After really enjoying getting into making jam this year, I’m planning a trio of preserves as Christmas pressies for various relatives. 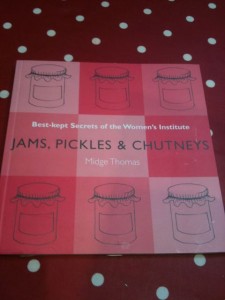 My mum has given me a fabulous book by Midge Thomas called Best-kept Secrets of the Women’s Institute, Jams, Pickles & Chutneys which is bursting full of seasonal recipes, fabulous hints and tips and a wealth of preserve know-how.

I was a bit nervous about making marmalade for the first time, so selected a recipe that didn’t require a great deal of faffing about. However I also wanted to find a preserve that had a bit of character, that you perhaps wouldn’t find in the shops.

Pink Grapefruit and Cranberry sounded perfect – zingy, festive and a bit of a quirky combo.

I’ve been saving my jars religiously so got them all washed up and warming in the oven.

I wasn’t prepared for just HOW MUCH marmalade I would produce. There was blinking loads of the stuff!!!!! I ended up filling really over-sized coffee jars with it! 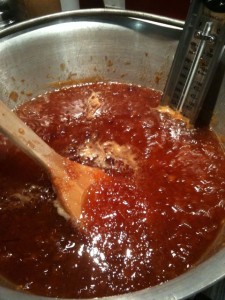 It’s great having so much though, coz as well as the Christmas gifts, it’s really nice to give to people as a little thank-you when you’ve been for lunch or they’ve picked your little one up from school.

We were all really unwell in our house last week, so the fabulous citrus smells wafting through the house as the marmalade bubbled on the stove felt really cleansing somehow. I don’t know about you but a bit of marmalade on toast is a wonderful first meal after you’ve not eaten for 24 hours coz of a tummy bug. 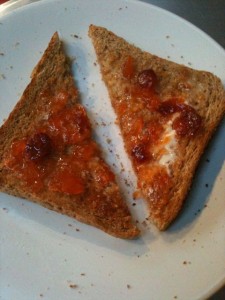 It’s a chunky marmalade with bags of zesty flavour that packs a punch but is sweetened by the cranberries. It’s great on hot buttered toast but also fabulous on toasted brioche!

I’ve just got a chutney and a jam to make and that’s one set of Christmas presents out of the way.

1. Placed the sliced grapefruit and the cranberries, wiht the water and the lemon juice or citric acid, in a large saucepan and simmer, covered, until the peel is very tender. This can also be done in a large casserole in the oven. (I performed the pectin test* at this point.)

2. Transfer the fruit and liquid to a large preserving pan and add the sugar (I warmed the sugar up in the microwave first), stirring until dissolved. Bring to a rolling boil and test for a set after 5 minutes*. It does set quite quickly – usually within 10 minutes. Remove any scum.

*For more details on performing a pectin test and also testing for setting point, see my blog post Jam Masterclass 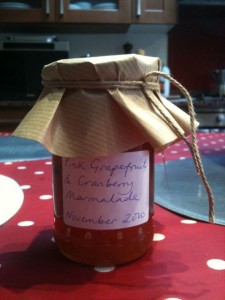