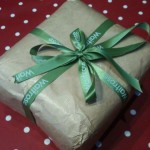 There’s been a lot of buzz around about Heston’s limited edition Hidden Orange Christmas Pudding with the candied orange inside. They sold out pretty swiftly – apparently the must-have dessert for foodies.

I always associate Christmas puds with old people. Like sprouts, it’s something as a child you’re encouraged during Christmas dinner to at least try a tiny bit of to show willing. It’s part of the Christmas experience, but not necessarily pleasant. Why eat things you don’t like out of tradition?! I’ve never understood that twisted parental perspective.

So when the folks at Waitrose offered to send me one of Heston’s coveted Christmas puds, I thought,  if anyone’s going to convert me, surely Heston can?! 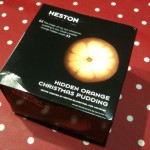 The packaging is sleek and alluring – not particularly festive but in-keeping with Waitrose’s more upmarket top-tier offerings like the Seriously range.

So I cooked it up in the microwave, and the kitchen was filled with the delicious aroma of Christmas. Sam was delighted and kept asking if it was Figgy Pudding, as he’s been singing about it at school.

The pud was a bit fiddly to get out of the plastic dish onto a plate in one piece, but I just about managed it. It was very soft and squishy. It was enjoyable cutting into it to find the hidden candied orange.

The taste of the pudding was intensely fruity and smooth, but it still had that familiar stomach-defying denseness that meant I could only eat about two mouthfuls.  Matthew felt the same way and after an enthusiastic start, threw in the towel. He thought the orange in the centre tasted like marmalade. 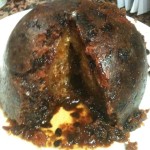 In a shocking twist the children liked it more than us! Maybe the love of Christmas pudding has skipped a generation?!

Waitrose also have a rather quirky Mince Pie Ice-Cream on the go for the festive season, so I was keen to give this a whirl too. I got it out alongside the Christmas Pudding just in case the boys didn’t like it and threw a strop.

The overall flavour has a zesty tang to it, and then you come across the little chunks of pastry which retain their crunch – absolutely gorgeous! 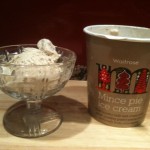 So although the Christmas Pudding is very tasty, I’m afraid I’ve not been converted to the cause. So Heston, you’ve won my kids around, but I’m afraid I just don’t have the stomach for it!

The ice-cream however, I could eat that quite merrily after my roast turkey!

Waitrose provided the Hidden Orange Christmas Pudding and Mince Pie Ice Cream for this review. I did not pay for either items.

Mince Pie Ice Cream can be purchased in Waitrose stores nationwide at £3.29 for 500ml. The Hidden Orange Christmas Puddings are sold out.