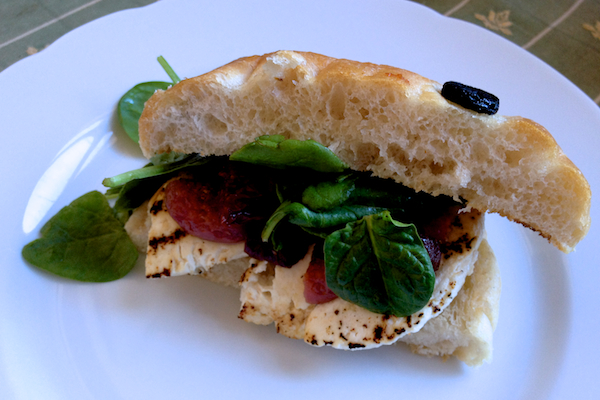 I never thought to try making my own cheese until I saw a demo at Lakeland over the summer and couldn’t believe how simple it looked.

Lakeland kindly kitted me out with the gear so I could have a go at home. Of course it sat untouched in my kitchen for a good few months as I lost my nerve, until Helen of Fuss Free Flavours and I decided to get off our derrières and have a cheese making day round at her place.

Yeo Valley provided us with a range of their fabulous organic milks, creams and yoghurts to work our way through most of the recipes in the How To Make Soft Cheese book from Lakeland.

You don’t actually need that much equipment but here’s the list: 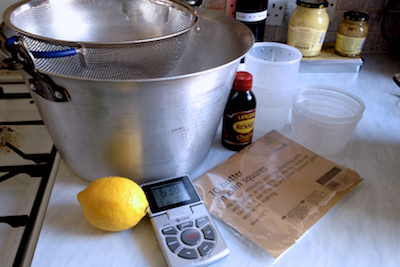 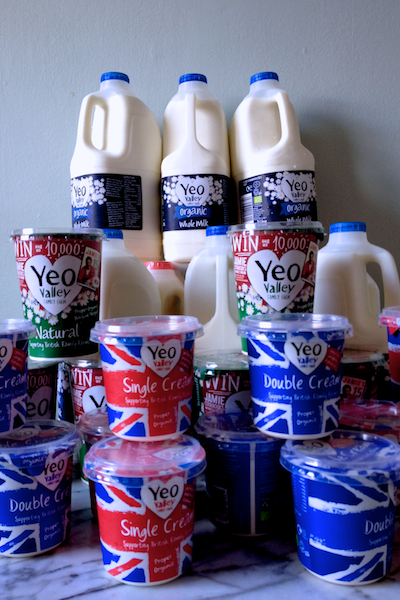 Yeo Valley kindly supplied all the dairy for our cheese day

The easiest cheeses to make are halloumi, ricotta and mozzarella, so those are the ones we attempted first. 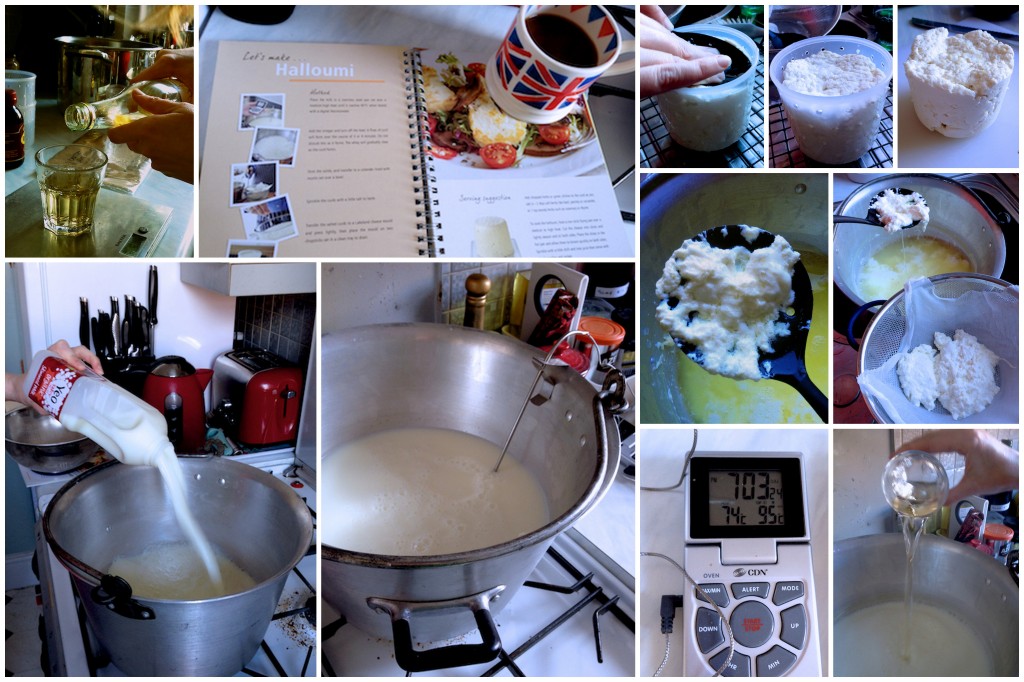 The process of making halloumi cheese

Our version of halloumi contains skimmed milk (the traditional recipe uses sheep’s milk), white wine vinegar and salt. You heat the milk until it reaches the required temperature. This is made easy using a probe thermometer that you can set to beep at you once the milk is hot enough. You do need to give it a stir as we found out when the milk caught on the bottom of the pan. Ooops!

Then it’s a question of mixing in the vinegar and leaving it to separate into curds and whey. You then strain off the liquid and pop the curds into a muslin lined colander, sprinkle with salt and then press into the cheese mould. You then allow this to drain and firm up.

You are instantly rewarded with a very fresh tasting firm cheese – we couldn’t believe how simple it was. So naturally we had to slice it up and fry it, and stuff it into an indulgent sandwich with salami, sun-dried tomatoes and spinach on olive bread – unbelievably tasty.

Next up was ricotta. Again milk is heated, then lemon juice is added to form the curds. This sits for a little longer before straining for a few hours. You then pop it into a cheese mould and let it sit for a few more hours still.

The resulting cheese was a little firmer than we thought it’d be, but is ready and waiting to be teamed with spinach as a pizza topping this week. 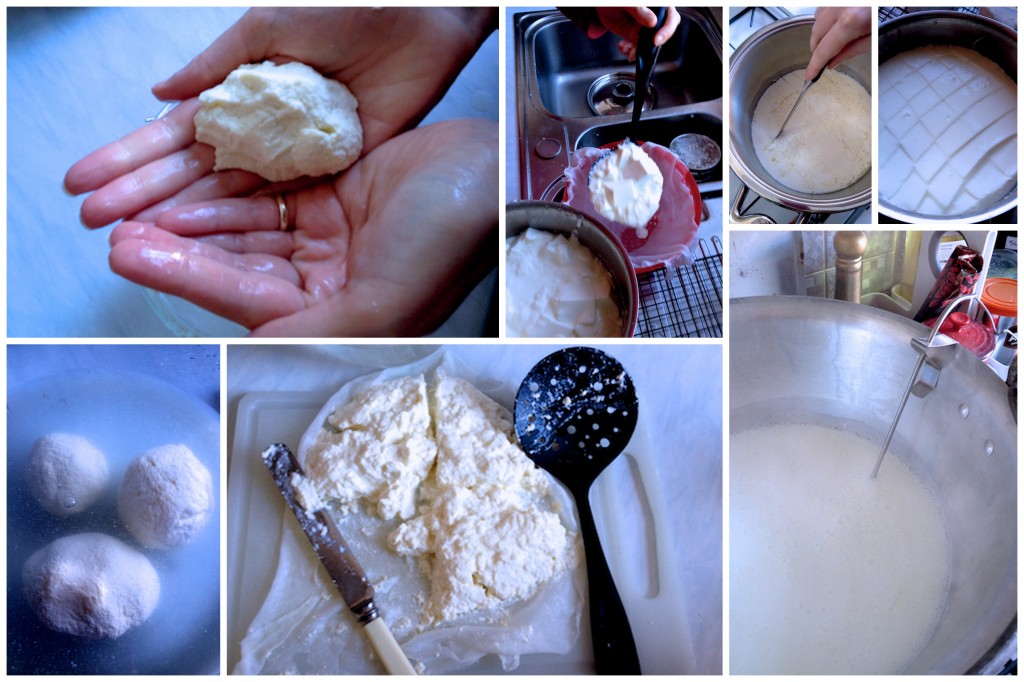 The process of making your own mozzarella

Making mozzarella was a little more hands on, so made you feel a bit more involved and clever 😉

After heating the milk, you add lemon juice and rennet, then after the curds have formed you have to cut them into cubes before straining.

Then you have to heat portions of the curds until the stringy cheese gradually forms enough for you to be able to form them into balls in your hands. You then plop them into icy water to set. Hugely satisfying!

And even more cheese

We also got some cream cheese and cottage cheese on the go, but these need to sit overnight so require a little more commitment.

I’d recommend getting milk and cream that’s about to go out of date in the reduced section of the supermarket to keep your costs down.

The equipment is largely stuff you’re bound to have in your kitchen already. The cheese moulds and muslin squares are only a few quid each. The thermometer is probably the biggest investment but can be used for loads of other things too.

Would I do it again?

Well now I’ve got the kit, yes I would. Halloumi is pricy and not always available in the shops so i’ll definitely be making that again.

It’s a really fun activity to do with kids on a rainy day to teach them about the science behind cheese making. Then you could even make your own pizzas and let them use some of their home made mozzarella for the topping!

A huge cheesy thank you to Lakeland for providing the kit, Yeo Valley for donating the dairy and to Helen for hosting such a fun day at her flat and the sloe gin we rewarded ourselves with at the end. 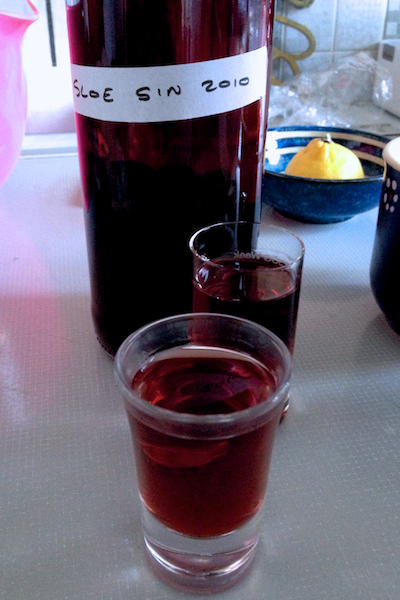