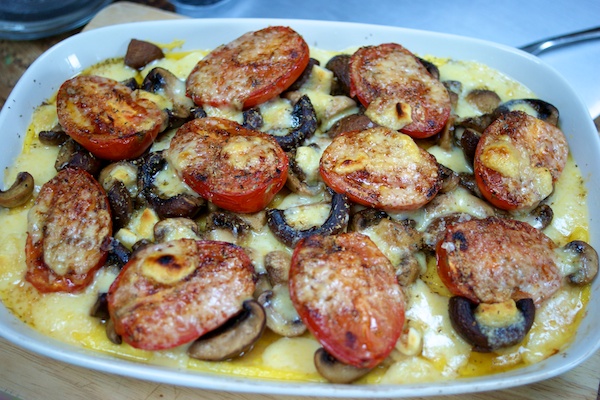 This is a tasty and filling one pot supper that’s as versatile as a pizza with what you can throw on top. I have to admit i’ve always been slightly dubious about polenta, but that’s only because i’ve never tried cooking with it before.

Well if you don’t know it’s ground cornmeal and regarded as classic Italian peasant food that’s been eaten since Roman times. To cook with it you simmer it in liquid and then leave it to set before typically baking frying it as the basis for another dish. In this case the base of a one pot bake that makes a refreshing change from old faves pizza and lasagne.

My recipe is based on one I found in Aldo Zilli’s brilliant vegetarian book Fresh and Green, but i’ve given it a bit of a tweak and re-written it here for you as the quantities weren’t working for me. Polenta is so filling we all decided you needed a fairly thin layer to form the base of the dish.

It doesn’t taste of a great deal, so you need some really robust flavours to put on top. I went with Aldo’s suggestion of tomatoes roasted with oregano and garlic mushrooms as we weren’t feeding the kids for this meal. I don’t know about you but there are some ingredients I don’t bother buying very often because the boys hate them, so I end up really missing them. This was a happy reunion…

1. Preheat the oven to 100C/80C fan/gas 1. Cut the tomatoes in half and put on a baking tray cut-side up. Season with salt and pepper, herbs and a generous drizzling of the olive oil. Cook for one hour.

2. Boil the polenta according to packet instructions – really making sure your stir it well. Pour it into a buttered baking dish, smoothing it into an even layer and set aside to cool.

3. Heat the rest of the olive oil in a pan and cook the garlic and mushrooms over a medium heat for 15 minutes. Spoon the garlic mushrooms over the polenta, then place the roasted tomatoes on top. Dot the cubes of cheese over the tomatoes and all around the mushrooms, then cook under the grill for around 10 minutes until the cheese is bubbling and golden.

4. Cut into wedges and serve with a big green salad.

If I made this again i’d try cooking the polenta in vegetable stock instead of water, and i’d try it out on the kids with the vegetables they like – roasted peppers, cherry tomatoes and sweetcorn perhaps.

Don’t underestimate how much you need to stir the polenta when you add the water – it’s a tricky beast and gets very clumpy and lumpy so give it some proper elbow grease!

If you’re trying to fill hungry tummies, this most certainly works.

As this dish is bustling with seasonal tomatoes I thought I’d enter it into Simple and in Season, a celebration of recipes using the produce most abundant this month in a blogging event from Ren Behan that I’m hugely honoured to be hosting this month. If you happen to be cooking a seasonal recipe then you can take part… check out the September page on my blog for more info.