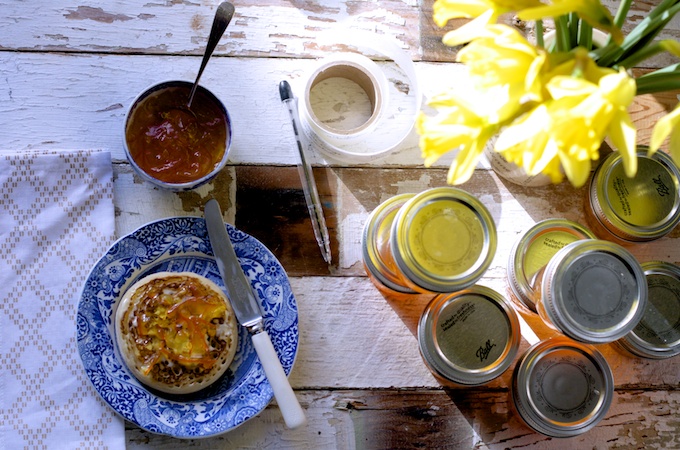 I’d never really understood the fuss about Seville Orange Marmalade… why would it taste any different from the marmalade i’d made before? Well i’d clearly been missing the point. My fab mum kept a bagful of Sevilles aside in her freezer for me to take back with me after half term.

And so when Vivien Lloyd sent me her new book First Preserves to review, it was perfect timing for me to make my first batch of Seville Orange marmalade using the more proper method.

I’ve made marmalade a couple of times before – Pink Grapefruit and Cranberry and more recently Orange, Rum and Raisin – but these were just the chuck everything in approach. They tasted great, but didn’t achieve that beautiful clear jelly flecked with perfectly cut streaks of orange peel.

But marmalade nirvana has now been reached…

It was certainly a labour of love. From juicing the oranges and retaining the flesh and pips in a piece of muslin, to painstakingly cutting the trim into even strips before leaving to soak overnight. 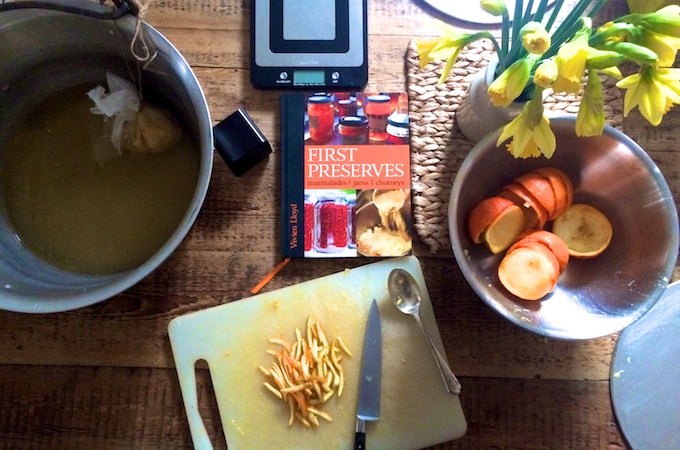 Then it was a case of slowly simmering the orange juice and water with suspended bag of orange melch, to soften the peel.

At this point, the bag was removed and a whole lot of sugar (warmed in the oven first) could then  be poured in and then dissolved. Time to get the sterilised jars warmed in the oven and to start boiling up the marmalade for the exciting part. 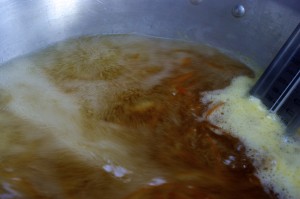 It always always takes me a long time to reach setting point. I’m tense about it, but I should have more faith. The books always say it should take 10 minutes, but I swear mine took at least half an hour. But then I did go against Viv’s advice at this point and doubled the recipe. 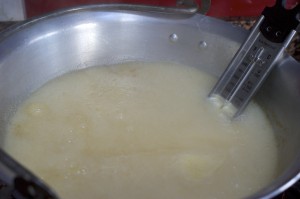 Followed by the ‘foaming cola’ stage

But after what felt like a lifetime it was time to get it in the jars. It still seemed a bit runny to me, but once it was in the jars it really firmed up. Viv advises to make small batches as it results in a better flavour – the bigger the volume, the longer you have to boil the marmalade and thus flavour can be compromised.

But I can tell you that despite taking longer to boil, my batch didn’t disappoint on the flavour front. When I sampled my first taster on some on toasted sourdough I was blown away.

Now I’m trying to resist the urge to have it for every meal. It’s DIVINE. Tangy and sweet in a way i’ve never tasted before. Well worth all the effort and only special people shall be receiving a jar 😉 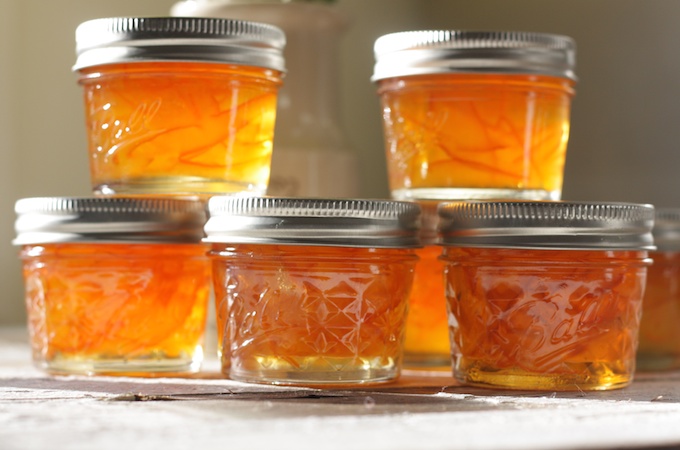 The night before you make the marmalade

1. Juice the oranges and pour the liquid into a large preserving pan along with the water.

2. Scrape out the membranes and pips with a small knife into a bowl, but not the pith.

3.  Juice the lemons, adding the liquid to the orange juice and water.

4. Chop up the orange membranes by hand or with a food processor and then pop in the middle of a piece of cotton muslin (I only had a cotton napkin to hand but it worked) along with the pips and tie up with string very tightly. Pop it into the preserving pan and tie to one of the pan handles.

5. Now slice the orange shells evenly to the desired thickness you’d like your shred to be. This takes a good hour or so, so be patient and put the radio on!

6. Put the shredded orange skin into the preserving pan, pop the lid on and then leave overnight to soak.

7. Bring the lidded pan to the boil and then turn the heat down and simmer gently for two hours. The peel should be really soft. Remove from heat.

8. Put the sugar in a large oven-proof dish and warm through in a low oven. While this is going on remove the muslin bag of orange mulch from the preserving pan, stick it in a sieve and then squash it against the sieve over the preserving pan to squeeze out all the goodness that helps the marmalade set.

9. Get your jars warming in the oven. Add the warmed sugar to the preserving pan and stir over a low heat until dissolved. Then bring your heat up to achieve a rolling boil (see pic above) and then it should progress on to look like what Viv describes as the ‘foaming cola’ stage.

10. Now you can start performing your setting point tests – I usually perform all three to be sure – thermometer, cold saucer, and flake tests. See my jam masterclass for a more in-depth explanation.

11. Once you’re happy, take the pan off the heat and let it stand for a few minutes. Carefully remove any scum that’s formed by pushing it to one side with a clean metal spoon, then scooping it out into a little pot.

12. Get your jars lined up and ready, then using a jug fill your jars with marmalade, tightly seal and leave to cool. Then label with the name of the marmalade and the date you made it.

Check out my review of Viv’s First Preserves>>> 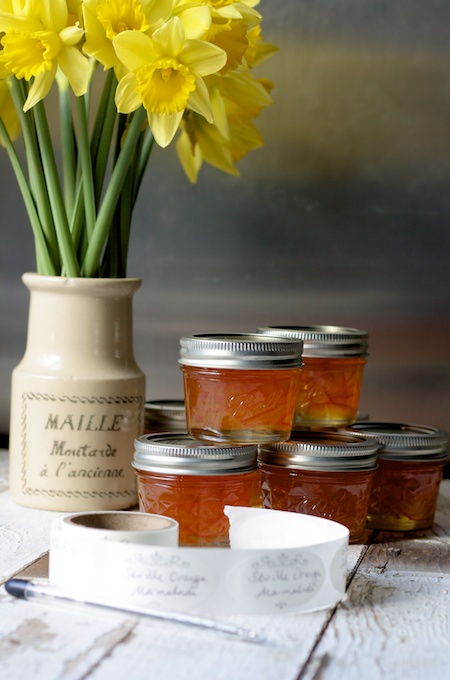