Reduced To Clear is back! Like the shelf in the supermarket where you often find a bargain amongst the dented cans of beans and kosher popcorn, this feature is about some of the recipes that praps haven’t gone so well but have redeeming qualities.

I like to keep things realistic. We all have our off days…

Tonight’s supper was a rapid version of the Russian classic Stroganoff. I picked it out of this month’s Good Food magazine on my never-ending quest for family-friendly recipes to keep my boys smiling.

It’s the kind of dish you get in a naff pub served up with rice, and not something I think to cook. Having a quick perusal at the history of the recipe, apparently in 19th century Russia it would be paired with delicious sounding crisp potato straws… now you’re talking!!

So I had a go at making those too. I just cut a few potatoes into skinny strips, parboiled them, dried them with kitchen towel and then shallow fried them until golden. Easy. The stroganoff had other ideas however….

Method
1. Heat the oil in a pan and fry the onion for a few mins, until soft. Add the garlic and paprika, and cook for 1-2 mins untiil fragrant. Add the pepper and mushrooms, and fry for 5-8 mins until softened.

2. Add the vinegar, boil to reduce until almost evaporated, then pour over the stock and bubble for a few mins until thickened slightly. Add the beef and cook for 2-3 mins depending on how rare you like it, then stir in the fromage frais and season.

I have to say this was tasty, but the fromage frais went all bitty when I stirred it in making it look hideously unappetising.

It looked so creamy in Good Food magazine – I felt a bit cheated.

Maybe the fact that I used very old red wine vinegar let me down?

Appearance is everything with Sam so he instantly didn’t want to eat it. Great. Matthew thought it was okay, but didn’t go wild for it. Arlo and I enjoyed it though!

Thank goodness I’d made the fries or I’d have had a mutiny on my hands. 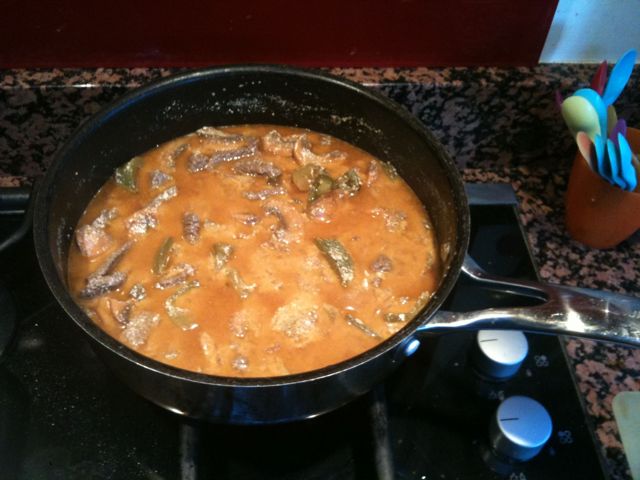 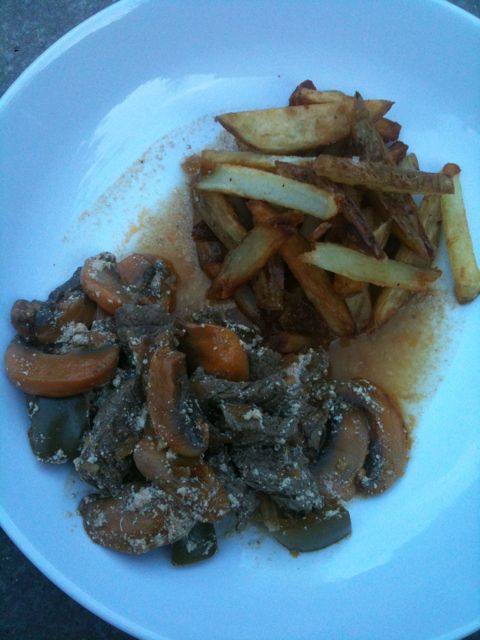