Another month, another delicious recipe from Amy Lane’s Bake it! club. Perfect fodder for Sam and I to while away a couple of hours while Arlo takes his nap. And lord knows we need activities – Sam’s first day at school has been pushed back to next week coz of delayed building works. How joyful.

Anyways, these cakes are quite simply, SUPERB. Light and fluffy sponge, fresh zingy apple in the middle and buttery cinnamon crumble on top.

They’re also brilliant for making with kids, coz there are lots of little jobs you can busy them with. Sam loved making the crumble mix, cutting up the apple, beating the egg and assembling the cakes.

He’s got really nifty with a knife lately – I know people will think I’m mad giving him a proper sharp knife to use. But he’s really careful and does a great job. Obviously I constantly monitor him. Does anyone else let their kids use knives when they’re cooking? 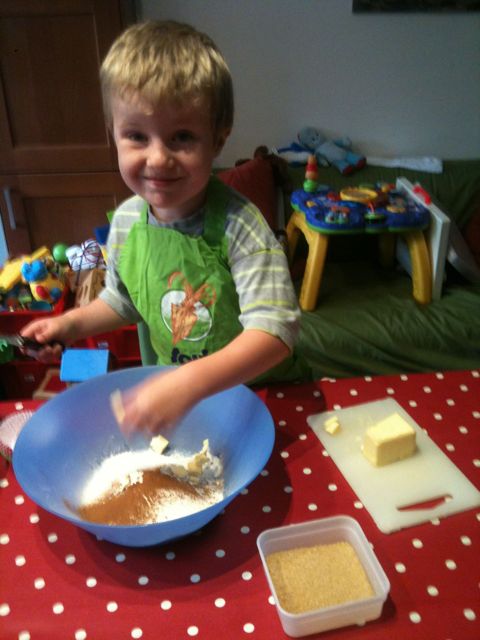 Here’s the recipe – it really is worth doing!

For the topping – (does make more than you need so you could get away with halving the recipe!)

2. Finely dice the apples and sprinkle with lemon juice to stop them going brown.

3. Next make the crumble topping. Sieve the flour and cinnamon into a large bowl. Dice the butter and rub it into the flour with your fingertips until it resembles breadcrumbs. Alternatively place the flour, cinnamon and butter in a food processor and blitz.

4. Stir the demerara sugar into the crumble mix and set the bowl aside ready to sprinkle over the cakes later.

5. Now make the cupcake bases. Cream together the margarine and sugar until light and fluffy. You can either do this with a wooden spoon or in a food mixer.

6. Beat the eggs in a separate jug and add them a little at a time to the marg and sugar mix. It helps to stop the mixture curdling if you add a spoonful of flour to the mix each time you add some egg.

7. Once all the egg has been incorporated, add the flour and fold in with a metal spoon. Alternatively, mix with your food mixer.

8. Divide the cupcake batter between the 12 cupcakes cases – each one should be about half filled, maybe a little less.

9. Next sprinkle some diced apple over the top of the cupcake batter.

10. Now add a tablespoon of milk to the crumble topping and mix. Then sprinkle it over the top of the cakes. I found I had quite a bit of topping left over, which I used to make some mini apple crumbles. But you could freeze it to use at a later date.

11. Bake for around 20 minutes until the cakes are golden and cooked through. The tops should feel springy when pressed lightly.

12. Leave to cool for 5 minutes in the tin then transfer to a wire rack.

They are delicious served warm with cream or ice cream, or once cooled with a cup of tea. The cupcakes keep well in a tin for a few days.

Now mine haven’t turned out nearly as perfect as Amy’s – I think I put too much cake mixture in and could have eeked it out to 14 or 15 cakes, not 12. The cake mixture kind of bubbled up through the crumble to give them a bit of a hotchpotch appearance. So they’re no lookers, BUT they are an incredible eating experience!

If you want them super-neat looking I’d only fill the cases a third full of mixture, then the apple and then probably less crumble topping. But if you believe in beauty being on the inside then just go for broke! 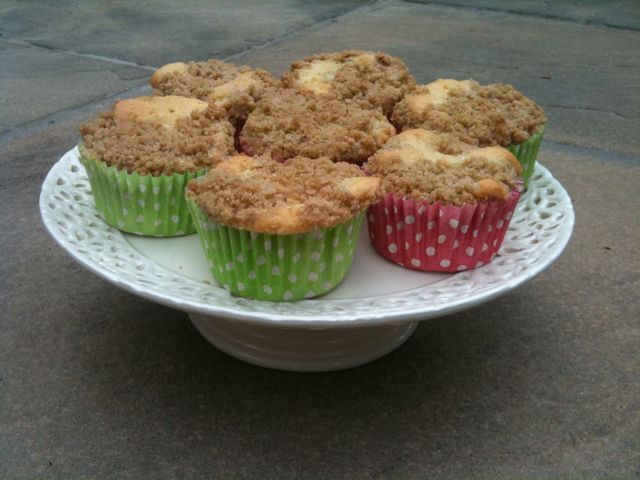