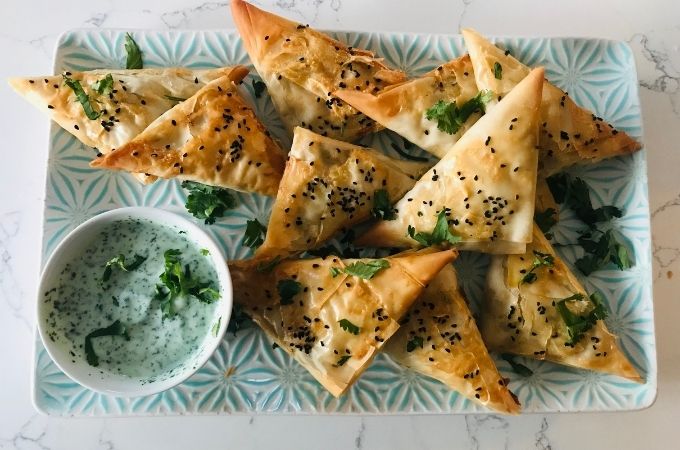 Super easy, super tasty, super slimming world friendly samosas made with crispy filo pastry and packed with a gently spiced sweet potato filling with tender sweetcorn and a pop of peas. Then there’s that little pot of minted yoghurt on the side for dipping… I DO love a dip.

Where have I been?!

It’s February half term and I’ve finally got some room to breathe and write my first blog post in a VERY long time! Where have I been? Well, working full time in charity comms – currently at an amazing organisation called IMIX who provide communications support and training to the refugee sector. It’s incredibly rewarding but all-consuming, hence coupled with feeding my now GIANT boys I’ve rather let my food blog slip.

BUT I’ve really missed it! Plus, I’m back on the Slimming World wagon – having rather spectacularly fallen off it since starting work full time, and then, lockdown – obvs.

Sooooo I’ve decided to get back into my recipe developing during my time off and share the results here with you lovelies.

So yes, back to Gina’s Slimming World class with me and last weekend it was a taster session. We were tasked with bringing something along for the group to try with the chance of winning a tea towel. That was it, the challenge was thrown down and I couldn’t resist.

I had some filo pastry knocking around, leftover from making this divine PON Fish Pie, and thought, I know, Samosas! Easy for people to grab in a group setting and you can pack them with the tastiest things. I’d never made them before so watched a few YouTube tutorials to get the hang of the folding and that was that. They really are pretty easy. 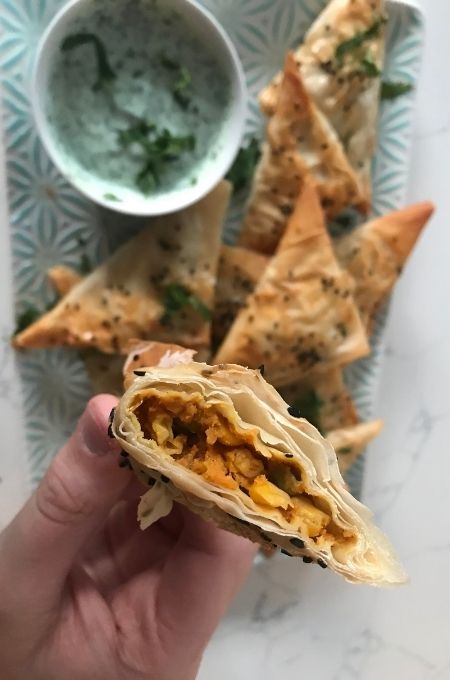 I’ve used filo pastry which is very low in syn value, I’ve used egg wash and fry light to crisp them up instead of butter and oil, and I used an egg yolk to make the sweet potato a bit creamier rather than butter. As ever with my Slimming World journey, I always focus on making my meals as tasty as possible, so I’ve spiked the filling with some gentle spice and topped the pastry with aromatic black onion seeds. And as for that Minted Yoghurt Dip – it’s just two ingredients and one of my absolute fave things – zero fat!!!!!

What else could I put in them?

I’m already thinking about different combinations for next time I make these. I was also thinking of doing the same recipe but adding  my healthy extra ‘a’ of feta cheese with some fresh ginger and chopped coriander. I also thought it would be a great way to use up some leftover roast chicken.

How do I make them Vegan?

Just lose the egg wash and use Fry Light to glaze and leave out the egg yolk in the filling. 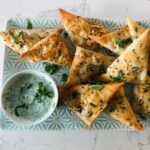 Make ahead and keep in an airtight container in the fridge, then when you're ready to go pre-heat the oven to 180'C fan, pop them on a baking sheet with some foil over the top so they don't burn and cook them for about 10 minutes until heated through and crisped up. 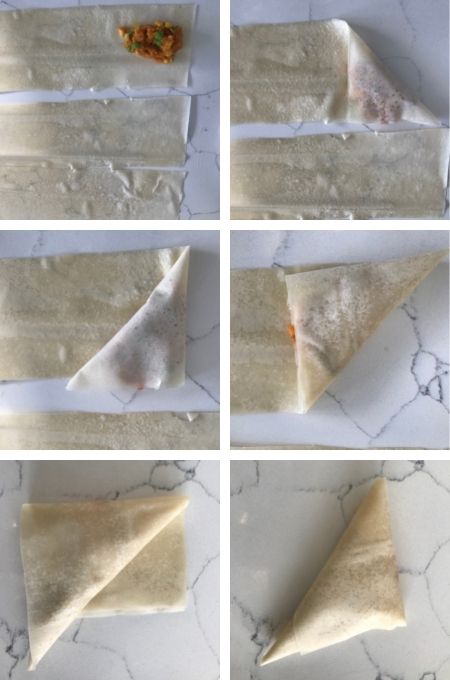 The tea towel of glory!

I took the entire batch to the taster session and they went down really well – result! There was some stiff competition as the group had brought in all kinds of delicious healthy treats including oat biscuits with chocolate, an amazing trifle and some cherry bakewells. It was a proper feast – especially welcome as I don’t eat anything before I step on the scales!

I’m very happy to say that the group voted my Slimming World Friendly Samosas the winning recipe, so I bagged the Tea Towel of culinary glory – yessssssss! Gina says it’s too good to use on the washing up though so I might have to just hang it up on the wall instead. 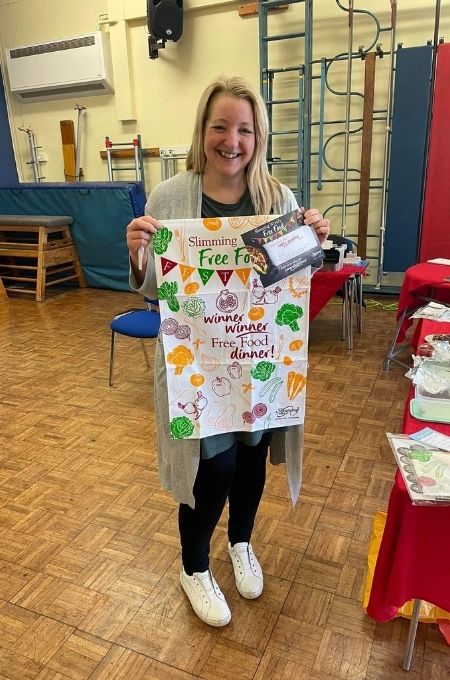 See you soon everyone – I’ll try not to leave it so long next time!!!!