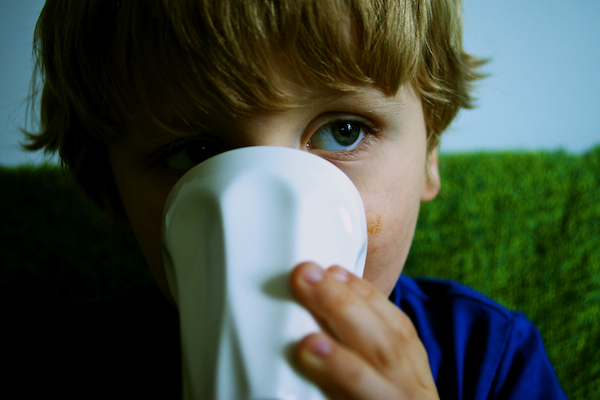 Giving children tea to drink isn’t something you see much of, as it’s seen very much as a grown up’s drink alongside coffee. But I’ve always thought giving the boys a nice cup of milky tea without sugar, is far better than a sugary squash or fizzy drink. Concerns about caffeine waft at the back of my mind, but I always make it very weak and top it up with lots of milk.

So I was pleased to see some research out this week that backs up my hot drink selection for the boys. A new review on caffeinated drinks in children by independent public health nutritionist and dietitian, Dr Carrie Ruxton has concluded that up to two cups of tea daily may be safely consumed by younger children, while older school aged children can consume up to three cups of tea.

Surprising stuff. Perhaps even more interesting is the actual reported benefits a small amount of caffeine can have on children. In controlled trials, attention, dexterity and memory tests showed that caffeine improved performance on attention and motor task tests and children felt less sluggish.

So Sam and Arlo’s milky breakfast cuppa sets them up for a good day at school! It’s definitely in the blood as my mother-in-law used to give my husband and his two brothers milky tea in a baby bottle when they were little.  I remember feeling very grown up when my mum let me start drinking it, I reckon I was about 8 or 9.

Maybe the next high street trend will be tea bars aimed at children?!

But what do YOU think about giving tea to children? Do you let your kids drink it? How old were you when you started drinking tea? Let me know your thoughts!