Waitrose are championing the British apple this month, and will be stocking loads of home grown varieties that you may  not have heard of like Estivale and Suffolk Pink.

Do you tend to stick to the same varieties no matter how far they’ve travelled? Well I’ve been challenged by Waitrose to try using a British variety of apple in a recipe and was sent a box load of Estivales. 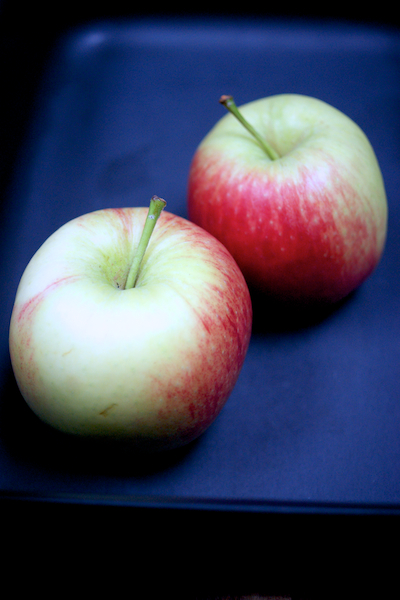 They’re absolutely HUGE, and a gorgeous colour. They’re crisp and sweet so have proved extremely popular with my apple loving family. It’s the fruit we eat the most of.

The Estivales are grown by Clive Baxter in Kent and the Simpson brothers in Ross On Wye.  It’s an early variety grown on a small scale in France and England, and are usually available in early to mid September. They were developed in the 1950s to improve on the Golden Delicious.

So what apple recipe to create?

I have plans to make my mum’s bramble jelly that uses apple, as well as an apple and almond crumble cake but it was a very traditionally British dish that was first in line.

I added large chunks of apple with the sausage and stirred some dried sage into my batter. It was a total experiment and I wasn’t sure what to expect. 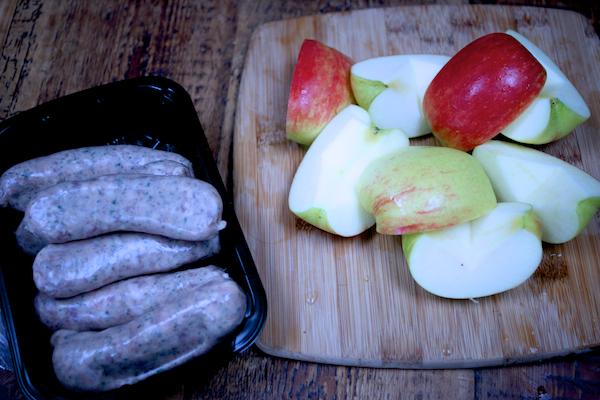 I panicked a bit when i’d browned off the sausages and apple to see how much juice had been released from the fruit. I was worried this would affect the batter. However it rose beautifully.

The apples gave the herby batter a gorgeous sweet quality that goes perfectly with the sausages. It’s probably a bit soggier underneath than my usual version, but the top crisped up well so it didn’t hamper our enjoyment!

The chunks of apple are a total delight, dotted about the batter and the perfect partner to the pork sausages. It’s kind of like having built-in apple sauce 🙂 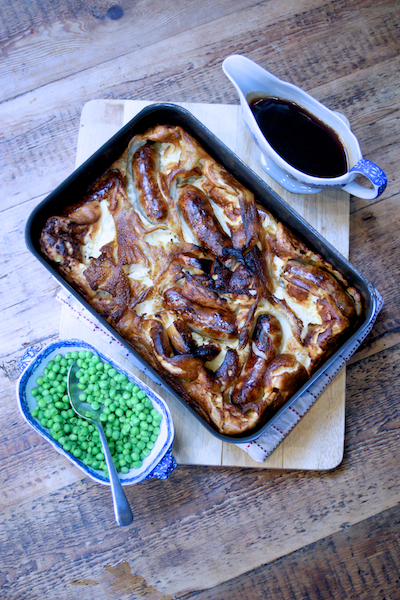 Apple and sausage toad in the hole
Feeds 4

1. Pre-heat the oven to 240C/220C fan/gas 9. Meanwhile put the flour, milk, eggs and sage with a good pinch of salt into a bowl and whisk until you have a smooth batter.

2. Pour enough vegetable oil into a roasting dish to cover the bottom (about 1cm deep) and brush some oil up the sides to grease the dish. Put in the oven until smoking hot and add the sausages and apple and bake for 15-20 minutes, giving a shake half way through.

3. Take out of the oven, turn down the heat to 230C/210C fan/gas 8 and pour the batter into the dish around the sausages and apples, then return to the oven for a further 20 mins. 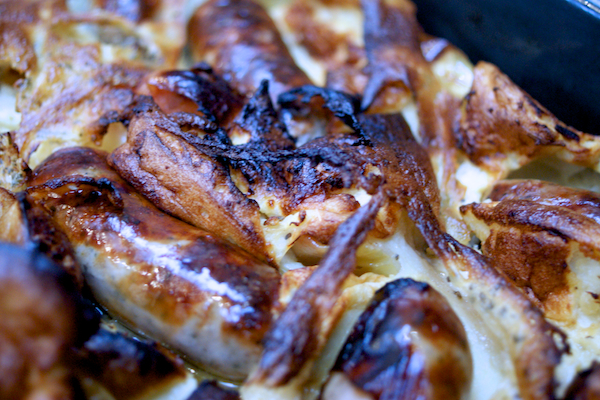 If you have any brilliant apple recipe ideas let me know as i’ve got a lot of apples – the doorbell just went and my neighbour popped in with another carrier bagful!

Here are some of my favourite apple recipes i’ve blogged about:

If you’re really bursting to share your own brilliant apple recipe, you can also pop on over and share it on Waitrose’s Facebook page for a chance to win £500 Waitrose vouchers.

Disclosure: I have been given a box of Estivale apples, plus vouchers for the Waitrose Cookery School in return for developing a recipe using British Apples.

I am entering this recipe into a couple of blogging events:

Four Seasons Food Sliding Into Autumn challenge… hosted this month by the award-winning Anneli over on Delicieux.

Cooking With Herbs hosted by Lavender and Lovage