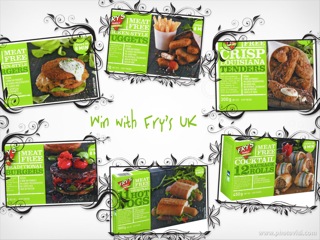 Greetings from the vegetarian firefighter! A few weeks ago we were sent some grub from a firm called FRY’s, a South African company that knocks out meat free meals. I’ve tried food from FRY’s before, which I enjoyed, and I like the way the firm goes about its business, as close to ethical as business can be. Thought it was only fair to add that.

Anyway, our family eat a lot less meat now and so it’s good to see how many alternatives FRY’s offer up to things like chicken nuggets and burgers, (things we had previously devoured in large quantities)

One of the advantages they have over their big rival Quorn is that their range is completely free from any kind of animal product including egg, milk and cheese. This is good news for folks (like me) who want to give food animals a break (as when chickens can no longer lay eggs and dairy cows can no longer produce milk they are sent to slaughter, there is no retirement home – sob!). This is also helpful for those with things like dairy intolerance or high-cholesterol. FRY’s range is cholesterol free!

The stuff we were sent to try included:

SLICING SAUSAGE / POLONY: This was quickly sliced and stuck in sarnies. Decent meaty taste although the kids were not completely convinced. I also cut thick wedges to chew on which helped me feel like an ethical caveman.

LOUISIANA TENDERS: I served these to the kids and the grandparents alongside sliced carrot and pepper. They were really popular and tasted lush – expect to see Louisiana Tenders rehab clinics appearing soon.

TRADITIONAL BURGERS: These were a reasonable alternative that would be great on a BBQ.

ORIGINAL HOT DOGS: One of the toughest things to say cheerio to when I turned veggie (alongside bacon sandwiches) were hot dogs. But dry your eyes Matthew, you self-righteous scallywag! Frys version is the business. Hot dogs in rolls with a bit of salad is a dead simple meal that even I managed with grace. The kids absolutely loved them!!!!!!!

CHICKEN-STYLE NUGGETS: Almost as addictive as the Tenders, these were a very pleasing and convincing alternative to the chicken version. Chow down!!!!

CHICKEN STYLE BURGERS: These were served with the Tenders. The kids and grandparents gave them the thumbs up.

Criticism of the range… looking at the nutritional value – protein, fat and carbs were sound however the salt content was nudging towards the high side. Also, the food is tasty but taking it out of a box and putting it in the oven will never be the same as a home-cooked meal from my fine looking wife.

Overall I thought the range was impressive. We’d probably eat this sort of stuff for family meals twice a week, especially if I was cooking. I’d also use it for kids’ birthday parties and for when the boys have pals around that are fussy eaters – particularly the hotdogs and chicken style nuggets. It’s not easy to get hold of but is worth the effort if you want simple kids meals that are thoughtfully produced.

The FRY’s range is available online as well from Goodness Direct, Holland & Barrett, health food shops and to caterers via 3663.

Thanks to FRY’s for sending through the review samples and for Matthew for writing this guest post. We have not been paid to write this review and is our honest opinion.

***WIN WIN WIN get your hands on a box of the same products we tried for this review in our brilliant competition. Click here to find out more WIN WIN WIN***