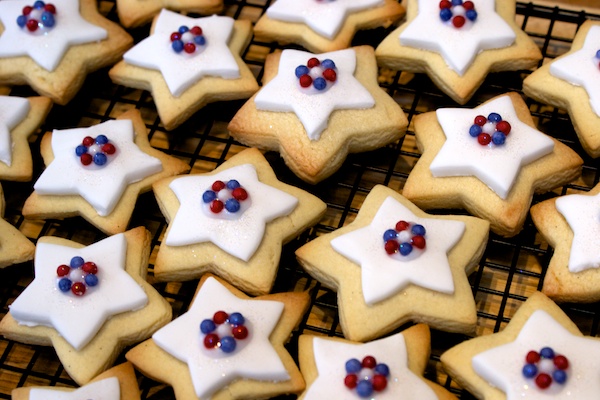 The American wing of the Bryson family are joining us in the UK this week. We will have two little girls in the Feeding Boys household, 2 months and 22 months, so we are beyond excited! To celebrate we’re going to throw a 4th July barbecue – let’s hope there’s a gap in the rainclouds…

With everything being Union Jack tastic this year in the UK, it’s virtually impossible to find anything with an American flag on. There isn’t a shortage of red, white and blue cake decorations though, so I baked up these mini star cookies as a nod to the USA star spangled banner.

I’ve also packaged a few of them up as part of the Sweet Bitesize Bakes swap – a cool baking event celebrating the launch of my pal Sarah Trivuncic’s new book Bake Me I’m Yours… Sweet Bitesize Bakes. I’ll be reviewing it in the coming weeks, but it’s a fab book bursting with cute little bakes that are ideal for summer parties. 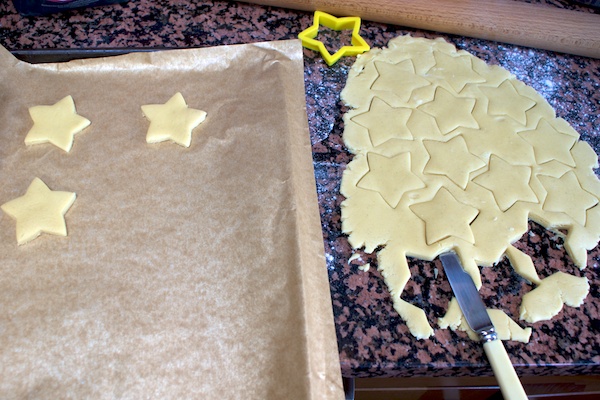 I used Sarah’s recipe for vanilla cookies for these star cookies. I have to say they turned out a treat, as I’ve had mixed success with cookie dough in the past. I used a mixture of butter and stork to retain some flavour but I think it helped with keeping them a bit firmer.

To top them I just rolled out some white fondant icing, stamped out stars slightly smaller than the cookies and pressed them on top. The red, white and blue sugar balls were stuck on with a blob of icing and finished with a touch of glitter.

Disaster struck when they were in the oven – the heating element decided to give up – so I had to finish baking them in my next door neighbour’s oven in the middle of her Canada Day party – what a legend! I am now without a functioning oven… this could be an interesting week! 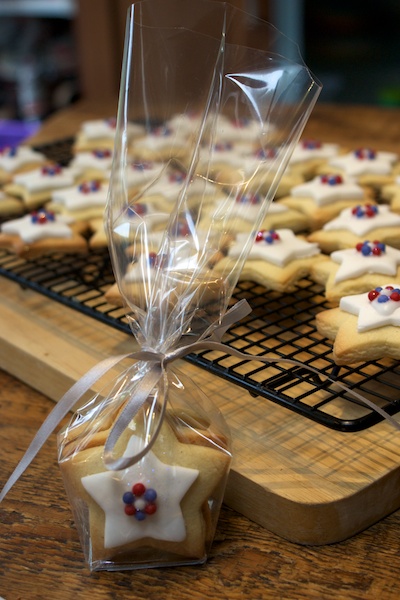 Vanilla Cookies – From Bake Me I’m Yours… Sweet Bitesize Bakes

1. Using an electric mixer, cream the butter and sugar until pale and fluffy then blend in the eggs and vanilla extract.

2. Stir the baking powder and salt into the flour and gradually mix into the batter to become dough.

3. Form the dough into two discs and chill for one hour wrapped in cling film.

4. Towards the end of the chilling time, preheat the oven to 180C/gas 4. Grease and line several baking sheets with baking parchment.

5. Sprinkle a little extra flour on your work surface and rolling pin, and roll out each disc of chilled dough to an even 5mm thickness. Cut into shapes as desired, placing them 3-4cm apart on the baking sheets.

6. Bake for 8-10 minutes until lightly golden. Allow to cool on the sheet slightly before transferring to a wire rack to cool completely.