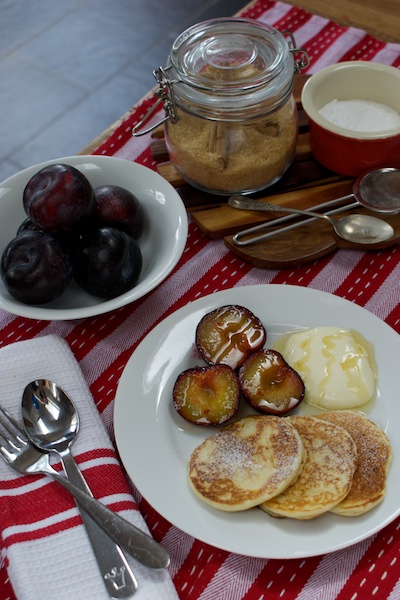 Glorious plums dusted with cinnamon sugar, grilled and served with a stack of griddled scotch pancakes, lashings of creme fraiche and a drizzle of honey.

It’s quick to make , but looks and tastes seriously impressive so is ideal as a dessert for wowing dinner party guests or even for a special birthday breakfast.

I was sent a huge George Foreman Grill and Griddle to test out, and this is the recipe I came up with for what seems like a never ending string of blogger challenges at the moment… This time it’s to celebrate National Get Grilling Week.

You can see what everyone else came up with for the budget of £30 to feed four people over on the Facebook page. Vote for your favourite who will be crowned Queen or King of the Grill.

I decided a dessert might be a bit different and tested the gadget to its full capabilities using both the grill and the griddle. The in-laws gave the dessert a very firm thumbs up – so whether I win the title or not, I’ve added a great new recipe to my repertoire. 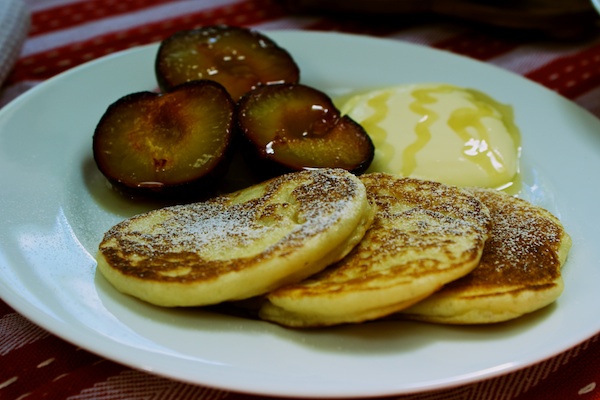 for the Scotch pancakes

*To make cinnamon sugar simply take a storage jar, add a cinnamon stick snapped in two then fill with golden caster or demerara sugar. If you don’t have time to make this in advance just use unflavoured brown sugar combined with a pinch of ground cinnamon.

Tip: For a lighter approach swap the creme fraiche for low fat yoghurt and ditch the icing sugar.

Thanks to George Foreman Grills for sending me the grill to try and also for covering the cost of the ingredients I used in this recipe.

If you’re hungry for more recipes using the Grill and Griddle, then check out Gary from Big Spud’s healthy take on a roast: Sunday Grill and Helen from Fuss Free Flavour’s tempting Lemony Maple Chicken Thighs