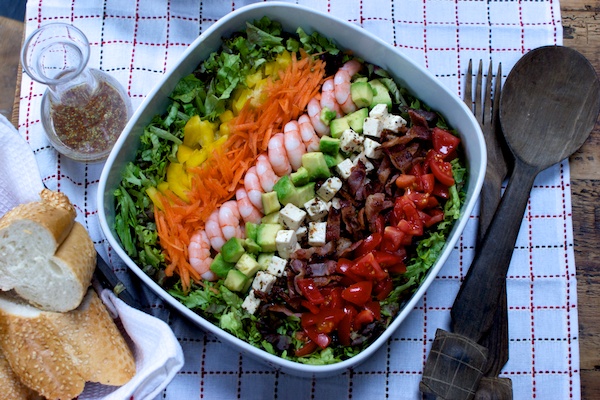 Simple summer salads are such a joy, they’re easy to put together and a great way to use up leftovers.

So i’ve taken some classic chopped salad ingredients like avacado and bacon, but also added my own favourites like juicy king prawns and cubes of Apetina cheese. 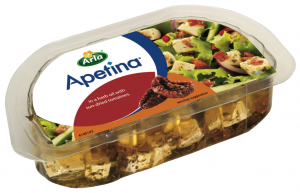 I use Apetina cheese as it’s perfect for adding to speedy salads as they come in handy tubs already cut into little cubes. My personal favourite are the marinated ones with olives or sun-dried tomatoes – so intensely flavoured but with a smooth texture.

There was a lady in Tesco handing out samples last week and we stood by her little pop-up counter for rather a bit too long enjoying her wares. Thankfully she didn’t mind, and we were going to buy some.

The aim of this salad is to make it look as colourful as possible so you can bring a flash of sunshine to your table. Because of the way it’s served, if there are ingredients that your children aren’t keen on, they can easily avoid them.

The dressing is light as it has no oil, but it’s intensely tasty with a sweet tone. The whole thing is best eaten with a loaf of warm crusty french bread on the side to mop up the juices.

1. Grill the bacon until crispy and then chop into small pieces.

2. In a large flat serving dish, a lasagne dish is ideal, create lines of each ingredient, building across until you fill it. Mix up the colours for maximum impact.

3. Mix your dressing ingredients in a jam jar with a good pinch of sea salt and freshly cracked black pepper and serve on the side. 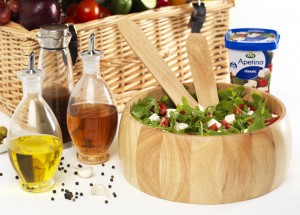 If you like the look of Apetina Cheese or this recipe, then head over to Facebook to vote. Visitors who like the Facebook page and vote for their favourite salad will be entered into a prize draw, for a picnic hamper (basket, with salad bowl and servers, plus dressing bottle). The final week’s prize will be a BBQ.