As a Home of the Houesproud Innovator for Morphy Richards, I normally review products myself.

However, this time I thought my mum would be the perfect person to give one of their Age UK products a thorough road test to see how it would go down.

I tested the Flavour Savour slow cooker last year, so I was interested to get mum’s feedback.

Over to you mum… 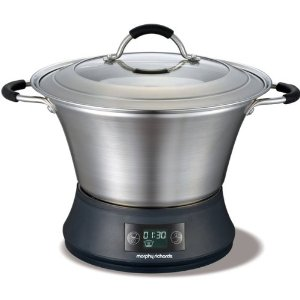 “When I was asked to test the Morphy Richards Flavour Savour, one of their appliances they are linking up with Age UK, I was very excited. I had never had a “slow cooker” and, although I am no longer cooking for a family, I thought I would give it a go!

Everything laid out to make beef casserole in the slow cooker

The Flavour Savour is a stylish looking appliance in stainless steel, which does not take up a lot of storage space as the base unit fits into the cooking pan, the cable and plug stow away neatly into the base unit.

I decided on a beef casserole, using the full capacity of the 4.5 litre pan. I used ordinary stewing steak, not best braising and thought I would use the slow cook function for six hours.

That was when I ran into a problem – I’m not “digitally minded” – I’ve been brought up with knobs and buttons! Having since spoken to several of my friends, as soon as I said ‘digital’ I was greeted with a look of horror – so I am not alone.

Ready for the freezer

However I persevered and managed to set it and six hours later there was a lovely result – tender beef, soft vegetables which had kept their shape and colour. As well as a good ‘one pot meal’ I was able to put several containers away in the freezer – easy meals for another day.

In principle I would recommend this appliance (once the digital programming has been mastered). I would have found it easier if the basic instructions had been on laminated cards instead of a book.”

1. Use the browning/sealing function to brown the meat and fry the onions.

2. Mix in the rest of the ingredients. Switch to the slow cook setting and cook for 6 hours.

3. Thicken with a cornflour/water mix to obtain the required thickness.

Thanks to my mum for the review and to Morphy Richards for supplying the Flavour Savour.

It’s assumed that our electrical products will be digitally controlled these days, so it’s interesting that the older generation don’t always appreciate this and often find it confusing and hard to get the hang of.