I’ve owned a fair amount of diet recipe books over the years, but to be honest they’ve never appealed enough to use them very much.

The food styling is usually non existent, and the recipes just don’t have any ooze appeal, you know, those tempting pictures in normal cookery books that make you want to cook and eat it immediately.

So I was a bit skeptical when Weight Watchers sent me their latest book to review. 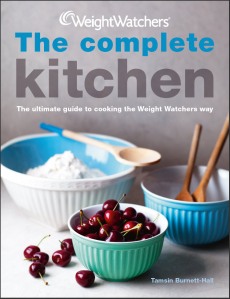 WeightWatchers: The Complete Kitchen is actually a very attractive book, it’s nicely styled and as the title suggests covers most essential areas of cooking.

After an initial flick through there are still pictures of meals that don’t look very juicy, but there are others that are so vibrant and appetising that they deserve a whirl in the kitchen.

The author is Tamsin Burnett-Hall, who I’d not heard of, but after a big of digging I found out she’s Leith’s trained, has worked for Delia and writes recipes for Good Food Mag. Her particular passion is creating non-dull diet recipes, so you can see why she’s been asked to write this book!

Who is it for?

Well people following the WW diet obviously, but maybe those of us who fancy a healthier recipe from time to time or are cooking for people who are on a diet.

I like the first chapter which has a selection of good everyday basic recipes which have been given the WW treatment – like white sauce, pastry and salad dressings. The things we use as the basis for lots of things.

The rest of the book is split into the usual logical sections like breakfasts, soups, salads and sandwiches, weekend suppers etc.

There’s a definite nod to the current economic climate too with a section of using up leftovers and also budget conscious meals.

I’m not hugely keen on the idea of serving up ‘diet food’ to my growing boys who are hungry every five minutes, but there are tempting looking family faves in here with a low-fat makeover like toad in the hole that uses balls of low fat sausage meat instead of whole sausages.

As well as some veggie recipes dotted around the book, there’s also a pretty big chapter of meat-free meals that look genuinley appetising and wouldn’t look out of place in an Ottolenghi book. So yes the dieting vegetarians are catered for very well indeed.

There’s the intriguing looking reipe called Kosheri, which is an Egyptian street-food dish of lentils, rice and macaroni topped with caramelised onions. The chickpea and courgette kofte with tabbouleh look great too.

I think vegetarian food gets away with being healthy but still attractive because of the use of bright colours and interesting textures.

Most likely to cook

Sausages with crushed new potatoes look easy and yum –  especially the spring onions and peas in a cream cheese and garlic sauce. If you’re cooking low fat it’s all about packing that flavour in and you really get a sense of that with this recipe.

Most of the recipes are pretty appetising, however Indian Shepherds Pie is one twist on a classic too far for me. Also Turkey and Sweetcorn meatloaf with lemon sauce sounds a bit wrong somehow.

Would you buy it for a friend?

Hmmm nope! It’d probably go down about as well as buying your friend a pot of anti-cellulite cream. It’s no reflection on the recipes, but buying this for your friend would be like saying “You’re a bit of a porker love – why not try cooking this way instead?!” No it’s one you buy for yourself!

7 – you don’t need to be following Weight Watchers to enjoy this book – it’s a good one to have on the shelf if you need to embark on some stricter healthy eating from time to time and need some inspiration.

But if you are a Weight Watchers follower then you’d probably rate the book higher as it has all the points values and alludes to the wealth of WW products to use in the recipes.

You don’t, however, come away having sussed out the new points system on the sly, like I was hoping to. They’re not stupid at WW – they still want to sign you up!

Thanks for my review copy