I have to confess that lentils have never seemed that appealing. Little dry discs lurking on the health food shelves conjuring images of Neil from The Young Ones and other stereotypical vegetarians.

But a few months into catering for the non-meat-eating-boy-and-a-firefighter I took a brave pill and gave some green lentils a little outing of the Shepherd’s Pie variety.

I have to say I was pleasantly surprised. It was a bit of a gamble as I decided to try a recipe that catered for 12 portions, designed to eat some now and freeze some for another day. I could have ended up with vats of nastiness, but the result was a very tasty and filling dinner. 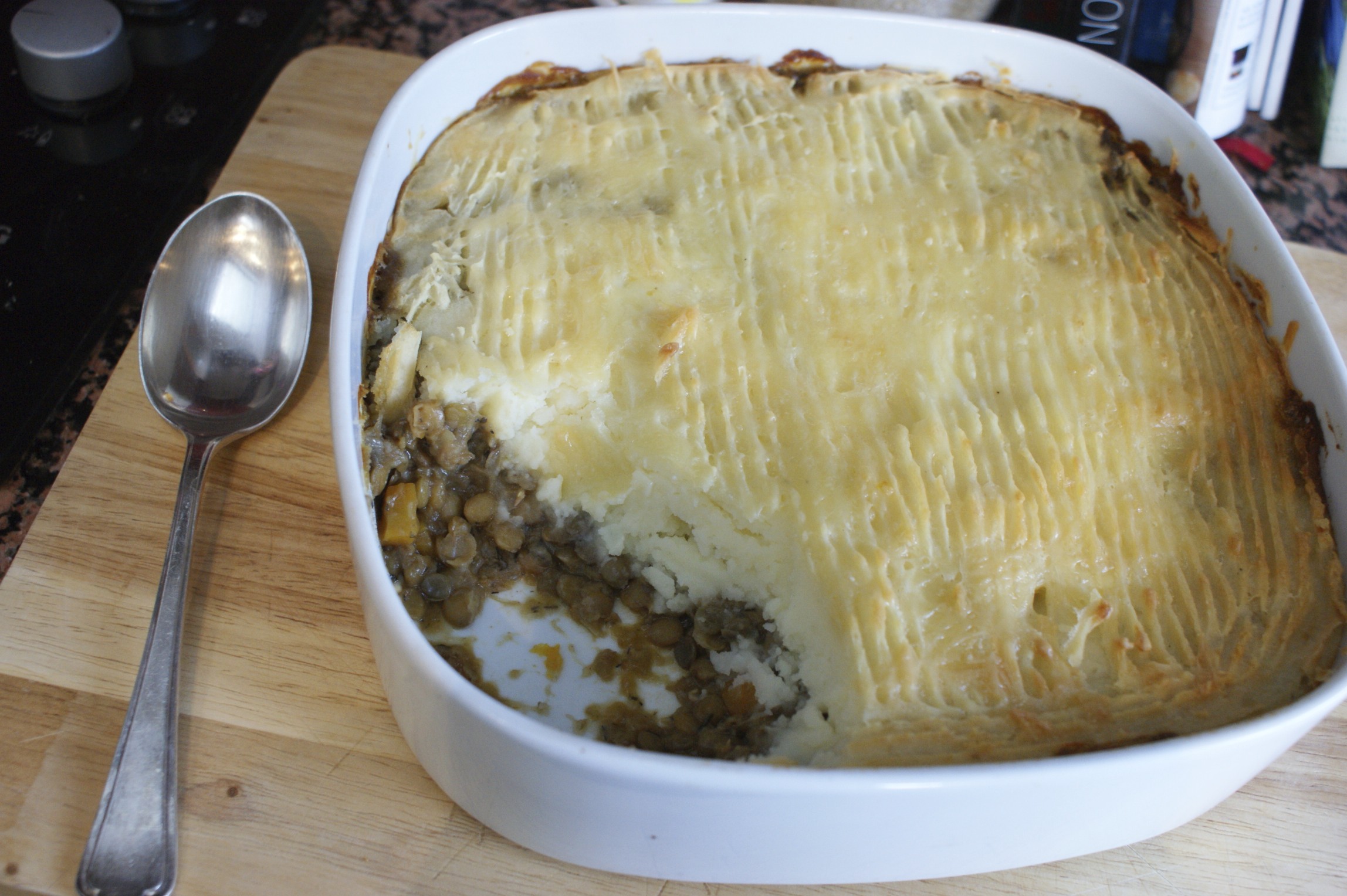 In terms of effort you’re investing a bit of time with the batch cooking to save you time in the future when you need to pluck a meal out of the freezer when you’re just back from holiday etc.

I put this together on a rainy thursday while the boys managed to amuse themselves without actually harming one another (minor miracle), and it wasn’t taxing at all. There’s a fair amount of chopping, but other than that it’s a question of slinging the ingredients in a big pot and letting it cook while you make the mash topping. 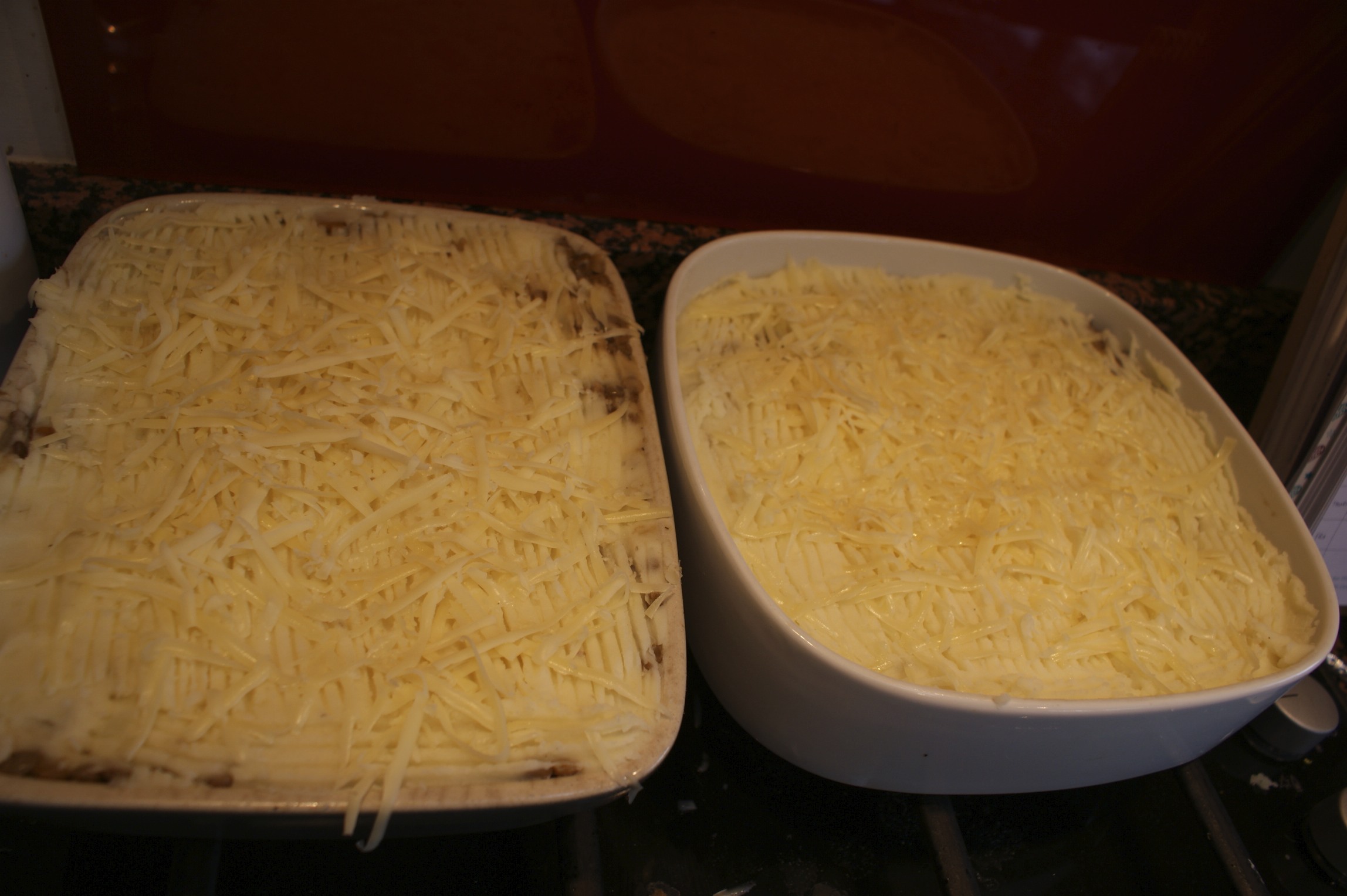 It makes LOADS. I filled two decent sized dishes and put one in the freezer for when we get back from France. We cooked up the square shaped one and it fed the four of us with enough left over for a couple of lunches for Matthew. Bargain! This really ticks a lot of boxes – budget, filling, vegetarian, tasty, easy…

I was also convinced that the boys wouldn’t like the texture of the lentils, but was wrong. Sam hoovered his whole portion up without so much as a whinge or whine about ‘how many mouthfuls do I have to have?’ which was a relief after some fairly irritating meal times of late.

So lentils, I salute you, I got you ALL wrong! 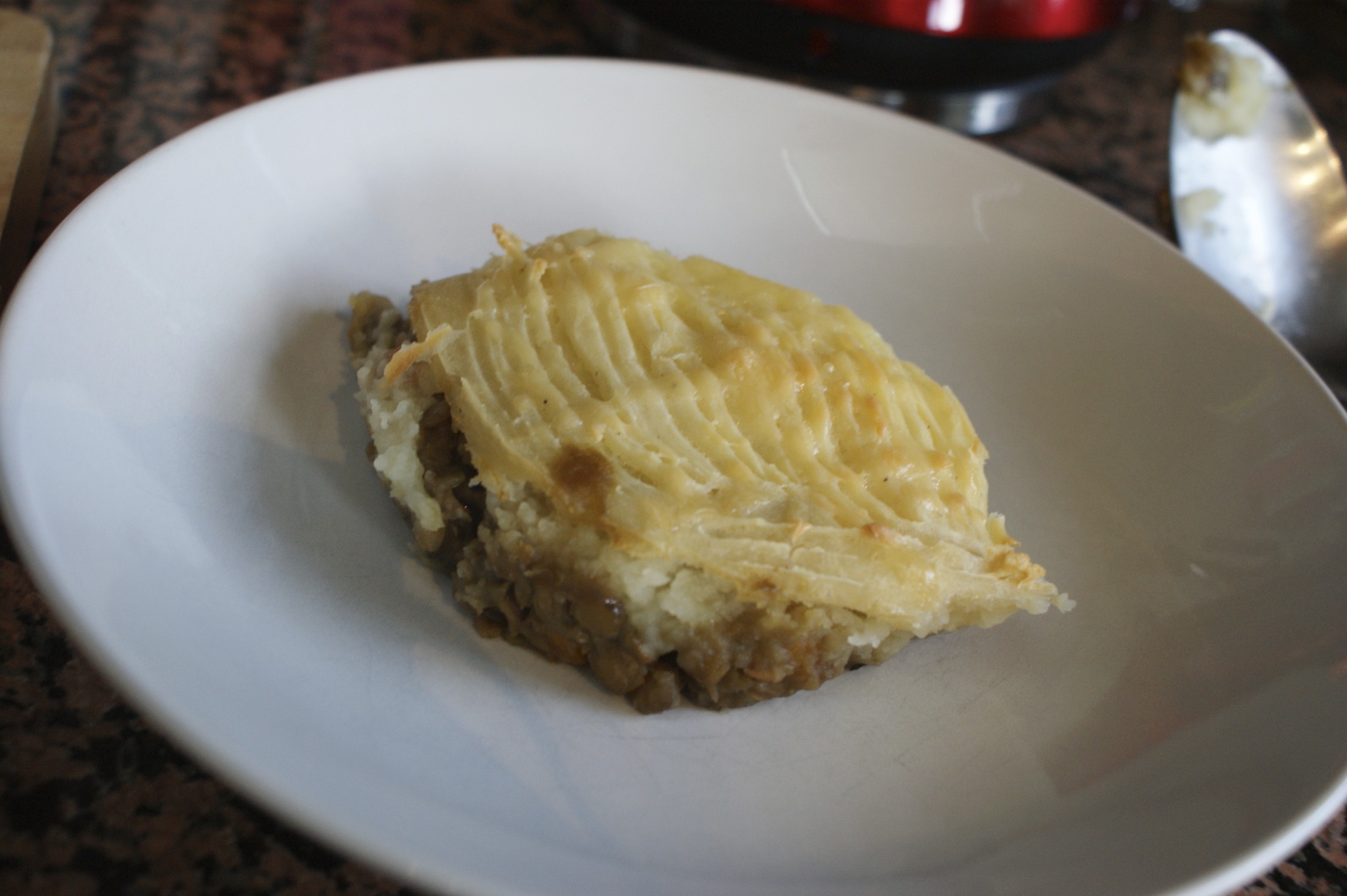 1. Heat the butter in a large pan, then fry the onions, carrots, celery and garlic over a gentle heat for around 15 minutes until soft. Increase the heat and add the courgette and cook for a further 3-4 minutes.

2. Add the herbs, lentils, tomato puree and marmite and give a good stir before adding the red wine and stock and stirring again. Simmer for 45 minutes until the liquid has reduced and the lentils have expanded and softened. Season and remove from the heat.

3. While the lentils are cooking get your spuds on the boil for 15-20 minutes until tender, drain return to the heat to dry up any excess water and then add the butter and milk, season and mash thoroughly.

4. Spoon your lentil mixture into the bottom of your dishes – I used two large ones but you could easily use multiple ramekins for individual portions. Then spread the mash evenly over the top with a final scattering of grated cheese.

6. If you’re going to freeze one then allow to cool and cover tightly with cling film or foil and freeze. On the day you’re going to cook it either get the pie out of the freezer in plenty of time for it to defrost, or cook from frozen covered with foil for about an hour at 160’C/140’C Fan/Gas 3, the remove foil and whack oven up to 200’C/180’C Fan/Gas 6 and cook for a further 20 mins until golden and heated through.