Some gadgets are used once and shoved in the back of the cupboard, others are like an intense fling that you use all the time for weeks and then get fed up of and relegate them to a dusty corner.

But then you find one that you realise has infinite possibilities and you will use till the day it breaks down. That’s how I feel about my ice cream maker!

I started off with firm favourite mint choc chip, but I thought I’d let you know about the two flavours I’ve made since.

First up was banana ice-cream which I made for a barbecue with friends – as soon as we put the meat on the barby the sky went black, thunder rumbled giving way to rainfall so heavy we couldn’t brazen it out in the usual British style. So the cooking was done under a brolly and we all de-camped inside to eat it.

Having some home-made banana ice-cream up my sleeve certainly improved the mood! 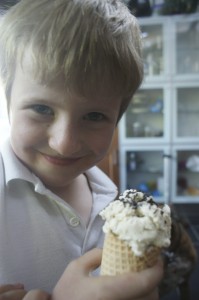 I mashed two ripe bananas and mixed it with a pot and a half of ready-made fresh vanilla custard then chucked it all in the ice-cream maker for 20 minutes until it was as thick as it would go. I then transferred it to a plastic container and put it in the freezer for an hour to thicken up even more.

The flavour of the banana really comes through beautifully and everyone loved it. I’d definitely recommend eating it on the day as even though it still tastes fine a few days later it’s not as intense.

You could always put a dash of maple syrup in there too which would go well.

I asked Matthew for inspiration for the next ice-cream adventure and he requested Nutella and hazelnut. This my friends, was the best yet! 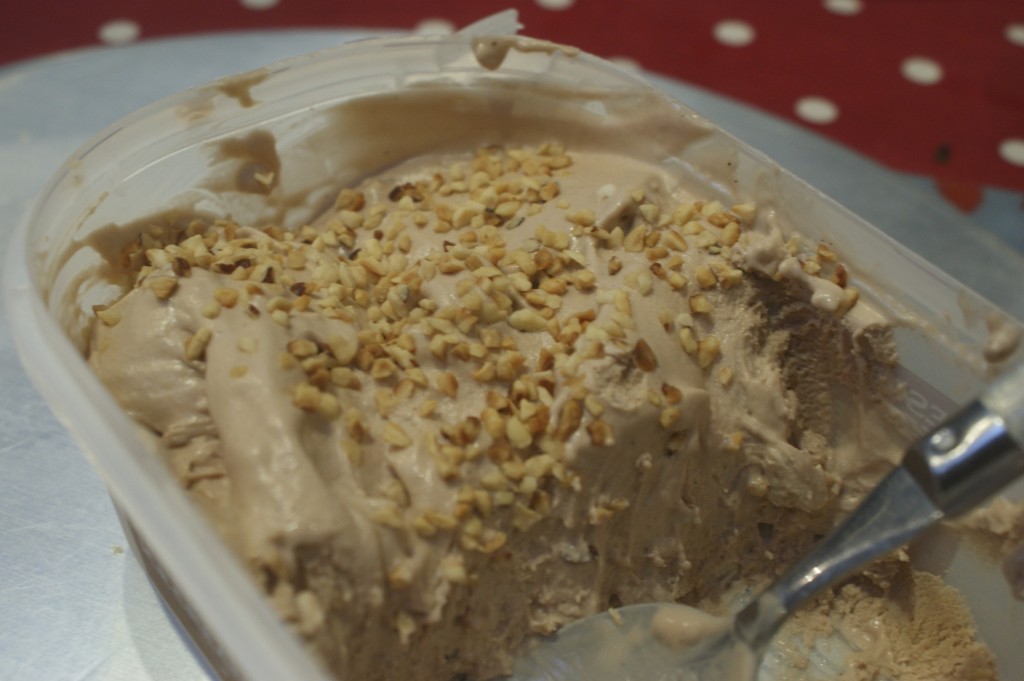 Again I used the lazy ready-made fresh custard as the basis for this recipe – a pot and a half. I mixed in a heaped dessert spoon of Nutella and the same again of toasted chopped hazelnuts. Churned it for 20 mins in the ice-cream maker and then poured it into a plastic container, scattered the surface with more chopped toasted hazelnuts and put it in the freezer to firm up for an hour.

I cannot recommend this flavour strongly enough… or indeed the addition of an ice-cream maker to your life.