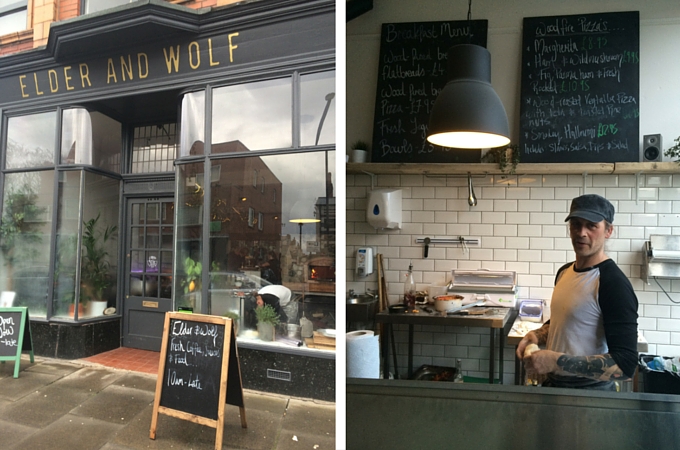 Elder & Wolf is the latest addition to the newly emerging food scene in Whitley Bay, and probably the most exciting yet. It specialises in woodfired pizzas, flat breads and what claims to be the poshest kebab in town.

But what immediately strikes you as you are welcomed into the warm hipster belly of Elder & Wolf, is the sense of hyyge that envelopes you like a gigantic hug.

I don’t know if you’re familiar with the Danish term hyyge, its rough translation is cosiness and we first came across it on a trip to Copenhagen. Think candlelit bars, expansive wooden tables, fluffy knitwear, lingering over fantastic food and wine with family and friends and you’re pretty much bang on the money.

The look and feel 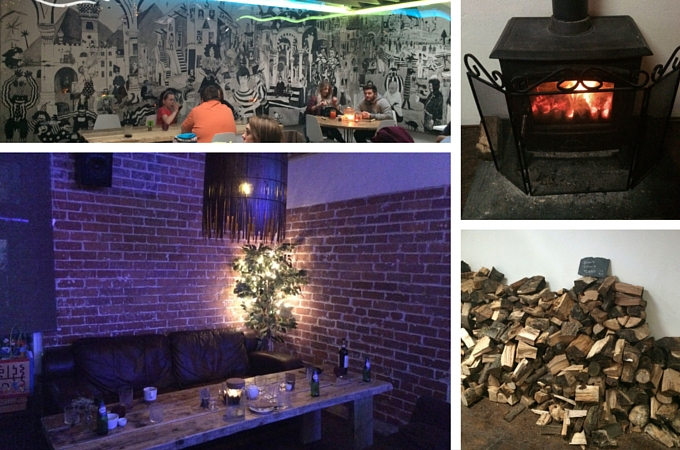 The large sweeping counter dominates the front of the restaurant, with the glorious oven on display.

I wasn’t expecting the restaurant to extend so far, and was bowled over by the sizeable backroom with log burning stove, leather sofas and an impressive mural that stretches across two walls.

Natural light floods in through several skylights, and when night eventually fell the candles that adorned the tables drew the cosy atmosphere right in close.

Couples young and old, families and friends catching up. A group of attractive bearded lumberjacks in checked shirts, no wait, they weren’t there, but would have fitted right in. 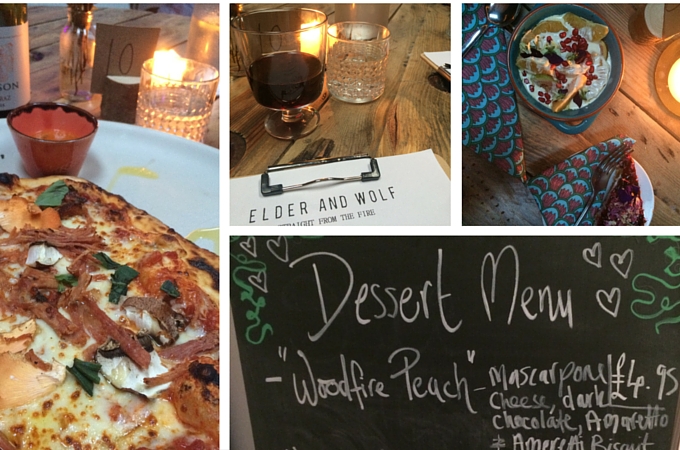 We were handed a simple one-page menu with four different types of pizza, a platter and the applauded kebab. I was relieved to see the food options in print after they’d been trialling a ‘walking menu’ when top North East restaurant reviewer Canny Food visited.

Sadly they’d run out of halloumi, so it was just as well I’d not brought my vegetarian husband as that wouldn’t have gone down well. However they immediately offered up a feta creation that sounded like a great alternative. Me however, as usual when I escape the house, I made the most of the meat options.

I picked the wood fired pizza topped with 12 hour wood roasted ham and wild mushrooms at £9.95. It arrived on an expansive white plate drizzled with olive oil and a pot of very feisty chilli sauce.

The crust was doughy and had that unmistakable hit of the woodfired oven. The salty strands of tender roasted ham were delicious coupled with the array of mushrooms. It was a hefty offering that took quite a lot of eating, so I was glad I’d walked there and walked home!

My dining companion tucked into Whitley Bay’s Poshest Kebab at £10.95. It consisted of a woodfired flatbread wrap with seasoned Northumbrian minced lamb, homemade garlic mayo, special chilli and cocoa sauce, with a splash of slaw. She tucked in enthusiastically and like me, was defeated by the portion but loved it.

Despite feeling so full, we both dived into desserts. The staff had just invented an intriguing creation that involved figs, honey and warm cream. It looked stunning and tasted sublime. Helen opted for a slice of beautiful cheesecake with berries and flowers – it’s safe to say she was pretty happy with it.

There’s no sign of a wine list or trendy microbrewery, so it’s bring your own booze which kept the cost of the night down – just a matter of £2 per person corkage.

We loved the laid back charm of the friendly staff and the fun vibe going on between the team. Nothing was too much trouble, they were attentive without hovering but not so laid back you felt neglected.

I loved the conspiratorial way dessert was introduced. “I’ve been experimenting in the kitchen and made up a new dessert that you might want to try”. It’s a really personal touch, and very effective because I wasn’t even going to have dessert!

Also it was a really busy evening for them and they’ve not been open that long, but their simple fuss-free menu coupled with plenty of staff on hand meant service ran smoothly.

Casual dining at its best – don your scandi knitwear, arm yourself with a bottle of your favourite tipple and cosy up to the wood burner to tuck into woodfired food until you can’t move. Despite it being April we’ve been in the grip of an arctic blast of snow, sleet and hail, so bring on the hyyge in Whitley Bay!

Disclosure: Elder & Wolf did not know we were reviewing their restaurant when we visited. We paid for our meal ourselves. All images and views in this review are my own.