A luxurious spin on the traditional Hot Cross Bun recipe, I’ve added dark chocolate chunks along with stem ginger and orange to the spiced dough. Have a go at making these aromatic buns for Easter – they take a bit of time, but are totally worth the effort as you split them open and slather them with butter. 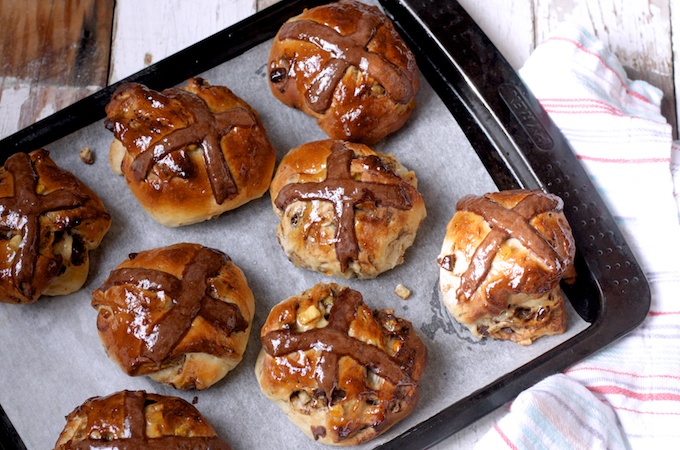 Waitrose have asked me to come up with a new flavour suggestion for a hot cross bun to help kick off their #WaitroseHotCrossBun competition which runs 14th – 20th March. The best one will be turned into a product that will hit the shelves next year!

If you want to enter, simply share your idea for a Hot Cross Bun flavour on Waitrose’s social media channels  Twitter, Instagram and Facebook using @Waitrose and the hashtag #WaitroseHotCrossBun. Find out more over at Waitrose Easter .

Waitrose judges will narrow down the entries to a final three and then there’ll be a vote on social media to determine the winner. The top flavour will be announced by the end of May 2016 – first prize bags £500 Waitrose vouchers with the two runners up getting £100 Waitrose vouchers each. Fingers crossed!

As well as loading my dough with mixed spice, orange, ginger and dark chocolate, I topped the buns off with chocolate crosses and a zesty seville orange marmalade glaze. A bit of sweet, a dash of spice and a touch of tang – I think i’ve got all my favourite flavours covered here.

I’m quite a lazy baker, so instead of kneading these by hand I took full advantage of the dough hook attachment on my KMix. I don’t make bread that often as i’m nervous it won’t turn out well. I’ve had a few disasters where the texture is just too dense and hits your stomach like a brick. However these turned out an absolute treat. A lovely crisp crust with the tangy marmalade glaze giving way to a soft and doughy interior that demands an indecent amount of butter.

The thing that takes the longest with hot cross buns is the rising and proving time, so you’ll need to set aside a morning or afternoon. It’s a good excuse to hang out in the kitchen though and you can get other stuff done while you wait for the dough to work its magic. 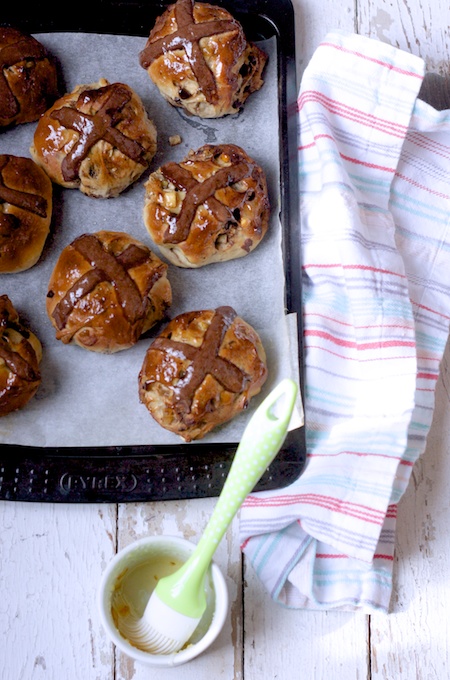 For the glaze
3 tbsp marmalade

Disclosure: This blog post was created in partnership with Waitrose