Last week I was invited behind the scenes at KFC. I’ll be honest, it’s not a place I choose to eat in having heard one too many horror stories about the welfare of the chickens.

It’s not that we’re totally averse to fast food in our household. For us it’s an occasional treat brought on by long motorway journeys or extreme parental tiredness. I’m pretty diligent about the boys’ diet so I try not to make a habit of it.

So I was really curious about what I’d find at KFC and naturally went with a long list of questions about nutrition and welfare. I thought i’d give you the lowdown on what I gleaned from the session.

Who did we talk to?

I was impressed by their open approach and willingness to answer any question we threw at them. They’re clearly on a mission to get the message out there.

So what about animal welfare? Where does the chicken come from? 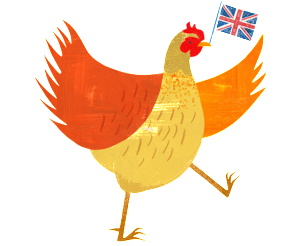 All of KFC’s on-the-bone chicken is sourced from Red Tractor certified British farms. However, according to the RSPCA, Red Tractor is not primarily a welfare scheme and “welfare standards for some species often simply reflect the UK minimum legal level with few additional requirements.”

A report last year backed by the Compassion in World Farming slated the Red Tractor label, which allows among other things chickens to be crammed into sheds with barely any space to move. Read more here

So what did the chaps at KFC have to say about welfare standards?

As well as sticking to the basic Red Tractor standards, they are committed to what they call a “natural enrichment” programme. This means introducing more natural light into the sheds where the chickens live and providing objects for them to climb on and peck at. These standards are currently in place at 75% of their suppliers, and they’re aiming for 100% by 2014.

They showed us a short video of what it’s like inside a chicken shed at Moy Park Farm, one of their suppliers. It was hardly a YouTube horror show, but it didn’t feel like a very natural environment for the birds at the same time. You can make up your own mind by watching it here

Not all of KFC’s chicken comes from Britain though

The meat in their non-boned products like fillets, popcorn chicken and zingers is imported from the EU, Brazil and Thailand. So how do they keep an eye on standards further afield?

Well they use third party independent inspectors to make sure the suppliers are committed to providing equal levels of standards to the Red Tractor label. They can’t raise the bar as high as the enrichment programme, but insisted that the birds have more space per square metre than in the UK.

I’d be interested to see video footage from these suppliers…

They have made a commitment to use 100% free range eggs and received a Compassion in Farming Good Egg Award in 2012… but how far have they got with this?

What it came down to with both the chicken and the eggs is cost – using free range/organic and therefore more expensive ingredients risks losing their “price sensitive” customers.

Supply is also an issue at play here. With 850 stores in the UK they need enough chicken to supply all of these outlets. KFC say there is not enough high welfare meat and eggs available to them. That’s quite depressing!

Overall conclusion on welfare? It’s refreshing that they have an awareness and are trying to improve things little by little. But at the end of the day if you’re really concerned about how the animals are treated that provide the meat for your meals and opt for free range or organic meat you wouldn’t eat in any fast food outlets.

So how about nutrition? 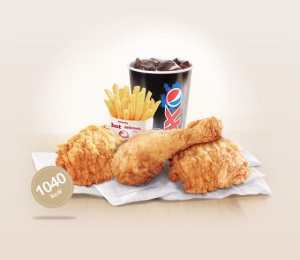 Fried chicken is never going to be something you should eat every day. The KFC ethos seems to be that it should be regarded as a treat, but they have a responsibility to offer more healthier choices on their menu for their regular visitors.

It’s almost irrelevant whether lots of people are actually buying the salads and grilled products, but it’s admirable that they’re taking responsibility for what they’re selling and what goes into it.

I’ll have fries with that…

Personally I like the fact that there are healthier sides to choose from at KFC like corn on the cob and baked beans – both options that my children would eat.

They also don’t salt their chips like they do at McDonald’s which is progress.

But what about wider salt levels? Well this is what they say…

We’re always looking for more ways to cut salt while keeping our menu tasty. This is why we signed the Government’s Salt Pledge – a commitment to keep reducing salt and provide regular progress.

I had a good scour through the KFC website and the mini fillet burger on the kids menu contains over half your child’s (age 4-6) recommended 3g daily intake. 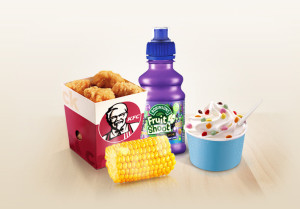 So while they’ve cut down on a lot of the salt in their products, there’s still a way to go. It was interesting hearing how they’re working with different sizes of salt granules and how this affects the way you taste food to try and achieve using less salt without people being able to taste the difference.

We took part in a taste test while we were there to see if we could spot which piece of chicken had less salt in, and none of us supposed foodies got it right. I mistook the chicken with a stronger flavour as being more salty, when this was actually down to other seasonings.

To be fair to them, they don’t hide the salt, it’s there for all to see on their website, so as a parent you can make a calculated choice about what you feed your child if you happen to take them there.

If you stick to the on-the-bone colonel’s recipe chicken, you’re getting fresh British chicken, it’s never frozen, and it’s prepared in store by hand.

The only product that isn’t prepared in store is the popcorn chicken.

I went in feeling sceptical and came out feeling informed and pleasantly surprised by the team’s warmth and genuine desire to improve the standards in both welfare and nutrition.

Would I start eating at KFC?

We won’t go as a family as they have absolutely no vegetarian options, but I certainly feel more comfortable with the idea of taking the boys there should the need arise. Plus their zinger chicken salad is DELICIOUS and only 295 calories 😉 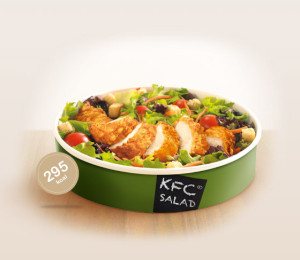 Thanks to the team at KFC for inviting us along to their head office in Woking. The cost of our travel was included and we were fed till we were fit to burst. These are my honest views and I have not been paid to write this blog post.