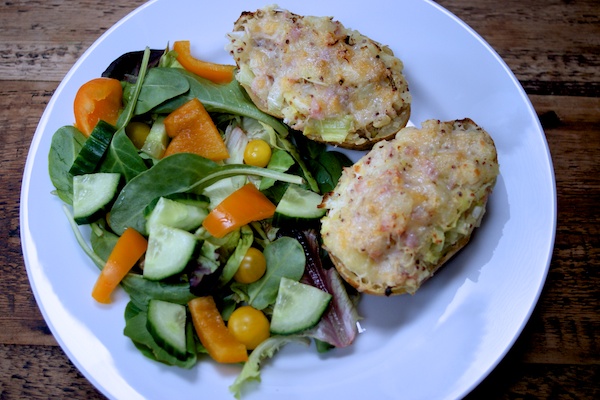 I first tried jacket potatoes made like this when I was a little girl on holiday in the Isles of Scilly. It was such a memorable trip, I must have only been about four years old but we flew there on a helicopter and spent most of our days on what I called ‘Delia Smith beach’ pretending to cook with the sand. I guess i’ve always been kind of obsessed with experimenting with food!

We went to a cafe while we were there and had the most delicious jacket potatoes i’d ever had. The baked spuds were hollowed out, mixed with butter, cheese and ham and then put back in and flashed under the grill. It was the first meal I remember eating out and i’ll never forget what a taste revelation that was to me.

I’ve always called them Scilly potatoes, and now really enjoy making them for my boys who love them too. They’re great for those of us on a budget and a bit more exciting than a standard jacket spud. 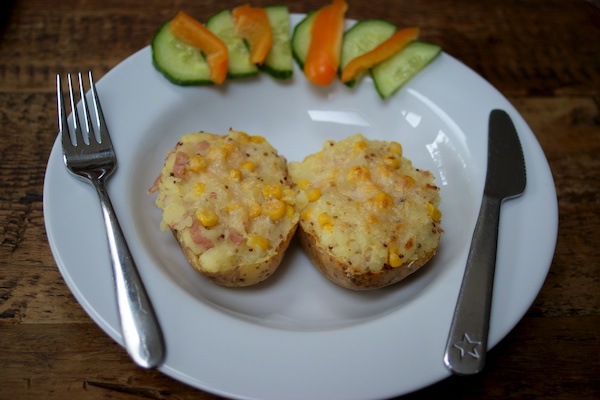 The beauty of making these is that you can put whatever you’ve got knocking about in your fridge in them.  A great way to use up leftovers and you can customise each potato according to that person’s tastes.

Here’s what to do… I’ve not specified amounts in this recipe as it’s really a bit of this and a bit of that according to taste!

1. Bake the potatoes in the oven for at least one hour until the skins are crisp and the insides soft and fluffy. If you like you can rub olive oil and sea salt into the skins of your potatoes before baking to make them extra crisp and delicious.

2. Cut in half lengthways, and using a tablespoon scoop out the potato flesh into a bowl. Mash in the butter and cheese, then mix in the rest of your chosen ingredients.

3. Spoon the mixture back into the potato skins, pressing down as you go so it all fits back in, sprinkle the tops with a bit more cheese and then flash under a pre-heated grill until golden and bubbling. Serve with a load of salad.

tip: go easy on the amount you add to your potato mixture otherwise it won’t all fit back in!