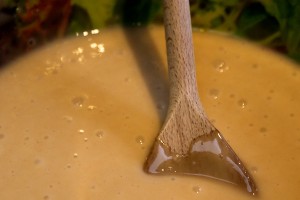 Herman the sourdough starter bubbling in his bowl

He’s a special sourdough cake starter, and came with a list of instructions. He’s pretty low maintenance – he sat on the kitchen surface in a bowl with a tea towel over the top. He mostly just needed a bit of a stir once a day, but on two separate occasions needed feeding a combination of flour, milk and sugar. Far more straighforward than the boys…

Turns out it’s the baking version of a chain letter (but less sinister), as once you’ve looked after Herman for 10 days you divide him into four, bake a special cake with one part, then pass the other three portions on to other people to carry on the process.

It’s been widely written about on the web, including this feature on Word of Mouth, but I’ve clearly been living in a bunker as I’d not heard of it.

The cake was full of delicious ingredients like apples, raisins and cinnamon, so smelt incredible when it was baking. The boys gathered around the plate once it was out of the oven, clamouring for a taste. It was quite an effort to get this shot of the cake without someone’s fingers picking the top off it. 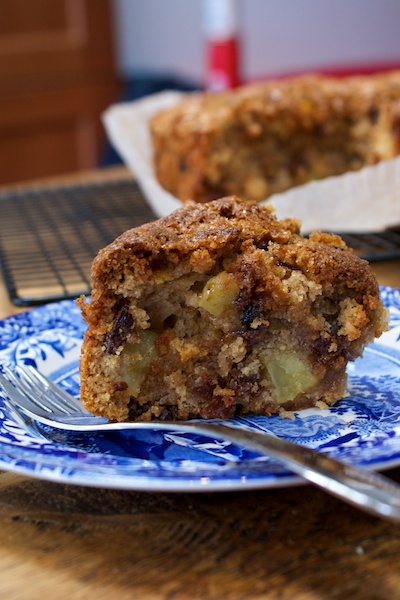 A slice of German friendship cake

It was a moist, fruity, cinnamon-spiked sponge with a crispy brown sugar crust – SO good with a cup of earl grey on a rainy bank holiday weekend!

I altered the recipe slightly by using corn oil and sultanas and cooked it for an hour instead of 45 minutes.

Herman originates from the Amish culture’s love of sourdough recipes, and the starter mixtures were shared within the community for everyone to cook their own creations with.

You can find out more about it on Herman’s website where you get full instructions of how to look after it, the recipe for this amazing cake and more importantly how to make your own sourdough starter if you want to start a chain of your own.

If you have cake-loving friends they’ll love you for this. It’s also a cute project to do with the kids.

Have you encountered Herman yet? Have you made any other recipes with the sweet sourdough starter?