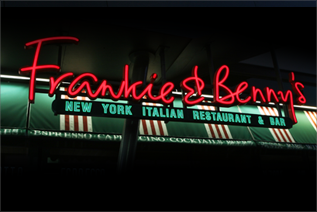 Frankie & Benny’s – the red neon signage hovering above neatly striped canopies greets you at many a cinema multiplex and drizzly high street, but have you ever ventured inside?

I’d been about once or twice with Matthew in the early days of our relationship when we had time to kill before a film, but those pre-children days are hazy to say the least.

So I was curious when I was invited to try out their new menus and family friendly vibe.

Frankie & Benny’s is a chain of Italian-American themed restaurants, the first opening its doors in Leicester in 1995 with over one hundred to follow around the UK and beyond.

The back story of Frankie & Benny: Frankie moves with his family to New York from Sicily in 1924  at the age of 10, settling in Little Italy to open a restaurant that gets handed down the family and eventually run with family friend Benny – is apparently fictional. The fact that they needed to create this story is a little on the twee side, but it sets the scene nevertheless.

The interior is cosy with a 1950s vintage feel. Dark wooden booths, sepia-toned pictures of Frank Sinatra types in trilby hats and fresh faced staff bustling around efficiently in waistcoats and ties.

It’s bang on midday on a wet and windy Good Friday when we join the throng of families eating in the North Shields branch, just outside Newcastle. It’s pretty chocka but we manage to get a table overlooking the open kitchens.

Very much in keeping with the high levels of hospitality in American restaurants, our host was super-friendly and made sure we had everything we needed throughout the meal without being too intrusive. She was happy to explain the menu and didn’t cringe at the amount of serviettes we got through with our mucky crew. 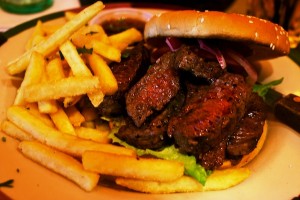 The quality of some of the ingredients exceeded my expectations. Eating at chain restaurants is not always an inspiring experience but I have to say the 7oz rump steak in the Steak Burger (£12.45) was excellent and the highlight of the meal.

Well seasoned, perfectly cooked to my specifications and full of flavour.

Our host explained that the beef is one of the new additions to the menu – now being hung for 28 days to mature instead of 21 days as previously.

The Warm Dough Sticks and Dips (£3.95) I had for my starter however were less to write home about, large and stodgy for a starter. 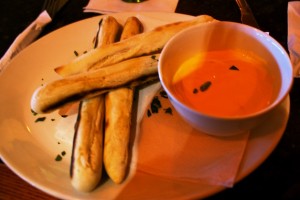 The Pepper Jack cheese dip accompanying them was like the orange liquid cheese you get with your nachos at the cinema. Now I’m a fan of plastic cheese, but I prefer to eat it in the dark where no one can witness my filthy habit 😉

The vegetarian offerings were few and far between – with only about four items to choose from off the huge menu. Our host acknowledged this unprompted and said that we could ask for anything off the menu and the chefs would be happy to adapt it to a meat-free option. Impressive but we didn’t put it to the test.

Matthew opted for the Mozzarella and Tomato Salad (£4.95) to start which he said was great apart from the excessively doughy dough balls which seemed an unnecessary addition.

He then moved on to the Mediterranean Veg Burger (£9.45) which he was really pleased with as it was so juicy and not dry like a lot of veggie burgers. The patty was made up of red peppers, olives, sundried tomatoes bound with mozzarella cheese. 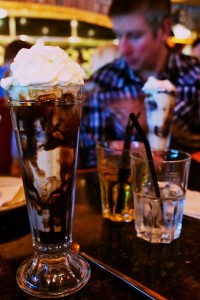 The tower of ice cream dessert

Despite feeling pretty stuffed, we gave the new dessert menu a spin for the purposes of this review. We were drawn to the sundaes and had the Chocolate Fudge Brownie (£5.25) and the East Coast (£5.25). Mine was a mishmash tower of ice cream filled with maltesers, chocolate chunks and marshmallows topped with whipped cream. Very very sweet, so I enlisted the boys to help me finish it!

Food for the children was split into a Kids menu for littlies and a Junior’s menu for bigger ones – I like this approach as it doesn’t assume that all kids eat the same amount whether they’re two or 12 years old. Some kids have smaller/bigger appetites too so it allows you to get the right size portion.

On the day we visited there was a special offer that kids ate free if we ordered a main course each from the main menu. We had intended to try the new lunch menu, but this tempted us away. 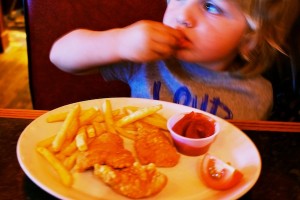 Ordinarily the kids meals are pretty good value though – £3.95 for a main course, dessert and refillable soft drink and £7.55 for the larger Junior’s version.

Arlo had the Chicken Strips with chips – this included a side order of beans, but he could have had salad or vegetables. The chicken breast seemed good quality and Arlo steadily munched his way through most of it.

Sam opted for the Spaghetti Bolognese platter – a bowl of spaghetti bolognese, two slices of garlic ciabatta, a bowl of salad and a half cob of sweetcorn. He wolfed the lot. 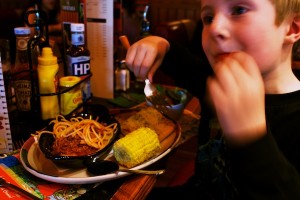 Sam was delighted with his meal

They both had mini ice-cream sundaes for their desserts which also vanished in nanoseconds.

The children’s meals were brought at the same time as our starters, and their desserts ordered as we ate our mains to prevent too much boredom setting in. This was at the suggestion of our host, so they obviously know what they’re doing on the family front.

In terms of table entertainment, both boys were given a fun pack with multicoloured pencil, activity book and board game. This worked fine for Sam but was lost on Arlo.

We often take our own collection of restaurant toys when we eat out – these are usually small containable things like Geomag, travel Connect 4 and that classic – mummy’s phone.

And as a parting shot for Easter, the boys were given a pack of mini eggs each to take away – perfect for our trip to the cinema next door.

It’s not a cheap place to eat, but the portions are American-style HUGE. If you’re smart you’ll opt for the varied lunch menu with 25 different meals at £5.95 a pop or £8.25 for two courses.

A decent venue for a relaxed family meal with a varied menu to suit both children and adults. Make sure you make the most of any offers to prevent the bill getting out of control.

Frankie & Benny’s gave us a voucher to put towards paying for this meal – the staff at the branch we visited were unaware we were reviewers.