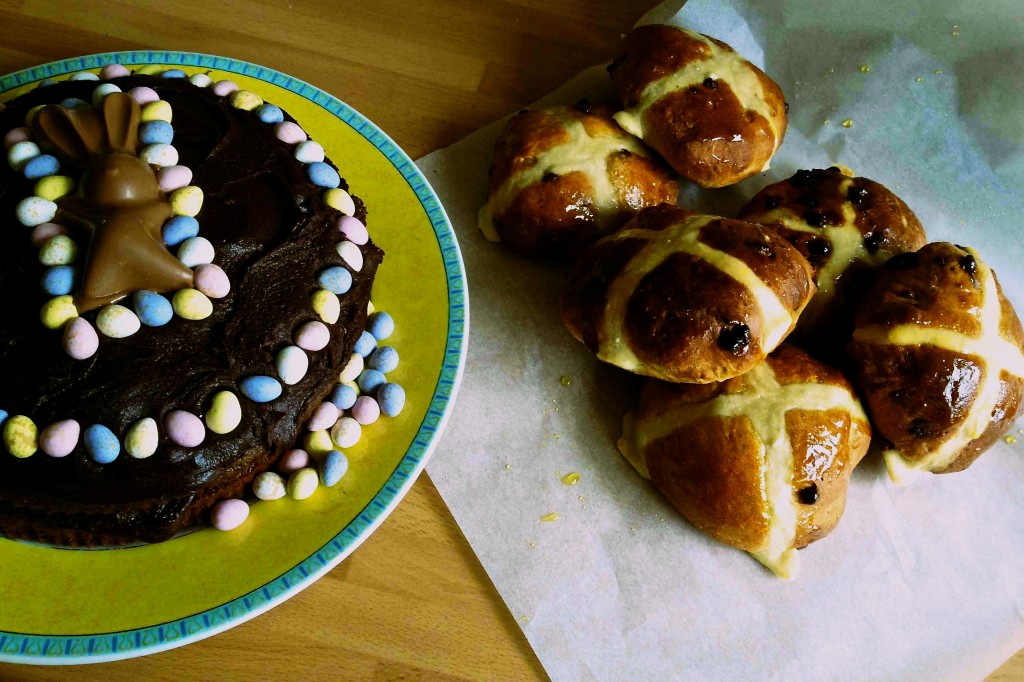 I knocked out my standard chocolate fudge cake blinged up with fabulous miniature mini eggs from Asda along with a maltesers bunny rabbit.

Having leafed through several food magazines featuring a myriad of Easter treats I thought I’d knock up some Hot Cross Buns – i’d never made them before and love a new challenge.

I had intended to make them on Good Friday, the day you’re traditionally meant to eat them, but the day ran away from us after a trip to see The Pirates at the cinema, so I only managed to buy the ingredients. This doesn’t bode well for their longevity after gleaning some fun superstitious facts about hot cross buns from extensive research…

Buns baked or served on Good Friday should be kept for a year as they apparently won’t go off, can cement a friendship, heal a sick person and even protect against shipwreck – who knew the power of a humble bun?!

Sam’s hatred of raisins and dried fruit in general forced me to think differently about what I put in our buns, so I replaced the raisins with chocolate chips, but retained the spice and orange zest so as not to lose their identity altogether.

I lent on Paul Hollywood in Good Food Magazine and Edd Kimber in Waitrose Kitchen for recipe inspiration and technique… so thanks to them both for helping me through my first hot cross bun experience, you were very supportive 😉

I will say that you need to devote an entire morning to making these buns… there’s a lot of rising to be done. It’s worth it though… I really was pretty chuffed with how well they turned out from a look and taste perspective. 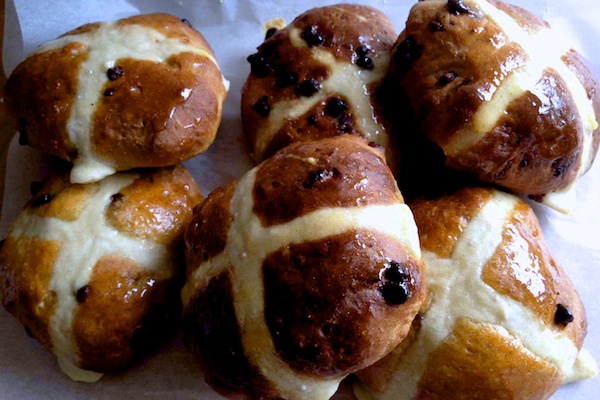 They made the house smell incredible

1. Put the flour, salt, mixed spice, cinnamon, caster sugar and yeast into a large bowl and mix. Make a well in the centre.

2. Heat the milk until it starts to bubble at the edges, then remove from heat and stir in the butter until it melts. Stir in the orange zest and allow to cool for 5 minutes and then crack the egg in to the pan and beat thoroughly.

3. Pour the warm liquid into the well of the dry mixture and stir to form a sticky dough.

4. Lightly dust a work surface with flour and then turn the dough out of your bowl and knead for about five minutes until it’s smooth and stretchy.

5. Transfer the ball of dough into an oiled bowl and cover with oiled cling film – leaving in a warm place to rise for an hour.

6. Flatten the top of the dough a little while still in the bowl and then scatter with the chocolate chips. Fold over and knead – repeating until the chips are distributed throughout the dough. Cover and leave to rise again for a further hour.

7. Turn the dough out onto a lightly floured surface and flatten a little. Divide into 9 equal pieces – about 100g each – and roll into balls. Place on a baking sheet lined with greaseproof paper, cover with oiled cling film and leave for one final hour of rising.

8. Pre-heat the oven to 200C/180C fan/gas 6. In a cup mix the plain flour with a few splashes of water to form a paste for the crosses. Tip the paste into a plastic food bag or disposable piping bag and snip off the end. Pipe crosses across each bun then bake for 20-25 mins until golden.

9. Remove from oven, and as they cool a little heat the golden syrup or jam then brush over the surface of each bun to achieve that lovely glossy glazed look. Leave to cool a bit more and then serve, split and buttered.

This is my entry to this month’s Fresh From The Oven currently hosted by The Little Loaf. It’s a fun baking challenge with a different theme every month. The round up will  be published by Claire at Purely Food.