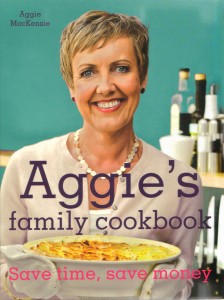 I think most people recognise Aggie MacKenzie as the sensible Scottish one from TV Show How Clean Is Your House. I’ve never seen the racy blonde one Kim in the same way again after she got totally slozzled on Celebrity Come Dine With Me a few years back and completely shamed herself – pure TV gold. Anyway, I digress!

However there’s more to Aggie than wearing white coats and finding bacteria in people’s fridges, she is incredibly experienced in the field of food. Professionally having worked on food magazines and indeed becoming the head of the Good Housekeeping Institute for many years; and as a family cook for over 20 years.

Her latest publication Aggie’s Family Cookbook (Save time, save money) is really a chance for her to publish everything she’s learned in this time and pass it on to us family cooks trying to make our way in the harsh world of feeding our hungry troops on tighter and tighter budgets.

Who is it for?

Busy parents who are perhaps struggling with staying on top of cooking family meals week in, week out, maybe stuck in a rut for ideas and need a bit of guidance. People who don’t have much experience in the kitchen or much love for it would find this book hugely helpful.

There’s a HUGE introduction full of very sensible tips, and a pretty impressive meal planning section which gives you four weeks’ worth of meals using recipes from the book, plus handy weekly shopping lists. If you’re superbusy then things like this can really help.

And of course, Aggie being Aggie, there’s a section on how to clean your kitchen. I found that a tad patronising. Kind of like in Gina Ford’s baby manual where she suggests you use a portion of the day for cleaning windows….

The book seems to be written for Americans as there’s lots of translations in brackets after British words like taps and aubergine (faucet and eggplant) which was a bit weird.

Once you’re past the gigantic intro, you’re into the recipes. Pretty clearly laid out – although the method steps can be a bit long. I prefer them to be short and numbered so I don’t get lost.

I like the tips on each recipe but would like to know if I could freeze each dish, as she doesn’t always mention it.

The chapter headings are a bit vague. Food on the run – has it committed a crime?! Bits and pieces that make life so much better – sounds like an ad for B&Q!

Definitely aimed at the family audience with crowd pleasing recipes that aren’t too off-the-wall. Her eldest son Ewan gets a mention in quite a few of the dishes, so he’s clearly a chip off the old block in the cooking department.

She does mention in the intro that we should be cutting down on meat for health reasons, but there’s no quick reference guide in the index for the vegetarian recipes which I find annoying.

But this is possibly because most of the recipes do revolve around meat, so she’s not really taking her own advice.

There are a handful of meat-free meals to try like vegetable empanadas, veggie curry and the most tempting no-hassle gnocchi with sage and butter.

Most likely to cook

The vegetarian meals (obviously) but also some of the sweet stuff like Scotch Pancakes, Brownies and Trifle. The Onion Bhajis look delicious. I also had a go at making the Pork, Chorizo and Chickpea stew which was a real winner.

Would you buy it for a friend?

Probably not actually – it’s a bit too mumsy. It’s the type of book we should buy as it’s so practical, but it’s just not very sexy or aspirational.

Published in hardback by Pavilion, priced £20

***THIS COMPETITION IS NOW CLOSED, NO MORE ENTRIES PLEASE***

I have two copies of Aggie’s family cookbook to giveaway….

1. For your main chance to win please comment on this post telling me how you save time and money in the kitchen.

4. For a fourth chance to win please go and ‘like’ Feeding Boys on Facebook, and come back to this page to comment you have done so.

This giveaway is open to all readers with a UK mailing address. The winner will be chosen using an online randomiser and announced in a subsequent post.

I am running this competition on behalf of Pavilion who will be responsible for sending the prizes to the winners. Their decision is final and no correspondence will be entered into.

There is one main way to enter and several ways to get bonus entries. You must leave a separate comment for each bonus entry otherwise they will not be counted.

***THIS COMPETITION IS NOW CLOSED, NO MORE ENTRIES PLEASE***