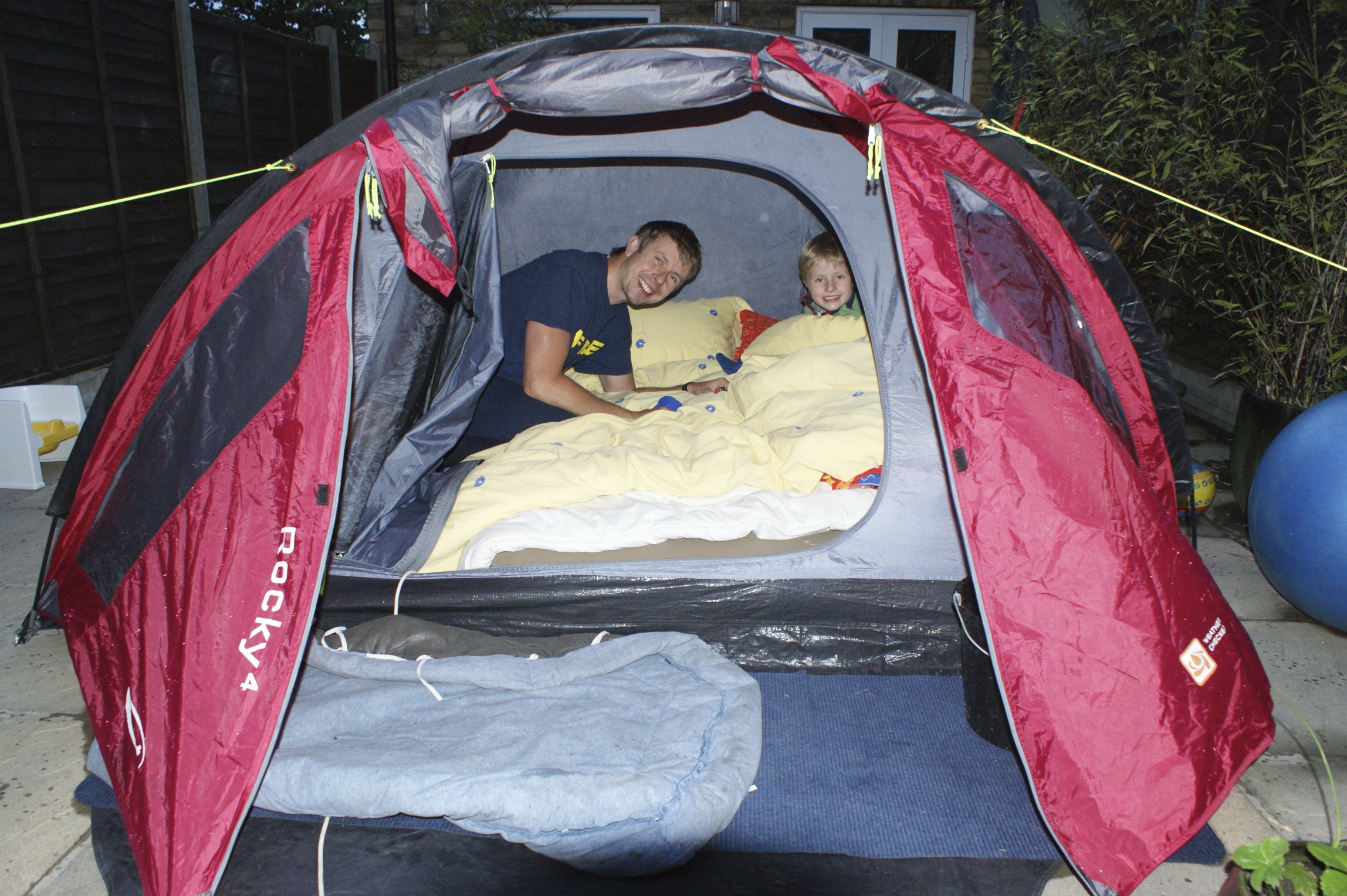 We were meant to be camping at the coast for Father’s Day weekend, but the hideously wet forecast changed all that.

Matthew decided to pitch the tent in the back garden instead – so he and Sam had a ‘guys night’ under canvas. They had a brilliant time!

To celebrate Father’s Day and put the first harvest of fresh beetroot to good use from the allotment I decided to bake brownies. 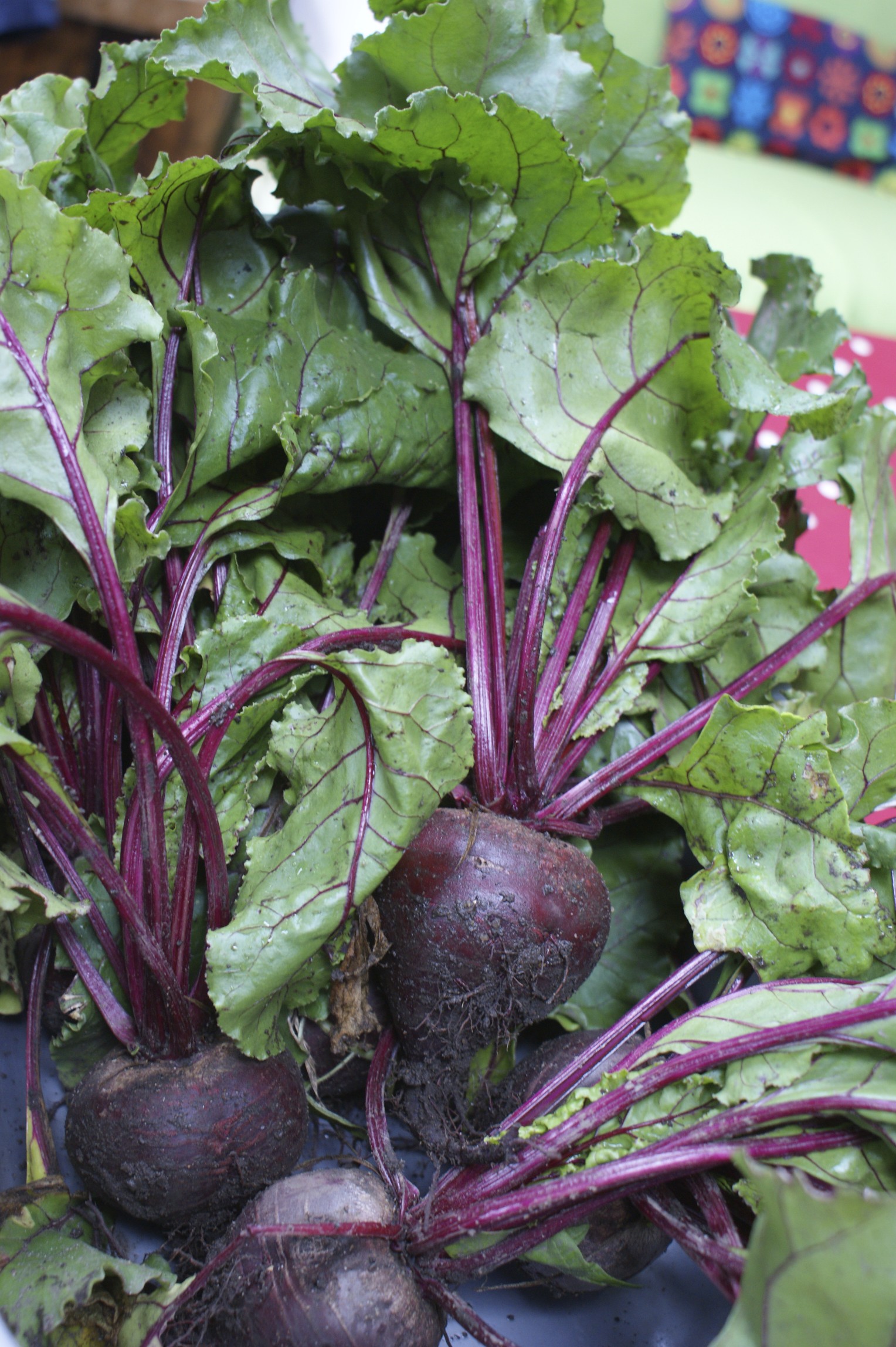 It’s a bit of a mental leap to think about using beetroot with chocolate, but it’s a stroke of genius whoever came up with it! I first had a dabble last year with a huge chocolate beetroot cake, but this time I decided brownies were worth a go.

I found a great recipe on the Good Food website, and stocked up on vinyl gloves to protect my hands from beetroot juice. It’s potent stuff, really really good for you, but boy does it look like you’ve been in a massacre when you’ve been handling it.

The brownies came out a dark reddish brown in colour, and had a very pleasingly light consistency. The beetroot gives them a lovely juicy quality, and also lightens the effect of the chocolate. They’re certainly not sickly sweet and don’t hit heavily in your tum. 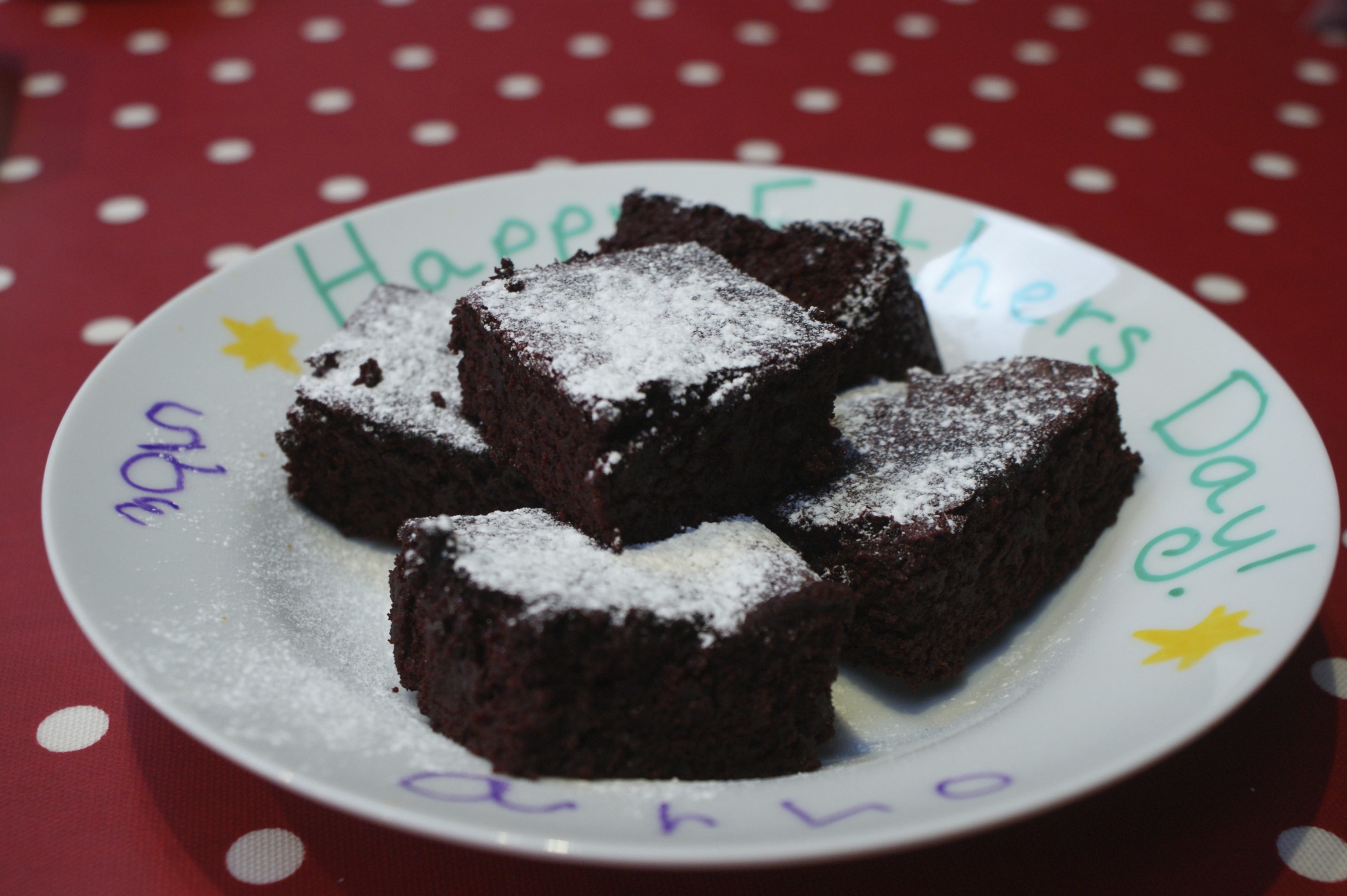 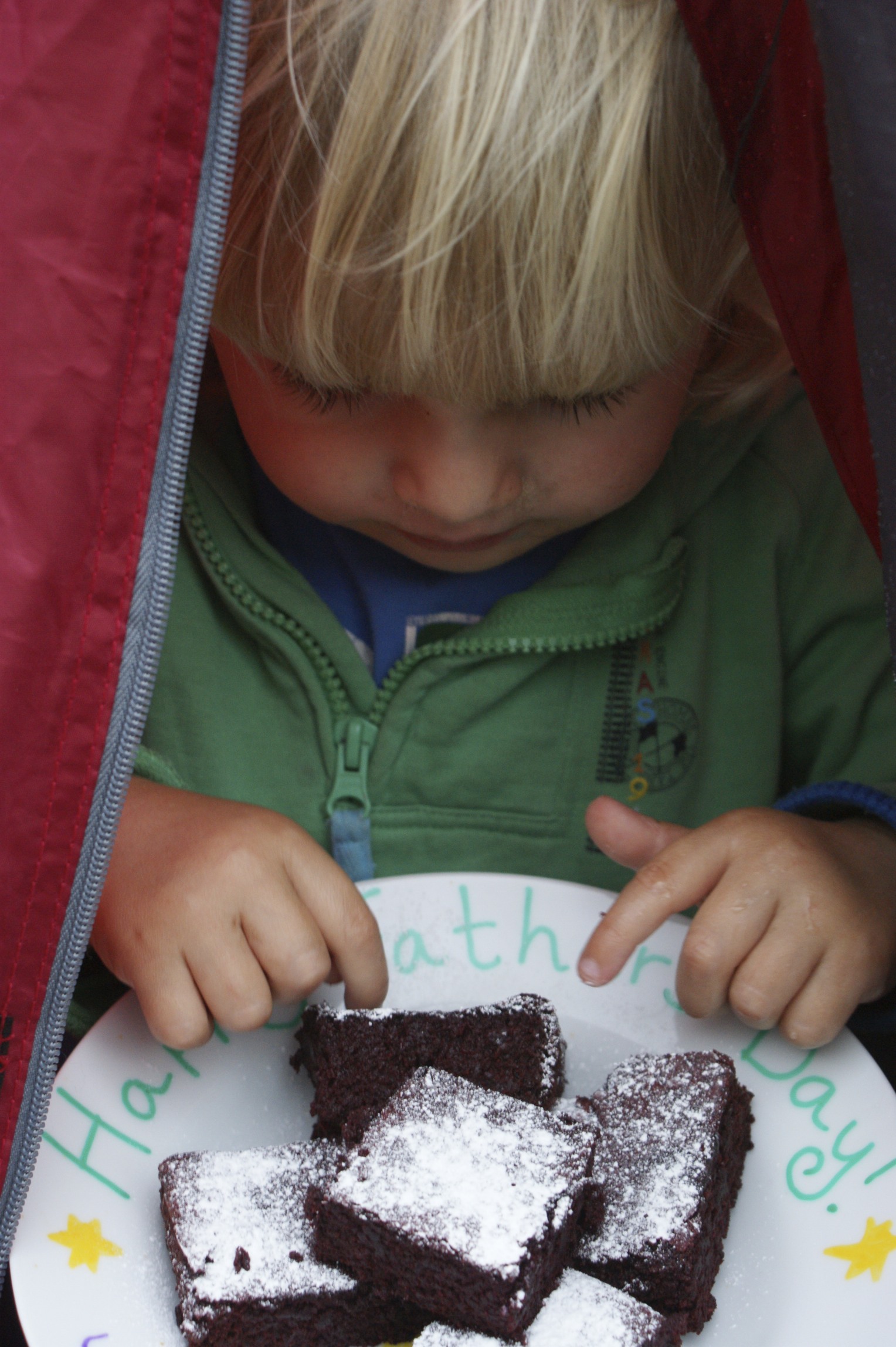 1. Get some protective gloves on to protect your hands from the red beetroot juice, cut off the top and bottom of the beetroot then peel. Roughly chop and then place in large bowl. Add a dash of water, cover with cling film then cook in microwave on full power for about 12 mins until tender.

2. Heat oven to 180’C/160’C Fan/Gas 4. Grease and line a 20 x 30cm tin – traybake or roaster both fine. Take beetroot out of microwave and drain using a sieve. Put back in bowl and add the butter, chocolate and vanilla, and mix until all melted together. Use either a food processor or blender to blitz the mixture until really smooth. I only have a tiny food processor attachment for my hand blender so had to do it in a couple of batches.

3. Beat the sugar and eggs together in a large bowl using an electric whisk until it’s a nice foamy consistency and pale in colour. This should take a couple of minutes. Carefully spoon the beetroot mixture into the bowl and using a metal spoon gently fold it in. Then add the sifted flour and cocoa, again carefully folding the ingredients in to form a smooth brightly coloured batter.

4. Pour mixture into your prepared tin and bake for around 25 mins until it’s risen with a slight wobble under the crust when you shake it. Cool totally in the tin, then cut into squares. Dust with icing sugar for a pretty finish. 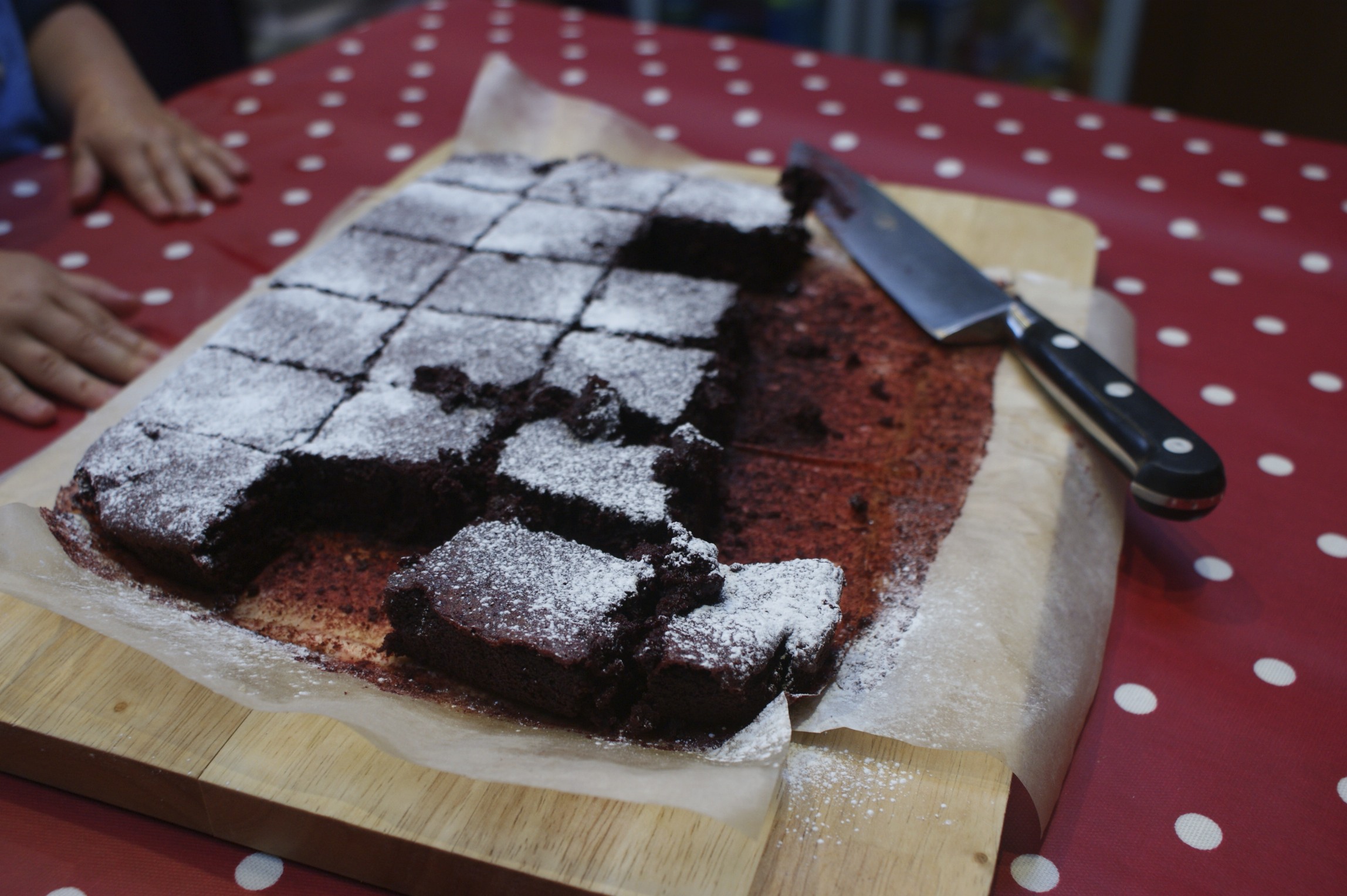 The brownies didn't hang around for long...

We’ve been consuming so much beetroot lately in fact that it’s had a rather alarming side effect when you go to the loo. You have been warned…