I haven’t posted a recipe for a proper meal in what seems like ages, so I’m going to pull my socks up this week and hit with you some family friendly fodder.

I’ve been inspired by May’s copy of BBC Good Food Magazine which has some real winners in it. I love their Make it tonight section of unfussy recipes perfect for a weeknight supper.

I chose the chicken parmigiana because it’s fairly quick to make, there’s a small amount of faff involved but it’s really worth it coz it’s a little blinder!

I bought some plump chicken breasts from the farmers’ market this weekend and the quality and freshness of the meat was noticeably better than supermarket efforts. I paid a fiver for the biggest pair of chicken breasts I’ve seen.

The recipe requires you to cut them in half through the middle and then bash them flat with a rolling pin – arguably one of my favourite stress-relievers in the kitchen. Once flat you coat the meat in beaten egg and then breadcrumbs. You could easily prepare this part of the recipe in advance and then chill until you’re ready to assemble.

The final result was pretty splendid. 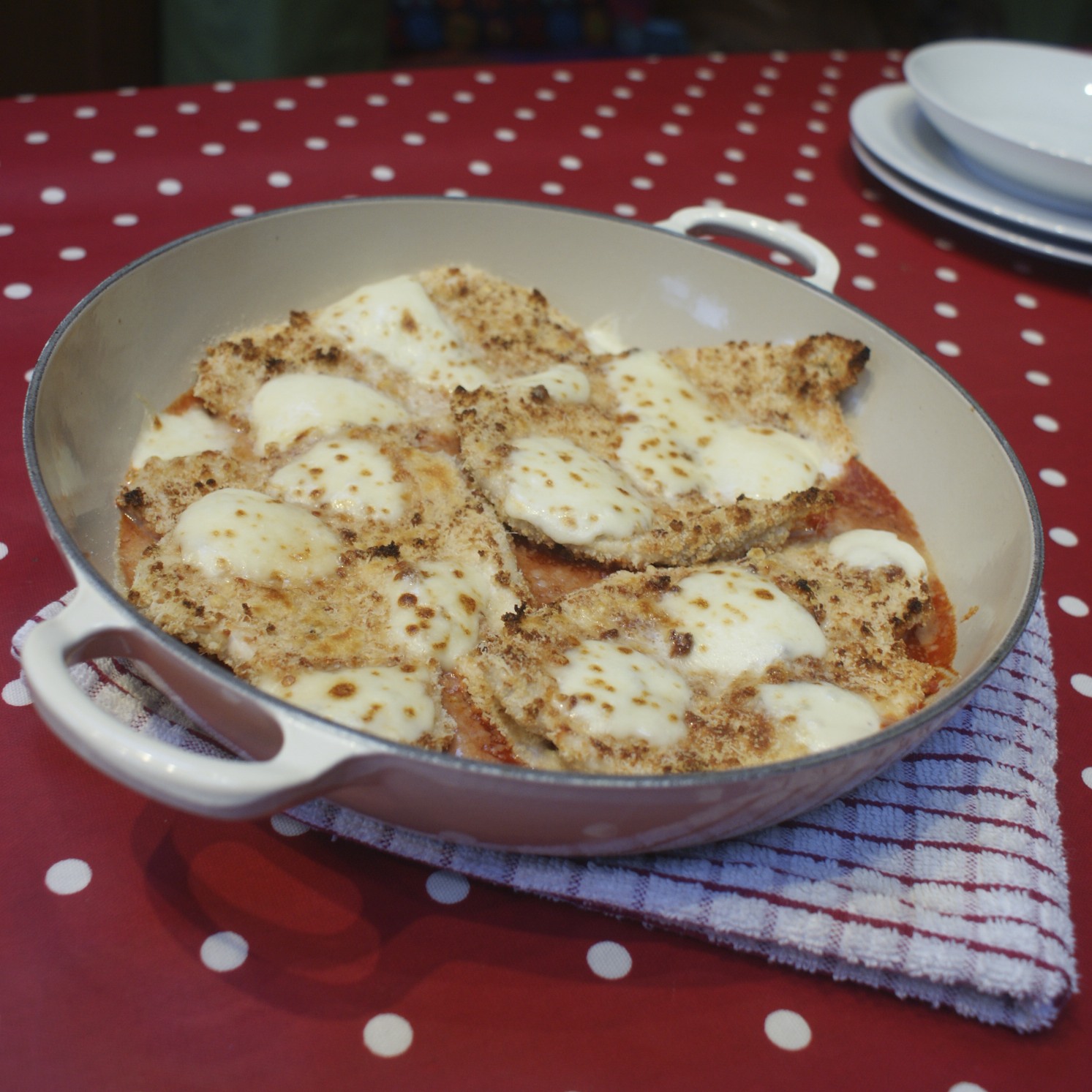 Arlo devoured the meal – as did Matthew and I. The chicken had a very satisfying crunchy coating but the meat remained tender inside. The modest amount of tomato sauce underneath added a zing of freshness that prevented it from being a dry affair. We had it with earthy buttered new potatoes and steamed broccoli.

Sam was out for tea so missed it, but I’m hoping to make delicious sandwiches with the leftovers for lunch tomorrow!

If you were hosting a tea date for littlies, you could adapt the recipe by flattening the chicken and then halving the portions again to make burger-sized bits to stick in a bap. Or even cut into thin strips to make toddler-friendly goujons.

1. Place the chicken breasts in a bag or between two sheets of cling film and then bash as flat as a £1 coin with a rolling pin.

2. Have your beaten egg in one dish, and your breadcrumbs and half your parmesan in mixed together in another, then coat each chicken portion in egg and then the cheesy breadcrumbs. Place on a plate and put in the fridge until needed.

3. Gently heat the oil in a saucepan and cook the crushed garlic for a couple of minutes, then add the passata, sugar and dried herbs. Season to taste and then simmer for 5-10 minutes.

4. Heat grill to medium/high and cook the chicken for 5 mins per side – be careful the breadcrumbs don’t blacken. Once cooked remove and assemble the meal.

5. In a shallow ovenproof dish pour your tomato sauce into the bottom and jiggle the dish to form an even layer. Then place the pieces of chicken on the top. Scatter evenly with the chunks of mozzarella and Parmesan cheese and then grill for 3-4 mins until the cheese is golden and melted and the sauce is bubbling.

Serve with new potatoes and greens.