Feeding my boys and a firefighter is hard graft at times, so to reward myself I’ve decided to write sporadic blog posts that are ultra girly. I need to embrace my inner pink and glittery side every now and again to try and balance the hurly burly testosterone that fills my home!

It’s not that I’m a particularly girly girl, maybe I’ve been watching a bit too much My Big Fat Gypsy Wedding, but whatever it is, I need to let it out!

So without further ado, I’ve had my first go at making one of the girliest sweet delights on earth – macaroons!

My friend Sarah from Maison Cupcake, aka the mistress of macaroons showed me how to make them a few weeks ago. Then watching Lorraine Pascale whip them up on her show, it reminded me to pull my finger out and actually have a try myself.

I used the basic recipe from Ottolenghi The Cookbook and then princessed them up with pink food colouring and rosewater. 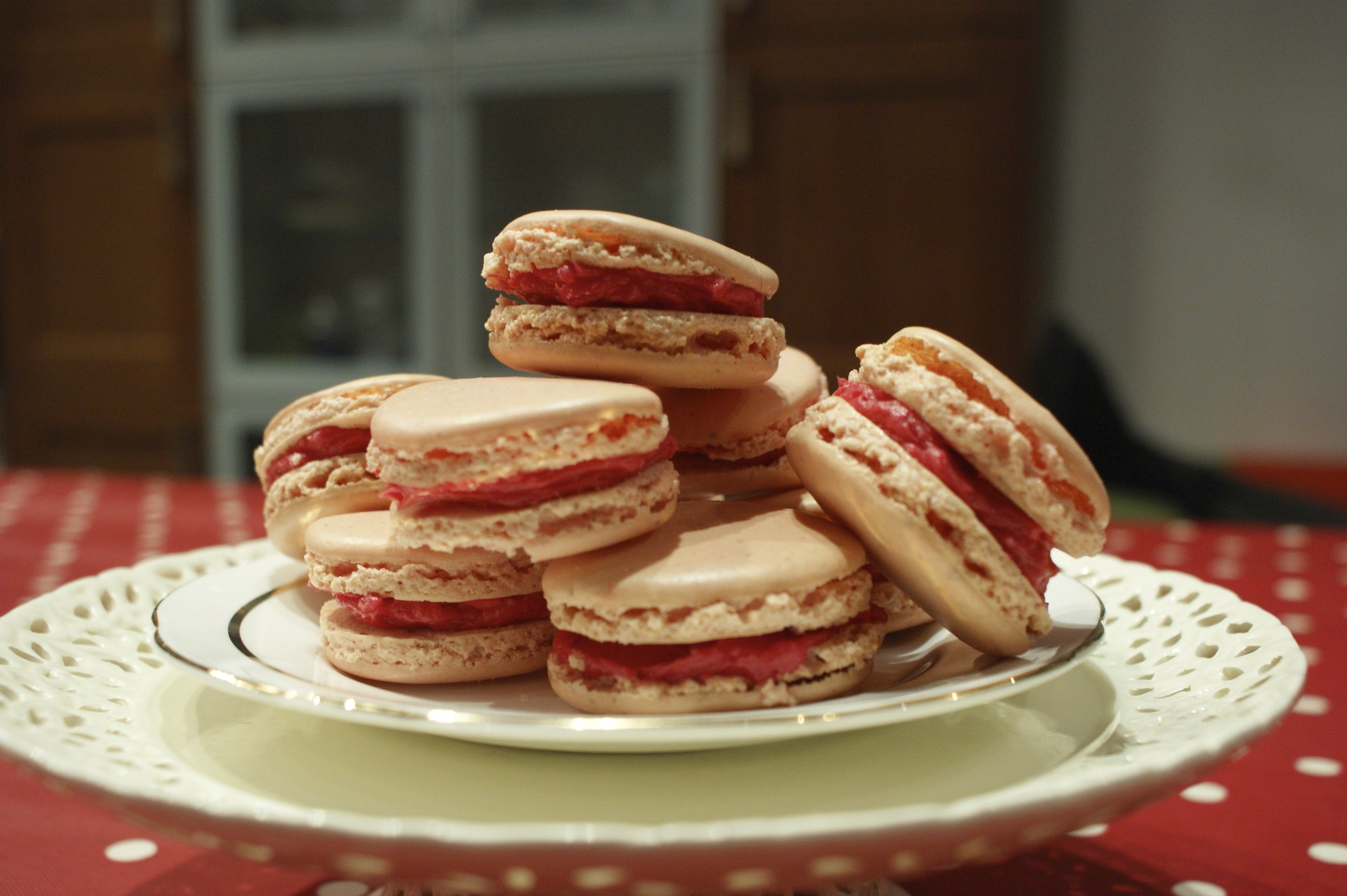 Macaroons fit for a princess

It was a nerve wracking process – Sarah had warned me that sometimes they work and sometimes they don’t. In fact she made them a staggering fifteen times until they finally worked – zoinks!

To start off with I thought mine were a total disaster. They weren’t entirely circular, were a bit on the big side and some got a bit stuck to the greaseproof paper.

However once I’d put them together with the buttercream they actually looked fairly respectable.

Matthew and the boys didn’t like them at all… I’m not sure if it was the colour or the perfumey flavour of the rosewater or probably both! However I thought they were delicious. Crunchy, chewy and delicate. I ate them all myself – oops!

1: Heat the oven to 160’C, 150’C Fan Oven. Blitz the almonds and icing sugar in a food processor to get it to the finest possible consistency.

2: Beat the egg whites and caster sugar on full speed until you achieve a stiff peak consistency. This mean when you lift the beaters out of the white foam a little mountain should rise up and stay proud rather than drooping back down.

3: Sieve the almond and icing sugar mixture on top of your meringue and with a spatula sweep around the outside edge of the mixture and then bring your spatula through the middle up and down 10 times. Add in your food colours and then repeat the spatula round and up and down ritual  5-6 times until the mixture has gradually combined and has a thick consistency that oozes like lava. Fill a disposable piping bag with the mixture – I sat it in a tall glass to do this more easily. Snip the end across at about 1.5cm width.

4: Line a couple of baking sheets with greaseproof paper – get them to stay on by dotting small amounts of the mixture in each corner to act like glue. Then pipe £2 coin sized discs of  your mixture onto the sheet spaced evenly apart. I got about 26 discs out of mine but it could vary. Tap your baking sheets firmly on the work surface a couple of times to even out the mixture and then let them sit out for about 20 minutes or until the surface has formed a slight skin. When you gently touch the mixture will no longer be sticky – if it is then leave it a bit longer.

5: Cook in the oven for 12-18 mins – check frequently to see how they’re doing. They should have formed ‘feet’ which is that crinkly layer at the bottom and the tops should be smooth. Take out of the oven and allow to cool completely. Then very carefully use a large palette knife to sweep underneath each shell and place gently on a cooking rack.

6: To make your filling cream the butter and sugar, then add the rosewater to taste and colouring gradually to achieve your desired shade.

7: Carefully spread a layer of filling on the underside of one shell and gently use another shell to create your pretty sandwich.

They will store in a sealed container for a few days – but I don’t fancy your chances resisting them!

Feeling fired up to perfect my macaroons I decided to try making chocolate ones next. I needed to make a special gift for a few people doing me huge favours this week and as they’re all ladies I knew they would be appreciated for their frivolousness.

I used the same basic recipe for the shells, just adding 12g of cocoa powder. For the filling I decided to use the quick and simple fudge icing from my express chocolate fudge cake. 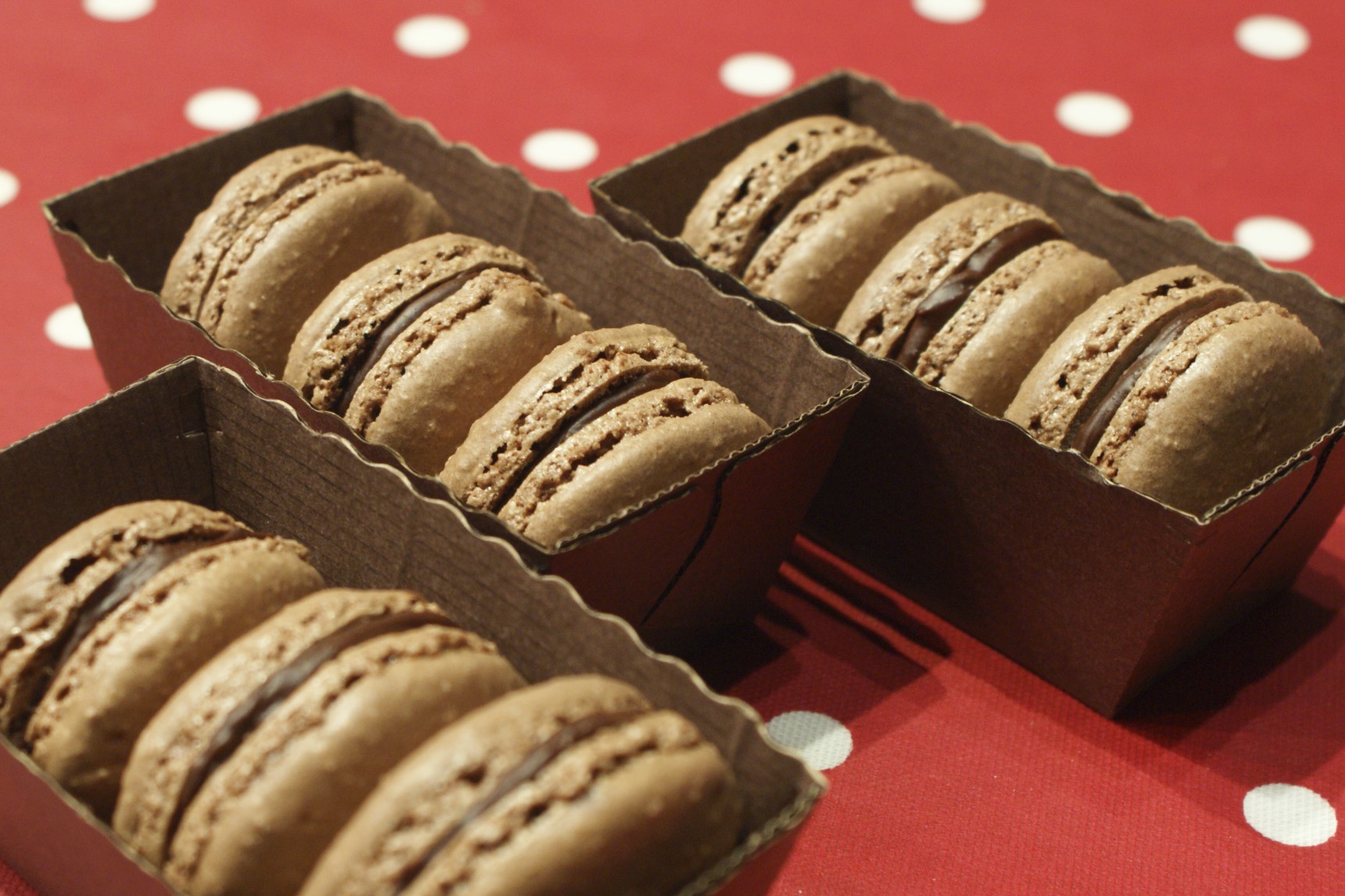 I cooked them for about 14 minutes – some were ready and some were still a bit sticky underneath. Next time I think I’ll leave them for about 15-16 minutes. It’s a tricky balance because you want them to be dry on the bottom but still squidgy in the middle.

The fudge icing made a great filling – easy to spread and a lovely rich dark colour to contrast with the paler shell.

It took ages to find the right packaging for my little chocolate beauties. I had a go at covering an old smoothie box with wrapping paper but it looked like something the dog had got hold of. After an extensive rummage in my baking cupboard I came up trumps with these miniature loaf cases from Sainsburys.

Then Matthew suggested wrapping them in greaseproof paper and I found some gold twine left from Christmas, and the little parcels ended up looking pretty classy.

I never thought i’d be able to make something like macaroons so I’m really proud of my efforts. I feel inspired to experiment with colours and flavours so do let me know of any cool combinations you may have tried! 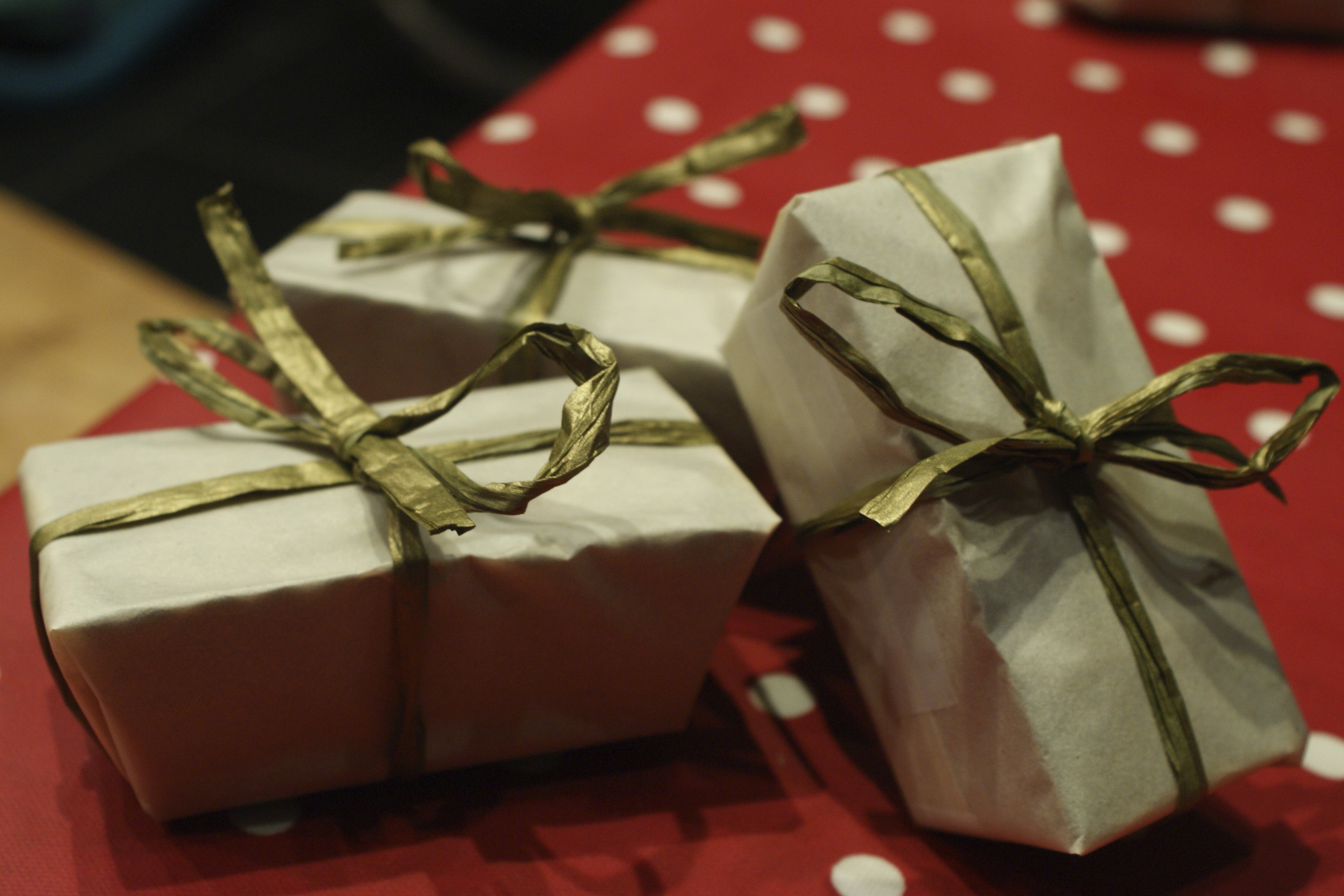