I bought new pans at the weekend, a VERY exciting moment for a kitchen geek such as myself. Matthew was in a rare ‘let’s spend some money’ mood, so I capitalised on it and made a dash for the kitchen department in John Lewis.

I somehow managed to lose Matthew and the kids as I went into a kind of trance looking at all the pots and pans. After a lot of browsing I decided on a Raymond Blanc skillet and a heavenly and much longed for Le Creuset shallow buffet. I think an hour had probably passed at this point and Matthew reappeared with the boys with a crazed expression on his face. Shopping with our boys is rarely a pleasure! 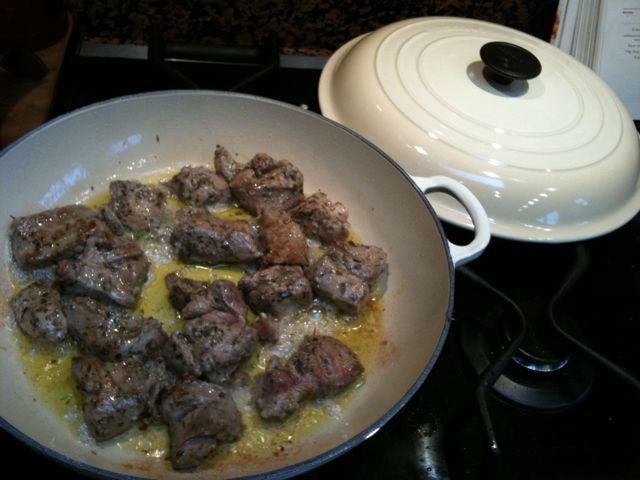 Browning the meet in my lush new pan

Anyway I got my new babies safely home and ready for action. I decided to christen my Le C with a hearty winter stew. Only trouble was I’d neglected to read the part of the recipe that said “marinate the meat for at least 8 hours in advance” – great! I think recipe writers should put information like this in BIG BOLD LETTERS so that busy mums like me don’t miss it!

Anyway when I finally got around to making the stew, my new pan behaved impeccably and was hugely pleasing to use. The stew makes enough to feed 8-10 people so it did well to contain it all.

The meal was inspired by a great recipe book that my mum gave me for Christmas by those clever people at Good Housekeeping called Family Meals For A Fiver – it’s bursting with fab budget meals and ideas of what to do with leftovers. Right up my alley. 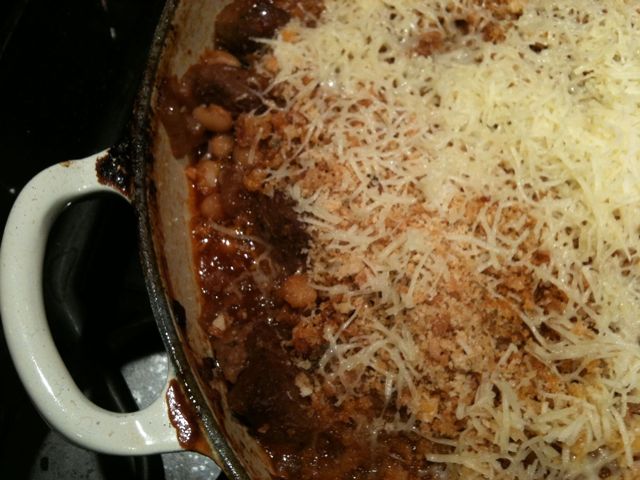 I used their Winter Hotpot as inspiration for my Cowboy Stew – so named because of its reminiscence of a dish my university boyfriend’s dad used to cook of the same name. It’s one of those meals I’ve never forgotten and until now have never managed to recreate. This is as close as it gets and is UTTERLY delicious – crispy chewy topping with juicy meat that falls apart and melts in your mouth. Cowboy Stew is also a cool name to tempt boys into eating it!

This is not an express-cook dish, it’s something that requires some preparation, but once you’ve got that out of the way it’s pretty low maintenance. It’s a crowd-pleaser and perfect for feeding a mob of burly men.

It’s also pretty cheap to make too – I used three packets of Sainsbury’s basics casserole pork at £2 each. It makes LOADS, so we had one meal out of it, Matthew took a wedge into work for lunch the next day, plus we’ve still got a huge portion in the freezer that will feed us all again. It’s the meal that keeps on giving!

1. Get a large bowl and put in the garlic, 2 tbsps of the oil, vinegar, sugar, 3 tsps of the oregano and all of the thyme, salt and pepper and combine with the cubed pork. Cover well with cling film (it has a VERY strong smell that will invade your fridge) LEAVE TO MARINATE IN YOUR FRIDGE FOR AT LEAST 8 HOURS don’t be tempted to skip this step because the marinade with break down the tough structure of this cut of pork and give it a wonderful flavour

2. Pre-heat your oven to 180′ C. Heat 2 tbsps olive oil in a large flameproof casserole and brown the pork in batches and put to one side. Reserve the marinade juices.

3. Add the rest of the oil and cook the onions for around 10 minutes until they are soft. They should absorb the colour and goodness from the pan and caramelise nicely. At this point throw in the sun-dried tomato paste and stir for a minute.

4. Put the pork back into the pan along with the stock, tinned tomatoes, drained bean juice, marinade juices and bay leaves. Give it a good stir to thoroughly combine, and then bring to boil. Cover and cook in the oven for at least 2 hours, 3 if you’ve got time. Stir the beans into the stew 20 minutes before the end.

5. Turn your oven up to 200’C. Move your casserole dish down and melt the butter on a baking tray or roasting tin on the top shelf. Add the breadcrumbs, remaining oregano and seasoning until coated in the melted butter. Return to the oven for 5-10 minutes until golden, keeping a close eye on it so it doesn’t burn!

6. Get it all out of the oven, sprinkle your stew with the golden herbed breadcrumbs and grated gruyere cheese. Plonk it in the middle of the table with a big loaf of crusty bread and let your troops get stuck in!