So it’s off with the mummy shackles for a week and time to don my Leiths apron and rattle those pots and pans on the Advanced Holiday Course. Over the next five days I’ll share some snapshots of what I get up to, useful tips that I’m picking up and where possible some sneaky pictures of the grub.

I did the intermediate holiday course two summers ago and loved it so much that when my buddy Jonny signed up for the advanced week, I couldn’t let him go it alone.

The day didn’t start well – it took a toe-curling one hour and 45 minutes to crawl from Ealing to Shepherds Bush in my car. This is a four mile journey. So I was a little flustered to say the least when I rocked up at Leiths. Luckily Jonny had saved me a seat and we were on demonstrations all morning – so I had the chance to regain my composure before we were let loose in the kitchens. 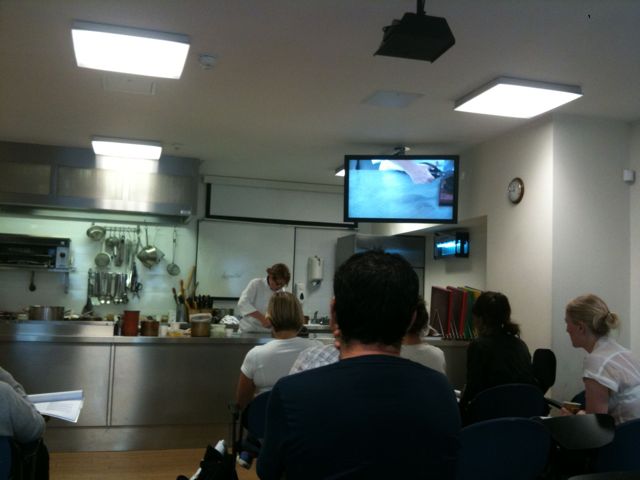 It was a meaty morning. Our teacher Sue rattled through an impressive five dishes as we looked on in awe as she deftly de-boned a chicken, brewed a lamb jus and roasted a duck while telling amusing anecdotes and teaching us valuable kitchen alchemy.

The wild mushroom Ballotine of chicken was absolutely beautiful – served with a super-rich jus. The chicken was totally deboned, left with only breast meat, stuffed and then wrapped in a J cloth – yes really. 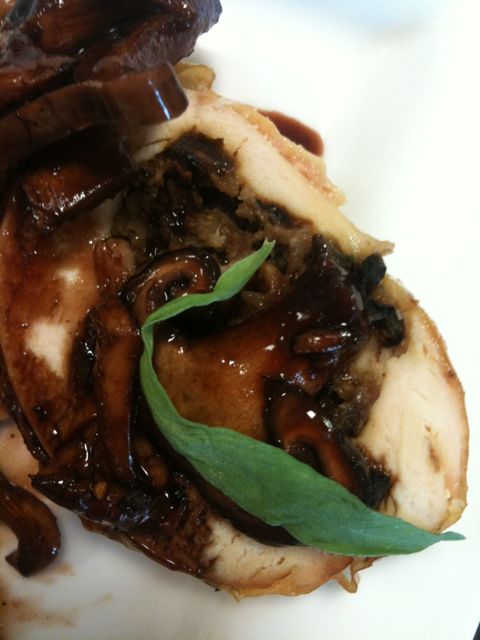 The Leiths Roast Duckling was beautifully tender and served up with a gastrique sauce – caramel/orange flavours. Sue also knocked together some boulangere potatoes as a side dish, which are divine. Like Dauphinoise potatoes, but cooked with chicken stock and butter instead of cream and milk. Very, very tasty. 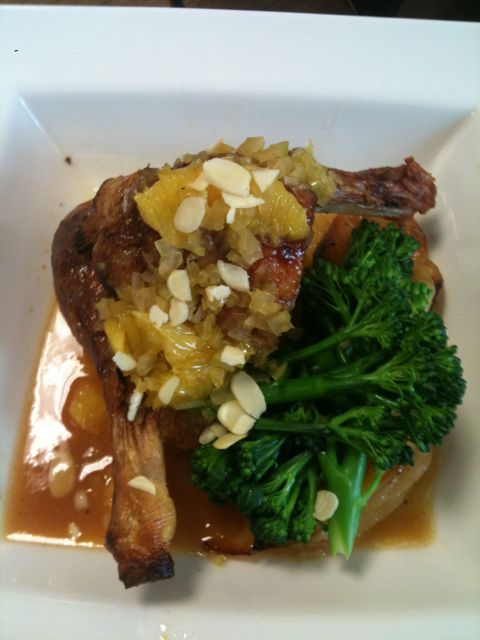 I didn’t get any pictures of the Thyme Wrapped Lamb, but we watched Sue skillfully remove the fillet from the chine and wrack. She roasted the bones for the jus to give it that extra meaty flavour. The fillet was coated in chopped thyme and then wrapped in a flattened layer of streaky bacon. The finished dish was served with puy lentils with pancetta which was a great accompaniment. I never think to use lentils and this reminded me to think again. I reckon the boys might like them actually.

The final dish for demonstration was Chicken Liver and Foig Gras parfait. Not to everyone’s taste, but good to see how it’s done. It was much lighter than a pate and a small amount is lovely with redcurrant jelly. 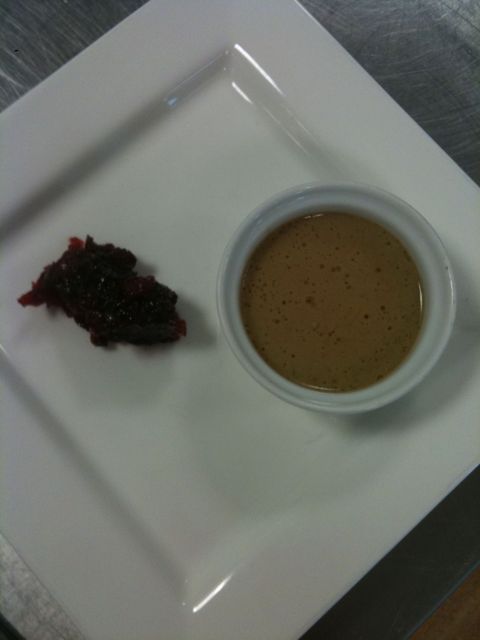 Here’s a quick round-up of some of the useful tips I picked up from the Demonstration session:

The afternoon session was in the kitchen and we got to put some of the stuff that Sue had taught us in Demonstration.

We prepped the lamb and started the jus – straightforward. We’ll be finishing this off on Tuesday.

We de-boned the tiniest quails you’ve seen in your life – NOT straightforward. Very fiddly and Jonny and I agreed at this point that we probably wouldn’t be trying to re-create the experience at home. The marinade however was gorgeous and allowed me to try the much-hyped pomegranate molasses. It’s fruity sticky sweetness is stunning and it makes a great marinade and dressing.

We prepared a lovely salad to accompany the teeny tiny birds (we spatchcocked and grilled them, even though frankly I thought they’d been through enough trauma being de-boned) which consisted of watercress, feta, toasted pine nuts, pomegranate seeds and oregano leaves. I’m saving it for my tea tomorrow night, so will post a picture of it later.

It was a full-on day taking in a whirlwind amount of cooking – but a great start and got me fired up for Tuesday’s session. It’s really refreshing having hours in the kitchen to put new skills into practice without the boys snapping at my heels for their tea.