Sometimes you just need fixing up. And when your best friend lives in another country this isn’t always easy.

After three broken nights in a row with a teething baby and a clingy four year old, my local German friend came to the rescue and revived me with home-made baked cheesecake and fresh coffee.

She is a total legend. 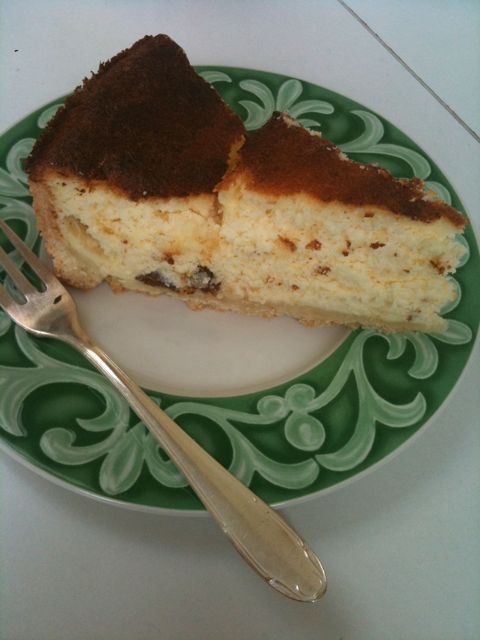 I love how Germans take their cake so damned seriously. They respect and revere it.

As you can see from the pic my friend served it up on lovely plates with cake forks.

She used the mysterious Quark as the basis of the recipe. I haven’t used that since I was locked into the slightly bizarre recipe vault that is slimming world.

It was a world where toffee mullerlite yoghurt and weetabix were considered a decent stand-in for bannoffee pie. Ahem.

This cheesecake was a long way from those days though and brought a great deal of comfort to my sleep addled state.

Fluffy and light but with comforting warm flavours. I’ve even persuaded her to part with the recipe:

Whizz all together in kenwood, kitchenaid or other wonderhelper (or knead it). Refrigerate for 30 mins.

Line a 26cm springform with the dough – quite high up on the sides – and bake it for 8 mins in preheated oven at 180C.

In the meantime prepare the cheese filling:

4 eggs – separated
150g sugar
500g quark
Zest of 1 lemon and juice of half a lemon
200ml whipping cream
200ml milk
1 ½ packets of Vanillepudding (polish shops, but don’t know the polish name for it) – guess you could replace it with starch and vanilla essence, but have never tried.

Beat the yolks with the sugar until creamy and light yellow. Add the quark and lemon, slowly add cream and milk. Then stir in Puddingpulver.

Beat egg whites until stiff and fold in.

Pour the filling in the pastry and bake for about 45-60 mins at 160C. The filling shouldn’t wobble too much any more. Cover with foil if it gets too dark.

Yes there are some women who know how to soothe you, and some who have the opposite effect.

Trying to feel my way around the mums’ scene where I live can sometimes be an uncomfortable experience.

So thank goodness for the kindred spirits with cake and a down-to-earth approach.

As my best friend in Brussells counselled me down the phone later that day after I’d been snubbed by another mum, you have to hold onto the people that DO get it.

Thanks Regine and Jen.

« I love a bit of thigh
Bake it! My entry for July’s baking club »