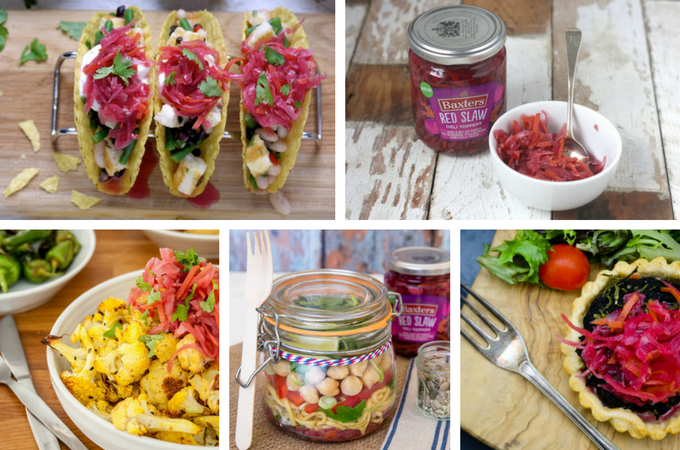 I’ve absolutely loved coming up with recipe ideas using the new Deli Toppers range from Baxters for their #GetTopping campaign. So in my final post I’ve chosen my favourite of the jars, the super-zingy Red Slaw and put together my top 10 list of hacks, recipes and tips to make the most of it!

Elevate a jacket potato by scooping out the flesh once it’s cooked, mixing with grated mature cheddar, some spring onions, a bit of butter and some grain mustard. Pop the mixture back into the potato skins, sprinkle with cheese and then flash under the grill until golden and bubbling. Top with a generous amount of Red Slaw and serve.

Jac from Tinned Tomatoes made these lush looking Vegan Mushroom Tarts with Pickled Slaw. I reckon they’d be perfect for a packed lunch for my vegetarian husband. 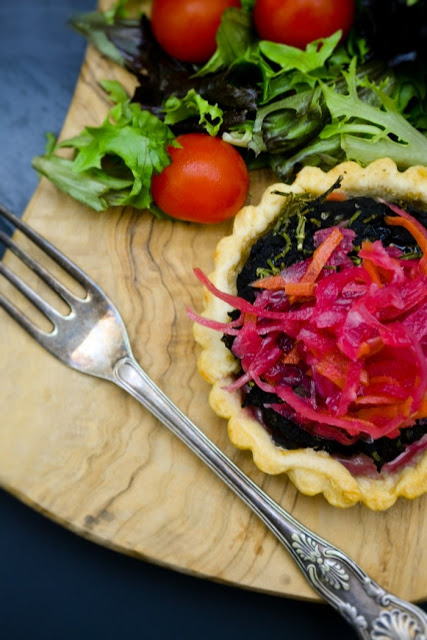 Shred leftover chicken from the Sunday Roast, mix a little light creme fraiche and the zest of a lemon, then stuff into toasted wholemeal pitta breads with a good spoonful of Red Slaw.

Perk up your cheese toasties with a hit of flavour by serving up with a scoop of Red Slaw on the side.

You might remember my Halloumi and Three Bean Tacos with Red Slaw that I kicked the campaign off with here on my blog. A vivid, bold and fun teatime treat that will quite possibly dribble down your chin as you eat it, but in my mind that makes it a more enjoyable meal. 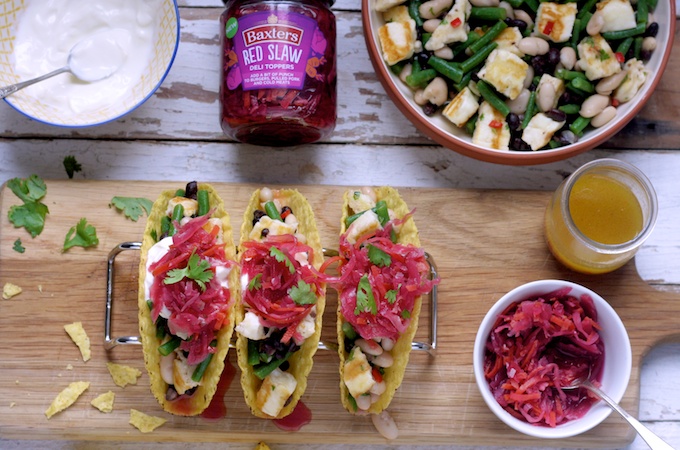 Lighten up you lunch by substituting calorie-laden creamy coleslaw with Red Slaw. Toss it through your salad leaves and chuck in some cubes of feta cheese and a scattering of seeds.

Sarah from Maison Cupcake put together Spicy Roasted Cauliflower Florets with Red Slaw, a classy combo. If you’ve not tried roasting cauliflower yet, then you really need to put it on your list – it’s far nicer than the boiled stuff! 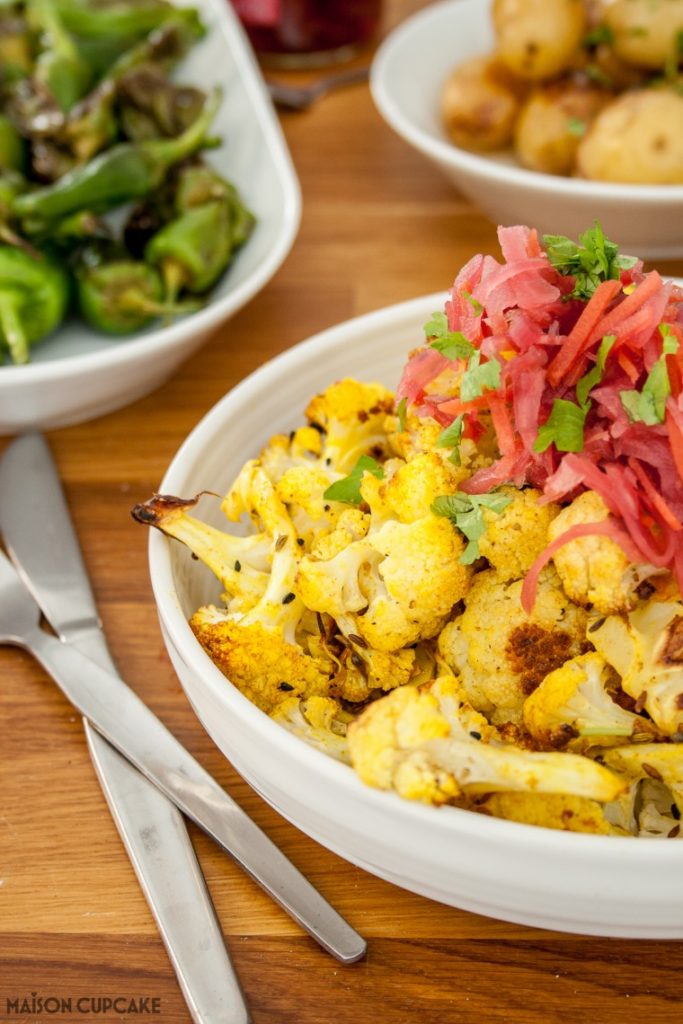 Get fruity and turn the red slaw out into a bowl, grate an apple and toss it through with a handful of sultanas. Delicious served with freshly baked sausage rolls!

Max out your burger with a layer of red slaw – it’s particularly delicious with a cheeky slice of Swiss Cheese.

This Noodle Packed Lunch Salad in a jar from Helen at Fuss Free Flavours looks super cute and would make all your colleagues wildly jealous if you took it into work for a desk lunch! 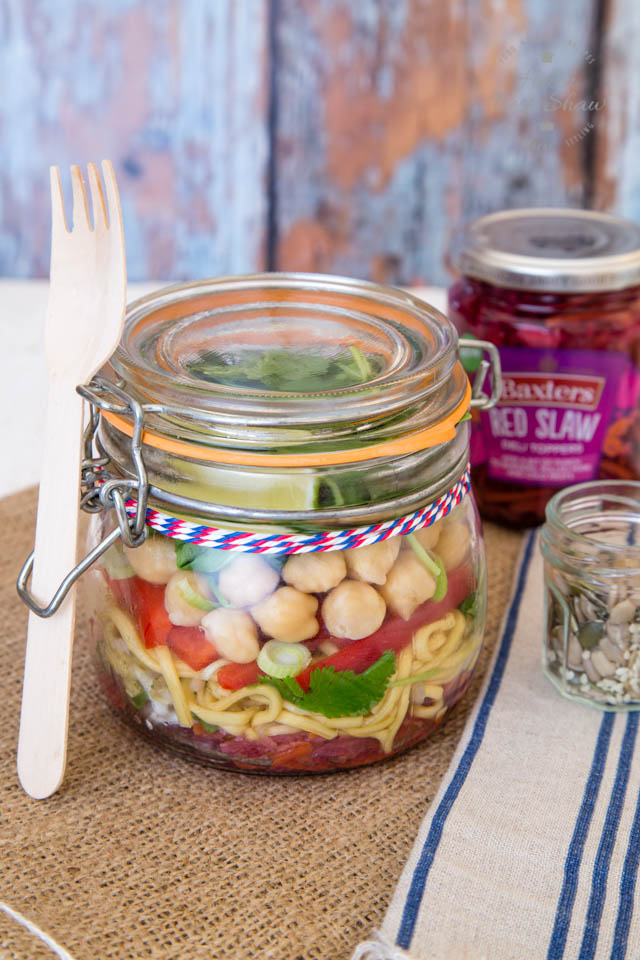 Which of these ideas do you think you’ll try? Have I missed anything? What would you do with a jar of red slaw? Let me know in the comments below!

Other items in the Deli Toppers range from Baxters include red onions, spicy slaw and jalapeños. RRP is £1.49 from the major supermarkets. Check out delitoppers.com and follow the conversation on Social Media with #GetTopping. You can also win a jar so you can try them for yourself! Click here to find out more 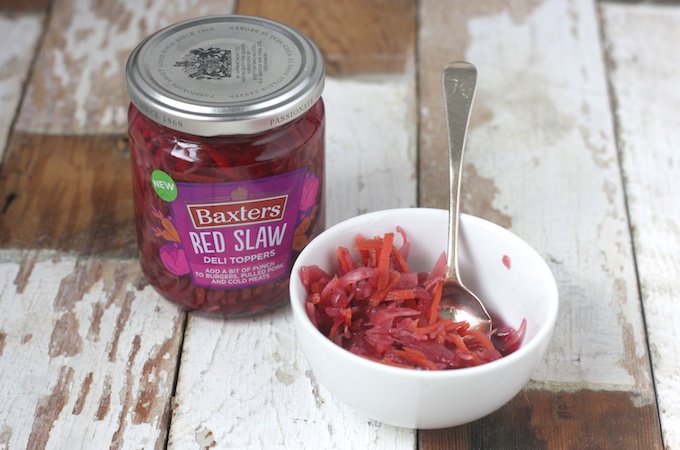 Disclosure: I have been commissioned by Baxters to create and share this post with you. All views are my own.