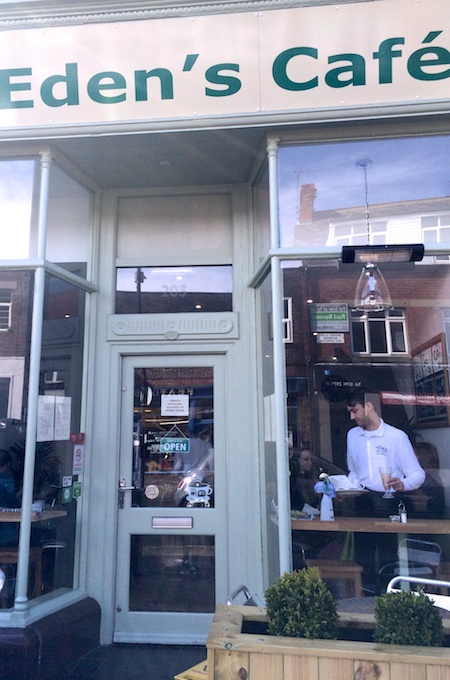 We ducked into Eden’s Cafe on Park View in Whitley Bay on the way back from Arlo’s swimming lesson to escape the sleet and snow that was chucking itself sideways at us. Ah the joys of the North Eastern climate!

Formerly Sugarloaf, the home of the legendary pancake challenge, I was curious about it’s new incarnation so this was the perfect excuse for a nose around.

Arlo immediately spotted the pancake stack on the Kids Menu and wasted no time ordering it his way – chocolate chips, maple syrup and vanilla ice cream. All items on the little people’s menu are £3.95, which is pretty good value with a free glass of squash, but naturally Arlo opted for a far more elaborate chocolate milkshake – kaboom! 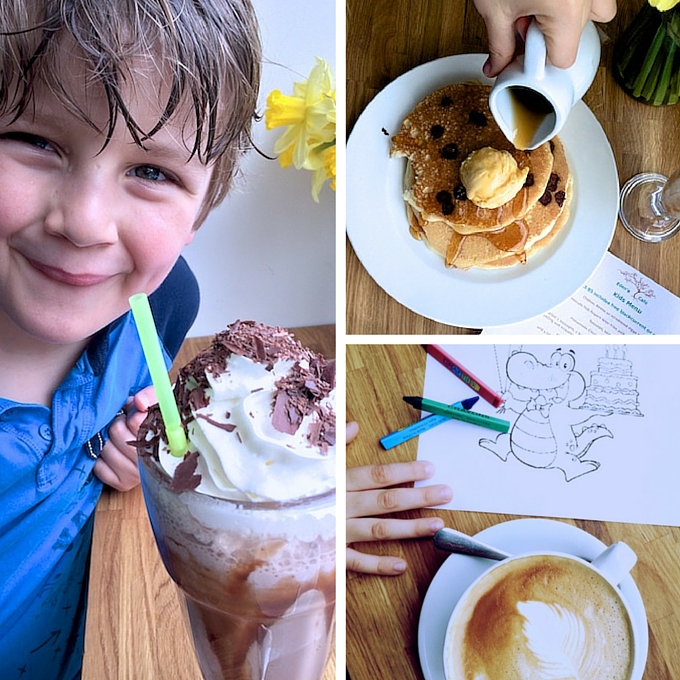 There are no flat whites on the coffee menu, but I got an expertly crafted double shot latte that looked and tasted very much like a flat white, so I was happy with that.

If you’re a hot chocolate connoisseur then this is definitely the place to come – the menu boasts a staggering 16 different varieties! Nougat, peanut butter, peppermint, white chocolate amaretto… i’ll be taking the boys for an after school treat very soon!

Aside from the pancakes, the food menu offers a mixture of indulgent breakfasts like eggs benedict, every kind of sandwich, as well as more filling fayre like pasta and burgers. There’s an enticing cabinet of fresh cakes for the afternoon tea crowd and there’s even prosecco if you’re feeling really decadent.

Arlo’s generous portion of three giant American-style chocolate chip pancakes were fluffy and light, served up with two scoops of vanilla ice cream and a jug of maple syrup. He valiantly ate his way through two and a half out of three of them. 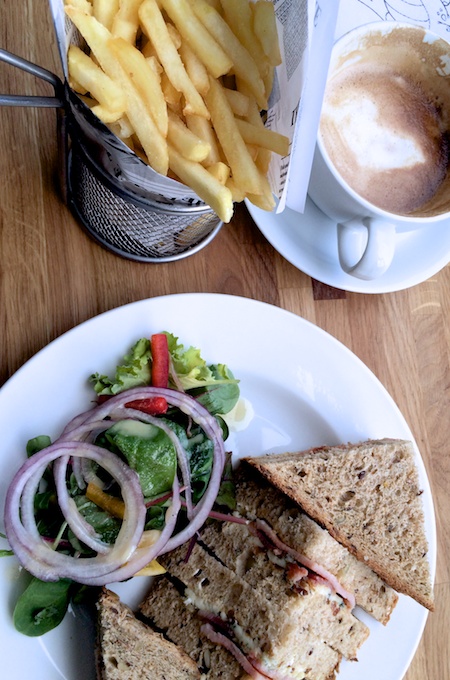 I opted for a Bacon and Stilton sandwich on seeded bread with a side order of skinny fries to share with Arlo. The bread was soft and malty with just the right amount of bacon and tangy cheese. The fries were a total indulgence – perfectly crisp and disappeared in minutes.

Crayons and some fun colouring in, an accessible and affordable kids menu and high chairs for little ones. Thumbs up from Arlo.

The staff were friendly and approachable, we got table service and despite it being busy were served rapidly.

Family friendly and the perfect place for a spot of weekend indulgence, Eden’s Cafe fits in nicely to the independent shopping and cafe scene on Park View in Whitley Bay. I can see this being our go-to local cafe spot when we’re in the mood for a treat!

Disclosure: I visited Eden’s Cafe on a whim and paid for my own meal. All views and images in the review belong to me.