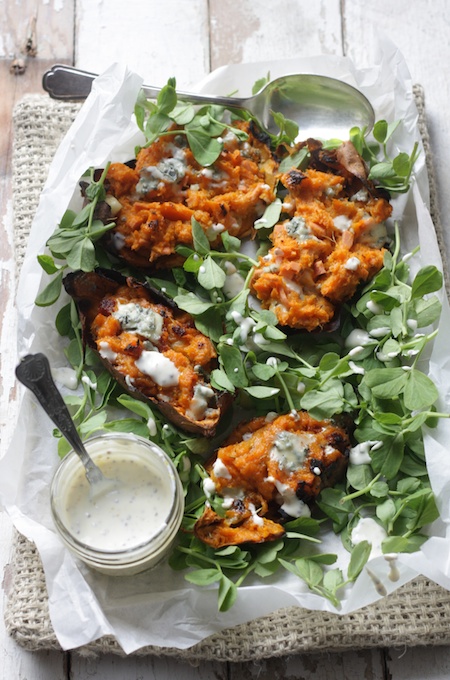 Baked sweet potatoes with their flesh scooped out and mixed with blue cheese and smokey chorizo, scattered with even more blue cheese then grilled and served with a big leafy green salad – totes amaze.

I’ve been using up some annual leave before the end of the year and this is what I rustled up for lunch after dreaming about it while on my commute into work a few days before. I literally couldn’t wait to get back into my kitchen and start creating things again.  A lot of people are asking me how i’m managing to keep up with my blog and a full-time job. Well the answer is it’s not easy but when you’re passionate about something you make it happen. Shame I can’t be as passionate about doing the ironing or going jogging, but hey, maybe one day.

This recipe is a brilliant lunch when you’ve got people coming over as it looks really pretty and tastes sublime. Sweet potato goes so perfectly with blue cheese, chorizo and rosemary; just bags and bags of flavour. You could also use bacon instead of chorizo, or for the veggies try using a few strips of quorn bacon or roasted red peppers – the spicy sort.

The dressing is thick and creamy and full of tang which finishes off this dish perfectly.