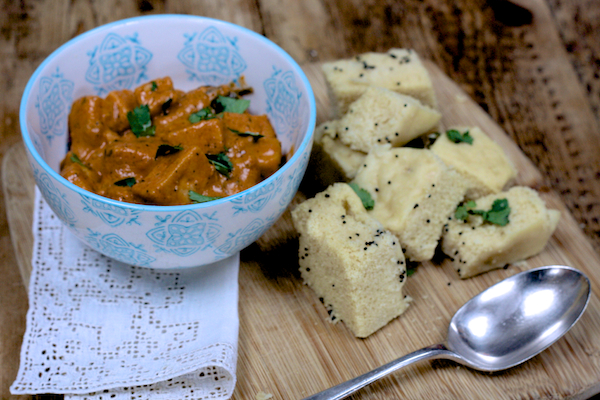 Matthew and I tasted the BEST vegetarian curry we’d ever had at our neighbours’ pot luck party back in December. It was brought along by a colleague of Nisia’s called Zeenat who was really modest about her cooking, but I was determined to get the recipe out of her so we could recreate the experience at home.

The intensely flavoured sauce is warmly spiced and creamy, concealing little chunks of paneer cheese that you could easily mistake for tofu until one pops in your mouth and the flavour of mild cream cheese makes for a pleasant contrast. It’s not a super sweet curry like a korma or passanda, so doesn’t leave you feeling bloated.

Instead of rice it’s incredible served with squares of Khaman Dhokla, which is like corn bread in texture, kind of cakey and made from chickpea flour. On its own it’s quite claggy, but once dunked in the divine Makhani sauce, it’s a pretty special experience.

So I was hugely excited when my neighbour Nisia said that Zeenat had offered to come over to show us first hand how to make the Gujurati dish. 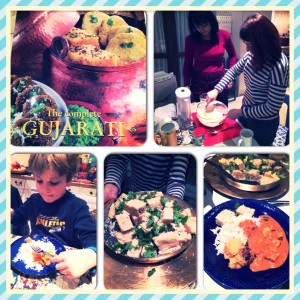 So on a chilly afternoon while the boys ran riot around the house, Zeenat took us through step by step how to make her family’s version of Paneer Makhani with Khaman Dhokla. I snapped away with my iPhone and scribbled down notes, so I hope i’m doing Zeenat’s recipe justice. You’ll have to try it and let me know how it works out! 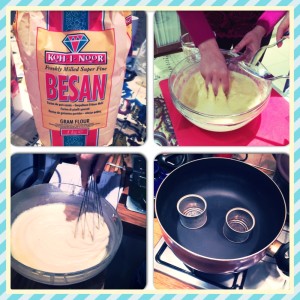 Khaman Dhokla isn’t a bread that you bake, but instead you steam it. Zeenat has perfected this art by finding a very wide pan which she fills the base of with water, and in it sits a couple of half size tins which she also fills with water. You then sit the thali tray on top of these tins, place the lid on top and allow the Dhokla to gently steam until it’s cooked.

It uses a mixture of fruit salt, bicarbonate of soda and citric acid to thicken and rise. It’s amazing the difference it makes to the batter once you’ve added these ingredients. The contents of the bowl doubled and bubbled! 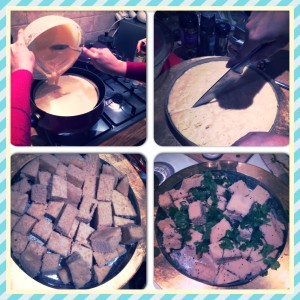 1. Prepare a large lidded pan to act as the steamer for the thali tray. Fill to about 2 inches deep with water and sit 2 empty half size baked bean tins filled with water. Your thali tray will sit on top so make sure it all fits with the lid on.

2. Put the flour, sugar and salt into a large mixing bowl and pour in enough water to form a pancake-like batter. You can use your whisk or do it more traditionally by hand, just make sure there are no lumps. Pour half of the mixture into a jug for the second batch.

3. Grease the thali tray with oil, place it in the steamer and turn the hob on under the steamer to heat the water. You don’t want it to be boiling, just simmering.

4. Add a teaspoon each of fruit salt, bicarbonate of soda and citric acid to the batter and whisk quickly as it starts to thicken. Then pour the mixture into the thali tray, put the lid back on, turn the heat up to full and steam for 15 minutes. Turn it down to a medium heat for a further 30-45 minutes. Check with a knife periodically – once cooked the blade should come out clean when you poke it in.

5. Take it out and allow to cool and make the next batch in the same way. Then slice into squares and prepare the dressing.

6. For the dressing: heat a tablespoon of sunflower oil in a small frying pan, then add the mustard seeds until they start popping. Stir in the asafoetida and then turn of the heat. Pour in approx 200ml of water and then spoon over the bread, tossing it to coat.

Cook’s tip: Get ahead and make the bread in advance, then simply wrap in foil and re-heat in the oven, making the dressing when you’re ready to serve. 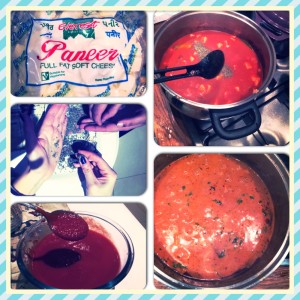 1. Mix the tomato puree in a bowl with enough water to make a soup like consistency.

2. In a large lidded pan melt the butter over a medium heat and then add the bay leaves, cardamom pods, cloves, black peppercorns, cinnamon, garlic and ginger pastes and stir, cooking for around 3 minutes.

3. Add in the puree and mix in with the chilli powder, garam masala, salt and sugar and taste to get the right balance of flavour and spice. Add half a pint of water, and simmer with the lid on for 8-10 minutes. If it tastes too salty at the end of this time, add some more water.

4. Add the paneer, breaking it up along with the fenugreek. Stir it all together and simmer for a further 15 minutes until the cheese softens and absorbs the flavours from the sauce. Just before you’re ready to serve, stir in the cream heating gently and then transfer the curry to a serving dish, garnishing both the curry and the bread with plenty of freshly chopped coriander.

Cook’s tip: Paneer cheese is pretty widely available in supermarkets, if you can’t find it get yourself to an Asian supermarket or why not try and make some. There’s an easy guide over on Maunika Gowardhan’s fabulous blog Cook In A Curry.