I put pizza on the table every week for the boys. It’s one of THOSE foods, you know, the cherished ones that they’ll eat no matter what and takes 10 minutes to cook.

For too long though, have I been putting up with the crappy supermarket versions because I’m too befuddled to think about faffing about making pizza dough.

However this has recently changed. I developed a children’s party food idea for Parentdish in the form of Christmas Tree Pizzas… 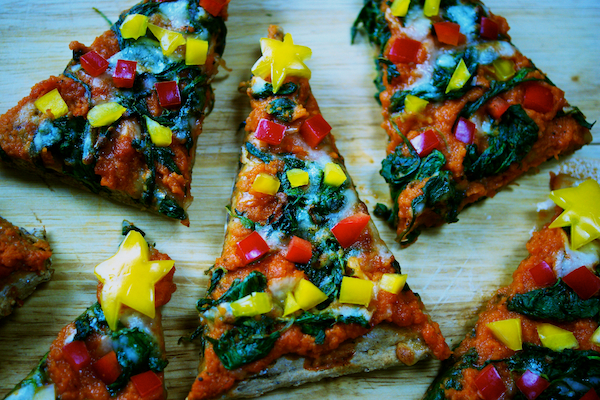 And I decided to try out using bread mix to make pizza bases with, as I’d seen it in various magazines and you know how much I love a shortcut!

The results far exceeded my expectations, and i’ve not bought a ready-made pizza since! Honestly – it takes about 15 minutes to put your pizza together including making your own tomato sauce. The difference in taste really does make it worth your while.

As does the cash you’ll save. It costs 66p for a packet of Sainsbury’s crusty white bread mix – and you get 2 generous pizzas out of that. The key is to split the dough in half, roll out and stretch as thin as you can to get a lovely base. It also helps if you have an electric mixer to take the effort out of it 😉

The tomato sauce is a tin of tomatoes with a dash of olive oil and some dried oregano all bubbled together in a little pan until reduced down and thick, which you can have on the hob while you make your dough. 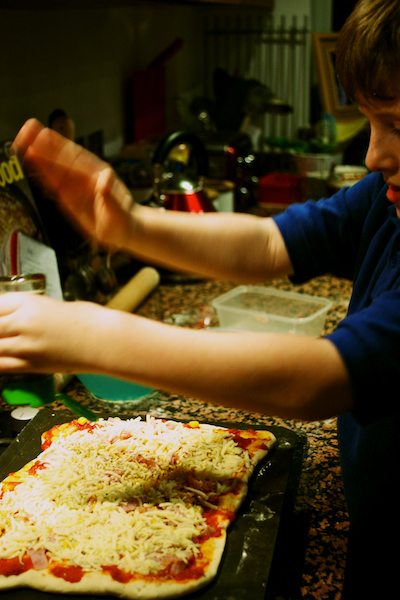 Sam gets stuck in topping his pizza

Toppings wise I let the boys scatter their own bits on, which is also a great activity if they’re bored – ham, sweetcorn, peppers etc. Matthew and I had sunblush tomatoes on ours which was divine. Finished with a generous sprinkling of  Sainsbury’s basics grated mozzarella to keep the costs down.

Have a go and see what you think! What are YOUR favourite toppings? Do you make your own pizza dough?

You can get the Christmas Tree Pizza recipe here on Parentdish – but here’s my basic version to get you started:

1. Put the breadmix in a large mixing bowl with the olive oil and mix until combined. Then gradually add the required quantity of water until a smooth dough forms. I find this easier in my electric mixer! Don’t add all the water at once or it may become too sticky.

2. Knead for 10 minutes – rest for five minutes and then knead for a further 5 minutes. Again this is far more relaxing with an electric mixer and frees you up to get on with the tomato sauce…

3. For the tomato sauce put all the ingredients into a pan with a pinch of salt and sugar, then bubble on the hob for about 15 minutes while your dough is kneaded. Remove from the heat and pour into a bowl so it cools a little.

4. Pre-heat the oven to 220C/200C fan/gas 7. Flour your work surface and two baking sheets. Take your dough and cut it in half. Roll out and stretch each of them until they fit the baking sheets. Prick over the surface with a fork and then bake in the oven for 5 minutes to firm up a bit.

5. Take out of oven and then spread each with the tomato sauce using the back of a spoon. Then scatter over your toppings, finishing with an even layer of grated cheese.

6. Back in the top of the oven for 10-15 minutes until golden and bubbling. Slice and serve with plenty of salad.