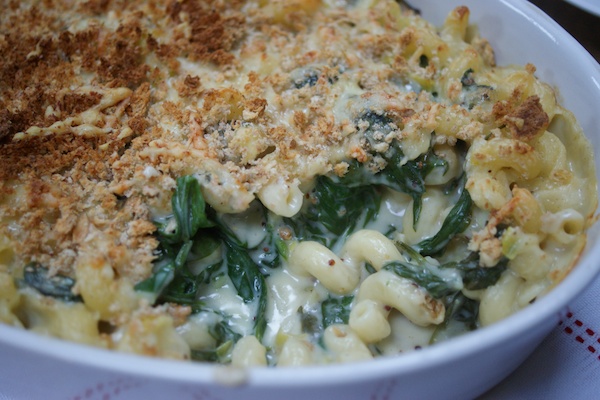 I found this recipe in October’s issue of BBC Good Food magazine – it’s the perfect one pot dish for a chilly autumn evening after the kids have got home from a session at the swimming pool.

I can’t seem to find the recipe on their website, but as I modified it to suit our tastes and portion sizes i’ll lay it out for you here in my own words.

1. Heat the oven to 190C/170C fan/gas 5. Put the pasta and leeks into a large saucepan with boiling water and cook for 10 minutes and drain.

2. In a separate pan make the cheese sauce by melting the butter then stirring in the flour, mustard and nutmeg to form a paste. Cook for about a minute and then pour in the milk and whisk until all the lumps disappear. Stir over a gentle heat for a few minutes until it thickens and starts to bubble at the edges, give it a couple more minutes and then remove from the heat. Stir two thirds of the grated cheese into the sauce until melted.

3. Place the spinach in a colander, wash thoroughly then pour a kettle full of boiling water over it until it has all wilted. Squeeze out all the moisture – I do this by pressing down on it with a potato masher.

4. Put the spinach, pasta and leeks all into the pan with the cheese sauce in and mix thoroughly. Turn out into an ovenproof dish. Mix the breadcrumbs with the rest of the cheese and then scatter over the top. Pop into the oven for 20-30 minutes until golden and bubbling. Serve in bowls.

Tip: The original Good Food recipe included a walnut crumble topping which I substituted with breadcrumbs made by blitzing a seeded wholemeal bagel in the blender and then mixing it with grated cheese. I think the topping definitely benefits from a bit of texture – whether that’s nuts or seeds. 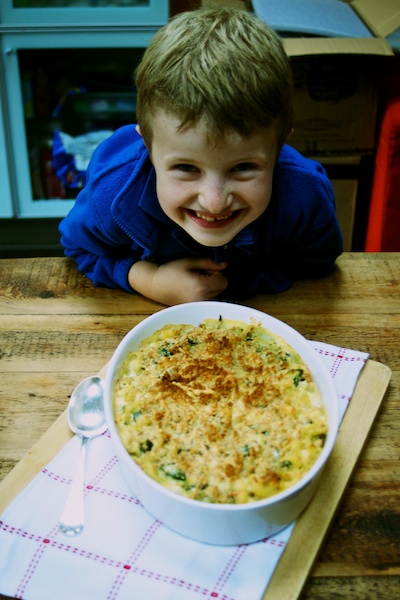 Sam came home from swimming just as I was photographing the dish and insisted on being in all the pictures… posh food styling is virtually impossible in our house!