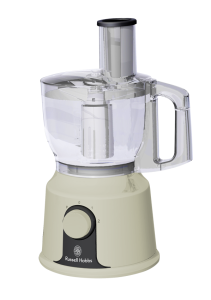 I’ve been given a Russell Hobbs Creations Food Processor to take for a spin, and it’s encouraged me to start batch cooking soups for quick nutritious weekday lunches.

I’ve never had a grown-up food processor before, just my trusty stick blender and mini processor attachment. They’re very good, but when it comes to volume i’ve always craved something with a bigger capacity that results in less splatting.

I’m going to review the Creations Processor as I use it, and  this was its first outing. It’s thankfully easy to put together and control and looks-wise it’s classy enough to leave on the work surface should you be using it often enough.

My first error was not to let my soup cool adequately before blitzing it. The steam forced the hot liquid out of the spout and all over me – grumpy probably best describes my demeanour at this point.

But after a bit of a wipe down and cooling off (me and the soup), I tried again and found the power of the blender attachment to be forceful enough to blend my soup in a matter of seconds. It’s easy to wash up, but sadly you can’t shove it in the dishwasher. 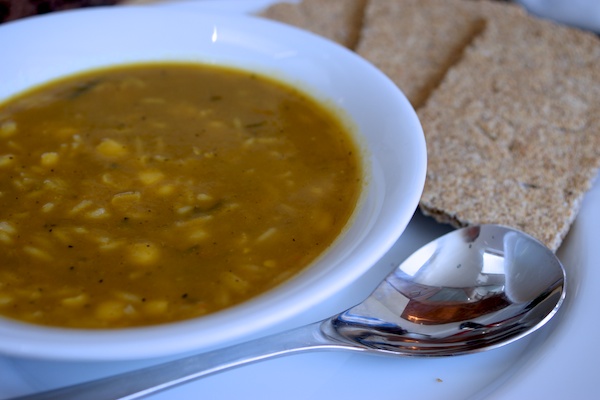 This soup recipe was born out of plucking some carrots and leeks from the allotment, I used a generous amount of rosemary (this also grows in abundance down the lotters) to give it a really robust flavour.

To make it more of a meal and also more appealing to the kids, after i’d made the main body of the soup and blitzed it, I added in some basmati rice and sweetcorn kernels to give it some texture and visual interest.

1. Heat the oil in a large lidded pan and then gently cook the leeks and carrots until soft. Add the rosemary and vegetable stock, stir well, put the lid on and simmer for around 15 minutes.

2. Remover from the heat and allow to cool. Blitz in blender or use stick blender in pan. Pour in the basmati rice and sweetcorn and heat gently for 10-15 minutes until the rice is cooked.

3. Serve in bowls or large mugs – kids might like to dunk buttered marmite toast soldiers in theirs!

Watch out for more soup recipes as i’m really quite getting into them. I’m definitely on a health kick and I find soups really fill you up.