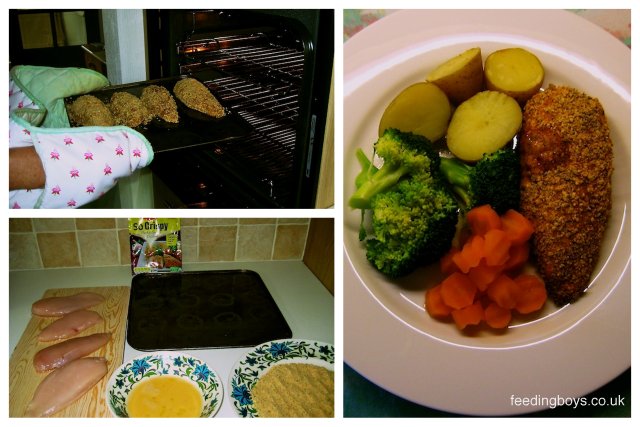 Maggi, a Nestle brand, have been around for over 120 years and make a range of soups, stocks, sauces, seasonings and instant noodles. Just lately they’ve enjoyed success with their new So Juicy range which uses a bag to cook chicken in, along with their seasoning which helps retain moisture and flavour. My friend cooked chicken portions using one recently which were really delicious.

I’ve been sent the So Crispy version, which are breadcrumbs in Herb and Garlic flavour. I passed them onto my mum to see what she would make of them, as she has history with the brand…

“I was looking forward to using the Maggi So Crispy as I had worked for Maggi as a Home Economist in the 1960s when I was first married. Then they only made packet soups and stock cubes.

I followed the instructions on the packet and found them very straightforward. As you can see in the picture it’s simply a case of dunking chicken breasts in beaten egg and then rolling them in the seasoned breadcrumbs before baking them in the oven. Five minutes preparation, 20 minutes in the oven – pretty quick for a mid-week meal.

The chicken kept moist and the coating was flavoursome. There was however some egg and crumbs left over so I added white breadcrumbs to the mixture and made stuffing for another day.

I would buy it as it is a quick and easy way to enhance a chicken breast, having a good herby flavour. A good standby to have in the store cupboard.”

Thanks mum – I think I’d be tempted to try it out on the boys with some home-made chicken goujons – brilliant play date food for the summer holidays.

Maggi So Crispy comes in three flavours: Herb & Garlic, Lemon & Herb and Chilli. Thanks to mum for reviewing the product and Maggi for sending the samples.