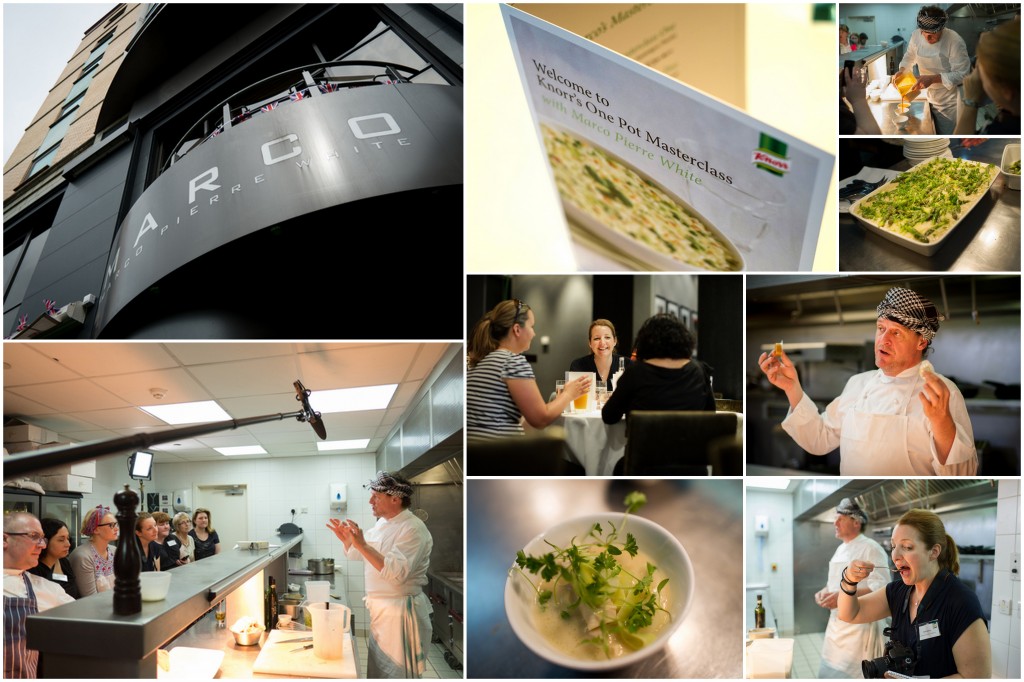 One pot cooking is close to the heart of many a family cook, so I was keen to get myself along to Marco Pierre White’s Knorr masterclass at his smart restaurant in the Chelsea Football Ground.

I have to admit to being slightly scared at the prospect of meeting the big man, but he put our group of food writers at ease with his informal chatty intro, encouraging us to ask as many questions as we liked.

While he’s tall and imposing, he’s softly spoken with a cheeky glint in his eye. I think it’s safe to say most of the women in the room were suitably charmed by his company 😉

MPW did all the cooking, leaving us to watch, soak up his advice and of course get to sample it all. The three dishes he made were all fairly standard family favourites – soup,  risotto and chicken casserole – but his approach to all three had his own unique spin and of course tasted a long way from ordinary. 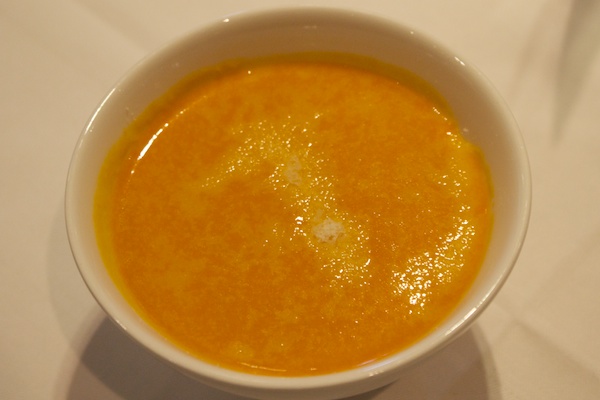 The soup was by far my favourite. Exceptionally smooth texture and incredible depth of flavours – sweet but with savoury tang from the parmesan. It didn’t involved a lot of ingredients but the addition of fresh carrot juice and parmesan cheese raised it up a few notches from the norm.

He blitzed it in the blender, but for that amazing velvet consistency he passed it through a sieve too. Find the recipe here>> 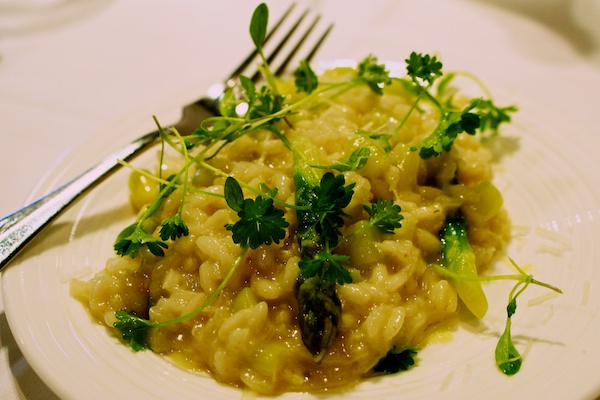 Creamy yet fresh – perfect comfort food for early summer, especially with the weather as it is. The key here was keeping the ingredients simple and using them to their full potential. See tips below and find the recipe here>> 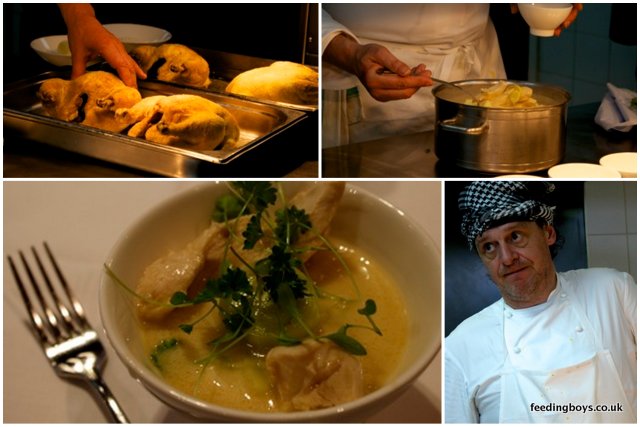 A super simple but elegant approach to the humble chicken casserole – the key is getting the sauce packed with flavour and using pre-roasted chicken for a tender result.

1. Seasoning
Use stock cubes/pots to season dishes instead of salt. Don’t worry if you haven’t got the matching stock cube/pot for your dish, use whatever you have.

2. Layers of flavour
Adding vegetable/fruit juices to soups and stews instead of just water can give your dish exceptional depth. For example Marco added fresh carrot juice to the pumpkin soup he made for us. He also advised using a mix of half prune juice half beer when making beef and ale stew to balance the flavours.

3. Don’t throw anything away
Marco said when he was working at La Gavroche, Albert Roux used to go through the bins to make sure staff weren’t wasting food. As an example for us MPW used the trimmings from the asparagus to give extra flavour to the stock for the risotto. He strained them out but was left with an extra level of asparagus essence for his dish.

4. Vegetable liquid
The water you’ve cooked your vegetables in can be boiled down to create another flavour concentrate to further intensify the flavours of your dish. MPW demonstrated this with the water released when steaming some chunks of pumpkin in the microwave. After he reduced it down in a pan he was left with a sticky, almost honey-like liquid that would make a fantastic glaze.

4. Keep it simple
Don’t use too many ingredients, don’t try too hard or get intimidated by the stove. Put food in the middle of the table and let your guests get stuck in rather than slavishly plating everything up.

5. Cooking for children
Get them involved with cooking their own meals and they’ll feel more inclined to eat something they’ve invested their time into. Concentrate on the colour and texture of the food you’re giving them.

6. To stir
MPW favours silicone spatulas for stirring his dishes. His pet hate is wooden spoons left lingering in sauces, absorbing the flavours and rendering them fairly unhygienic when used again.

7. And not to stir…
When you’re almost finished your risotto and have plonked the butter and cheese into your dish, put the lid on and just leave it alone and let it melt in for a few minutes. If you stir it straight away the texture will be tight and not the creamy oozy gorgeousness you’re aiming for.

8. For juicy casseroles
It goes against what i’d normally do, but MPW uses pre-roasted chickens for his casseroles. Because the meat has been cooked on the bone it’s far more tender. If you’re looking to cut corners on the time front you could pick up a pre-roasted chicken from the supermarket rotisserie counter, then all you’ve got left to do is make the sauce.

9. Saucy
MPW made a blonde roux – basically a white sauce but with stock instead of milk. For extra flavour he popped the chicken carcasses in for 5 minutes. For velvetyness he added a good glug of double cream and on the veg front he added some chopped leeks that had been sweated in butter. It’d make a glorious soup with or without the chunks of cooked chicken.

10. Parting shot
And finally, MPW asked us to remember always that cooking is a philosophy not a recipe, unless it’s pastry and then it’s chemistry!

All that was left to do was have my photo taken with MPW and scoot to the Chelsea FC shop to get the boys some pressies. Thanks to the team at Knorr and Marco Pierre White for such an engaging and informative day. 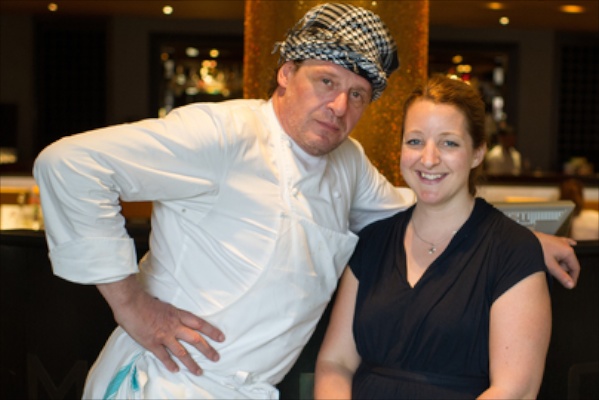