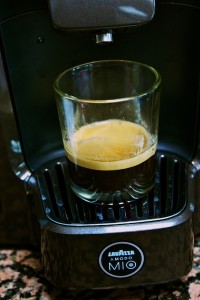 Coffee is frankly an essential part of my routine – things get done after i’ve had a shot of espresso.

So when coffee experts Lavazza got in touch to see if I was up for a challenge that involved making lots of coffee related recipes, I didn’t hesitate in signing up.

Lavazza are sponsoring the Wimbledon tennis tournament for the second year in a row, and so have created the Coffee Set Match blogger challenge to celebrate.

A group of food bloggers have all been sent  Lavazza Favola Plus Modo Mio machines to play with, so we can tinker in our kitchens to come up with the best coffee recipes we can muster.

To be honest, when my machine first showed up I came over all barista and we started hitting the cappucinos hard – the machine has a milk frother on it which is endless fun. But I’m finally back on task and starting the recipe work! 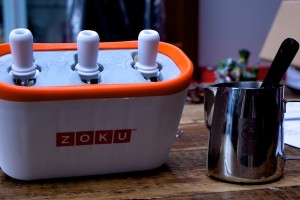 Waiting for the lollies to set

My first idea was to make a frozen treat.

My lolly moulds have died a death and I’d always wanted to try out the Zoku quick pop maker that rustles up lollies in a flash. So the kind folks at Lakeland despatched one across and I got on with the job in hand.

They’re really simple to use – you just keep the device in the freezer until ready to use, then pour in your desired flavoured liquid (sugary ones work best) and watch it set before your eyes in 10 minutes!

So my first coffee recipe is a creamy combination of espresso flavoured ice cream, sliced bananas and chocolate ice cream. Very smooth, definitely just for grown ups 😉 If you want to make a kiddy version just leave out the coffee – vanilla, chocolate and banana is yummy too. 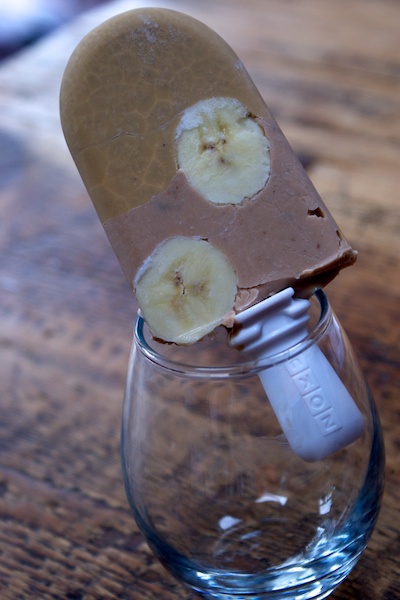 1. Pour the custard into two small jugs. Mix one with a shot of espresso and stick in the fridge.

2. Break the chocolate up into small chunks, put in a microwable bowl and melt in the microwave on full power in short bursts until fully liquid.

3. Stir into the remaining jug of custard until combined. It might not fully dissolve in and start to go a bit clumpy. This is fine as it’ll be like a chocolate chip effect when it freezes.

4. If you are using a Zoku quick pop maker, remove it from the freezer. Stick 3-4 slices of banana on the sides of each mould, then take the espresso flavoured custard and fill to half way. Leave to set.

5. Once this layer has frozen then pour over the chocolate custard up to the fill line and then leave to freeze completely. Turn out of the mould and repeat the process to make another 3 lollies.

Cook’s Tip: If you’re using a regular lolly mould then simply pop in the freezer after step 4, removing once it has set and then progressing to step 5 then popping back in the freezer until frozen.

To be in with a chance to win one the fantastic Lavazza Wimbledon prizes look out for promotional cups on take away Lavazza coffees, or enter online at http://promotion.wimbledon.lavazza.com/