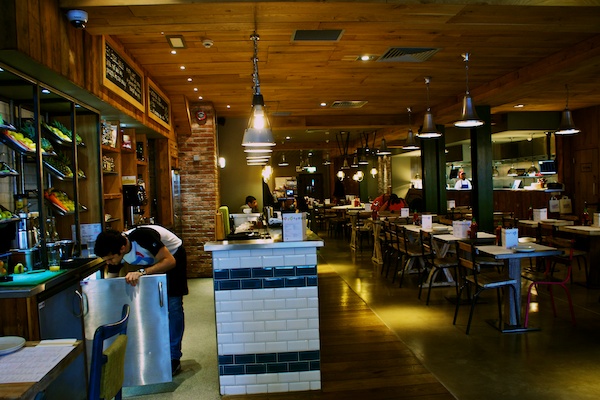 Tuk Cho rocked up in Ealing Broadway about four months ago, parked it’s neat little tuk tuk outside and set up shop as THE place to nab yourself some Asian market food in W5. 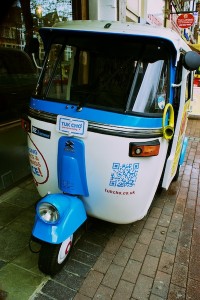 I’d not spoken to anyone who’d actually ventured inside, so I was super keen to check it out. Ealing doesn’t have the widest selection of decent restaurants, so a new independent offering is exciting indeed.

Sleek, modern, not particularly Asian – funky lights and a quirky mishmash of seating – a lovely round booth that looks like it’d seat 8 people, some high stools for lunchtime snackers as well as more standard tables and chairs seating 2-4 people or more if you pushed them together.

The walls of the bar area are lined with fresh fruit and veg ready to be pulverised into fresh juices.

The cuisine is a mixture of Thai, Cambodian, Malaysian, Japanese and Vietnamese, so for those who’ve spent their youth travelling South East Asia it’s a nice dose of nostalgia complete with a matching beer selection.

It’s a lot like Wahaca and Wagamamas –  a varied menu of street-food inspired dishes you order from and they arrive as soon as they’ve been cooked – hot and fresh but not always at the same time. The staff were friendly, happy to explain how it all worked.

To start off with we selected some street snacks: 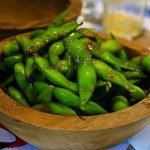 Now unfortunately we thought you ate the pods whole and were a little puzzled by the offputting grainy texture. Oops. Turns out you crack them open to eat the beans inside.

Maybe this is obvious to the die-hard street foodies out there, but sadly this was lost on us. 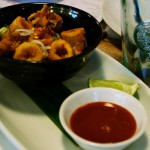 Muc Chien –  crispy calamari served with chopped chilli, spring onion and a wedge of lime. There was a lovely chilli-spiked dipping sauce on the side. We made short work of these – the boys really liked them. 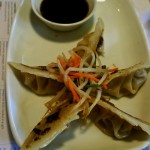 We then moved on to the mains: 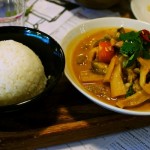 Kaeng phet pet yaang – a rich red duck curry with lychees hailing from Thailand – I had this with sticky rice and it was the right amount of spice to give some heat but blow your tastebuds to pieces, and not sickly sweet either. Generous portion size. 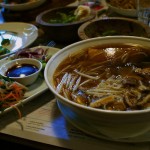 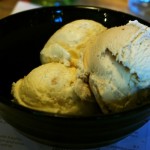 For dessert I chose two types of ice cream – stem ginger and star anise – delicately flavoured and a lovely way to finish the meal. I’d liked to have tried the asian basil flavour but sadly they’d run out. 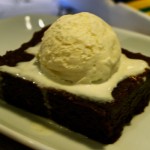 Matthew went for lime leaf choc brownie – and I have to say that’s a flavour combination I’ll be recreating at home. Divine.

Other desserts we didn’t try was Mango sticky rice, caramelised banana cake, and ginger and white chocolate cheesecake – plenty of mileage for those with a sweet tooth. 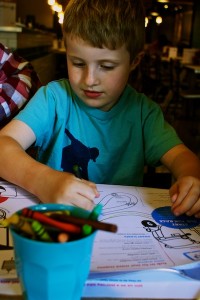 The boys were presented with their own paper placemats and tumbler of crayons. As per usual this occupied Sam but not Arlo. The wooden chopsticks fascinated them both, but of course neither managed to eat with them. We could have done with child-sized cutlery – this gets overlooked far too often in restaurants.

I was delighted to see they had a children’s menu though – two noodle based dishes, one fried rice dish and a curry. Nothing spicy and really decent sized portions.

I made the mistake of asking the boys what they wanted, but should have ordered them what I knew they’d end up eating. Piles of noodles and beansprouts are difficult for little hands to eat, whereas rice dishes can just be shovelled in with a spoon. 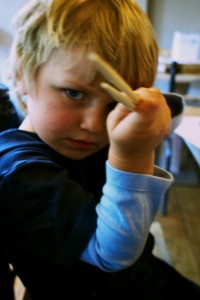 The boys ended up eating my sticky rice and picking the nuggets of fried egg and peppers out of their stir fries. Needless to say the table was an absolute state by the time we’d finished.

I think calamari and chicken skewers would be good additions to their children’s menu – food they can eat with their fingers is always a winner when you’re out.

There was just chocolate ice cream on offer for them for pudding – but of course this worked out just fine. In fact this was the most relaxing point of the meal as they just shut up and steadily worked their way through it, allowing Matthew and I to actually chat, drink our Singha beers and go misty eyed about our memories of Thailand.

While they are very accommodating for families, I think i’d rather go there with a gaggle of my local friends on a child-free night out. Matthew said he’d love to take his brother  as he travelled in South East Asia and would adore the food and vegetarian offerings. 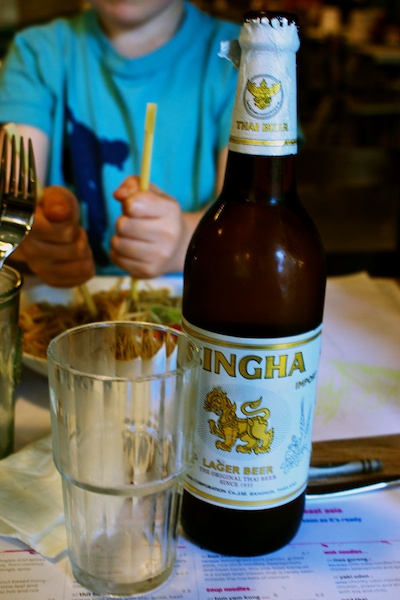 Singha beer and a chilled glass