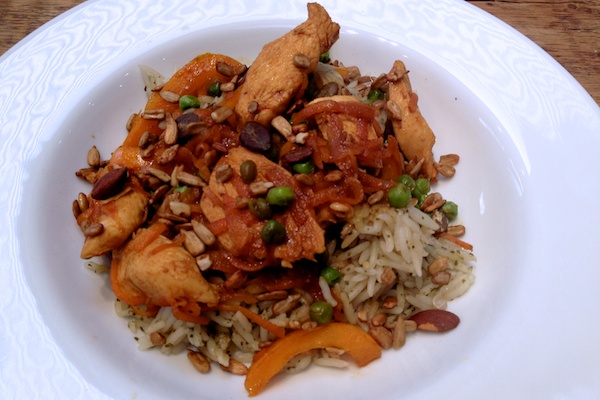 This is just a very simple marinade I used  for a chicken stir fry the other night, I had some spare oranges to use up, some maple syrup rattling around in the fridge and I always have soy sauce in my storecupboard. And that’s all you need.

I’m more than a little partial to those little sachets of Blue Dragon stir fry sauces, but there’s something a lot purer (and cheaper) about making your own. Plus you can adjust the sweet/salty balance to exactly how you like it.

I let the chicken sit in the marinade for an hour in the fridge and then stir fried it gently in the sauce, so the meat was thoroughly cooked but remained soft. In the last couple of minutes I added the chopped peppers, frozen peas and grated carrot.

I served it up with lazy person’s rice – Tilda pouches of steamed basmati rice that you shove in the microwave for two minutes – the boys go mad for the lime and coriander flavour.

I finished it with a liberal scattering of munchy seeds, to up the nutrition levels and to add some extra crunch.

We hadn’t had a meat stir fry for ages, we normally use quorn pieces, but as Matthew was working late and we had some chicken breasts in the freezer we went for it. It went down really well with the boys so i’ll definitely be making this again.

1. Place the chopped chicken into a small bowl and then pour over the soy sauce, maple syrup and orange juice stirring to thoroughly combine. Cover with cling and then chill until needed.

2. Heat a frying pan and then tip the chicken and marinade into the pan and allow to cook over a medium heat until the chicken has cooked through and the sauce has reduced a little.

3. Tip in the vegetables and stir fry for a few minutes.

4. Serve with noodles or rice and a scattering of toasted seeds.

And as it got a unanimous thumbs up from the boys I’m entering this into Ren’s Family Friendly Friday’s for April in the hope that it’ll give some fellow parents some meal inspiration.