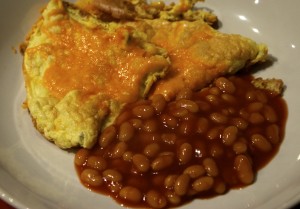 A riot of orange on a plate

This meal is no looker, but egg and beans are a great combo, especially when you’re in a rush to get some kind of nutritious meal on the table.

For us it’s Thursday nights when we’ve got back from football club at 5pm and the boys are cold and hungry and want their tea NOW!

On very rare occasions I will have cooked something in advance which I can then just heat up. However I’ve been so busy/sleep deprived/disorganised lately this has not been happening. So egg and beans it is!

So for this recipe I separated the eggs – whisked the whites with an electric mixer until stiff.

I then mixed up the yolks with some grated cheese, chopped basil and sweetcorn. You could use anything you like or had leftover in the fridge.

You then just fold the whites into the yolk mixture and then pour into a frying pan and cook for 4 minutes and finish off under the grill for a minute with some more cheese on top.

For the beans I added a few slurps of passata, a dash of soy sauce and a teaspoon of sugar. Sam loves baked beans anyway, but this just seems to make them really comforting.

It’s not going to set the culinary world on fire,  BUT my family ate ALL OF IT and it took about 20 minutes to prep it and get it on the table!

1.  Whisk the egg whites with an electric beater until stiff peaks form.

2. In a separate bowl mix the yolks with most of the grated cheese, mustard, sweetcorn and basil. Then add the fluffy egg whites and carefully fold in until it’s all combined.

3. Use either a really large non-stick frying pan for one big omelette, or a smaller one and do two omelettes. Heat a splash of olive oil in the pan and then pour in the egg mixture and spread out evenly. Cook for around 4 mins until it’s set underneath.

4. Scatter the rest of the cheese over the top and then flash under the grill for a couple of minutes until golden and bubbling.

5. Meanwhile gently heat the beans in a saucepan  mixing in the passata, soy sauce and sugar.

6. Slice the omelette and serve with beans.