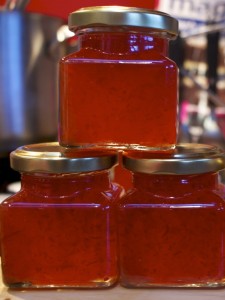 My dad’s had a bumper crop of chillies this year, so I offered to take a few off his hands so I could make some chilli jam.

I’ve never tried making it before, but love love love eating it! I’ve previously bought the Tracklements version which is delicious spread in cheese sandwiches, or as a dipper for sausages.

I attempted a couple of different recipes to see which would make the best, and it was Nigella’s version that came up trumps. There’s minimal fuss and no sieving involved.

The resulting jam is more of a jelly, vivid and fiery red with tiny flecks of pepper. It’s not overly spicy to be honest, just a bit of warmth but it’s packed with flavour, so it won’t blow your head off.

The only fiddly bit is preparing the chillis – my advice is to wear disposable gloves, or failing that use a fork to steady the chilli rather than your fingers while cutting and deseeding.

I’m going to give a few jars as Christmas gifts and donate some to the home made gifts stall at Sam’s school Christmas fair. 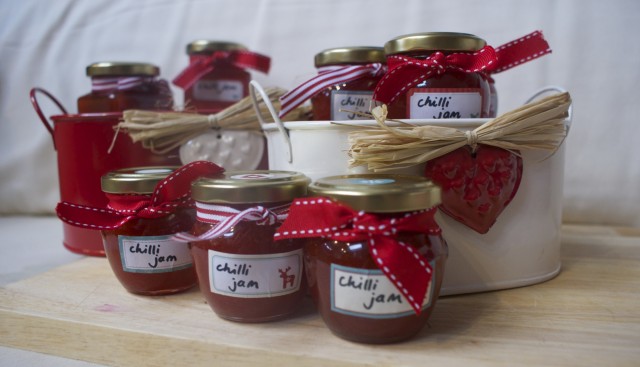 I packaged my batch up with the impressive range of home made gift supplies from Lakeland. They’ve got loads of gorgeous jars, ribbons, labels and pretty much everything you need to give your treats that professional look.

1. Wash up your jars in warm soapy water, rinse in hot water then air dry in a low oven.

2. Put the chillies into a food processor and whizz until finely chopped. Then add the bell pepper and pulse again until it’s all blitzed.

3. Put the sugar and vinegar into a medium-sized pan and dissolve over a low heat – swirling not stirring.

4. Add the blitzed peppers into the pan, turn up the heat and boil for 10 minutes. Take off the heat and cool for about 40 minutes when the liquid will have thickened to a syrupy consistency.

5. Ladle into your jars and seal tightly. Allow to cool completely and then label. 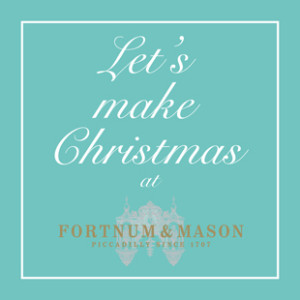 I’ll also be reserving one of these jars for a very special event at Fortnum & Mason’s being organised by Vanessa of Prepped fame.

It’s a food blogger gift swap where we all take a home made treat that is judged by top baker Dan Lepard. There’s then a very posh raffle where we all get to take home someone else’s gift complete with recipe.