I’ve been cooking some of the recipes from the Tesco Real Food Family Cook Off, currently showing on Channel Five which sees home cooks battle it out to make the most mouth watering meals.

Having been delighted with the inspirational roasted pepper pasta sauce idea from the show, I thought i’d give one of the desserts ago – namely the cheats lemon curd syllabub. 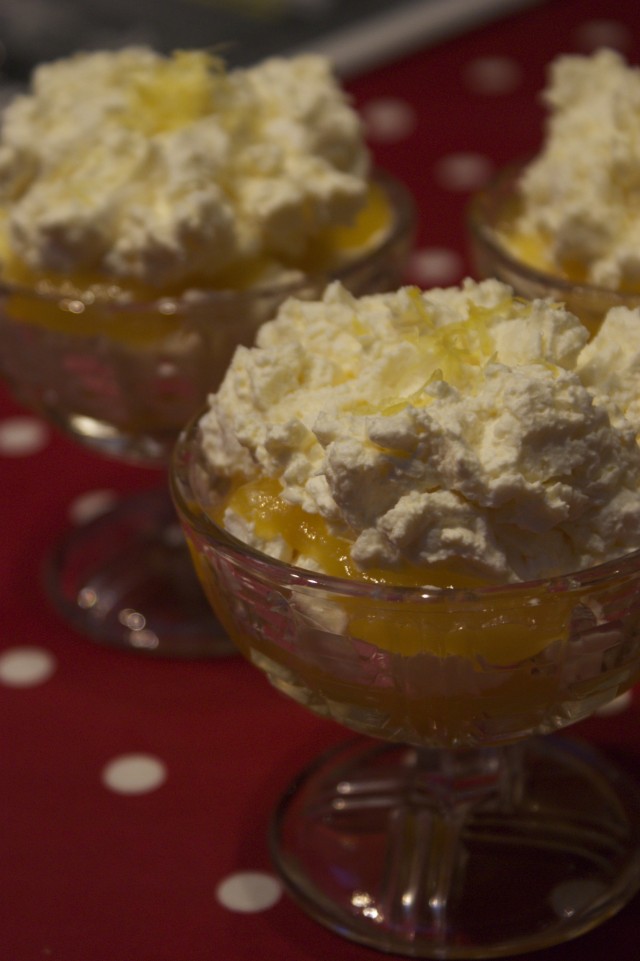 I ducked out of baking the coconut wafer biscuits that go with it – purely because I didn’t have time, and really wanted a dessert that can literally be thrown together in 10 minutes.

If you’re having people over for an unexpected meal, this is such a winning idea. It looks brilliant and a lemony pudding tends to go down well with most people. It looks even posher if you were to put it in wine glasses so you can really see the layers of lemon and cream.

1 jar lemon curd – not the cheapy stuff – or make your own!
300ml double cream
8 meringue nests, broken into pieces
lemon zest, to decorate

1. Spoon a small amount of lemon curd into the bottom of 6 sundae glasses or wine glasses.

2. Whip the double cream until it forms soft peaks. Add the crushed meringues to the bowl and carefully fold them into the cream.

3. Add a layer to the serving glasses. Keep alternating the layers of lemon curd and cream until the glasses are full. Scatter with a little lemon zest.

4. Ideally chill until they are set, but we didn’t bother and they were still yum 🙂