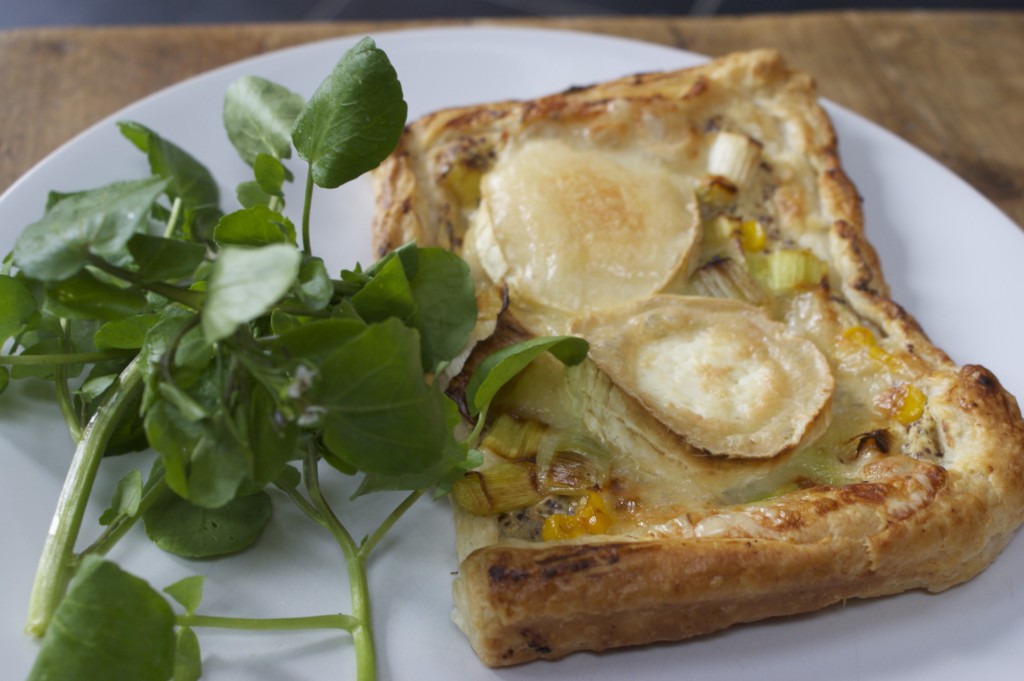 Smart enough for a dinner party starter but equally at home on a chipped plate for a quick weekend lunch – however you want to set the scene for this tart, it’s super speedy to prepare.

The in-laws were mega impressed with this meal which is always a bonus, especially when I want to repay them for helping me so much with the boys this week while Matthew’s away with work. The least I can do is lay on a good spread every night when they’re taming the beast that is Arlo.

The recipe itself was born out of a bit of product testing. I’m being inundated with samples at the moment so have been desperately trying to get through them all!

The first item i’d been sent was the new by Sainsbury’s range ready rolled puff pastry. I normally buy Jus Roll, having previously been non-plussed by the supermarkets’ efforts.

I was very impressed with the performance and taste of this new Sainsbury’s pastry – it puffed up a treat and had a very pleasant buttery taste. Definite recommendation.

The second sample I got sent was from  Capricorn goats’ cheese based in Somerset. It’s a really lovely cheese and I love the way they attribute their cheeses to specific goats. I blame the many years of writing animal-based stories at Newsround… bit soft me.

I was meant to be making a specific recipe as part of the campaign to support Beryl the goat, who’s currently locking horns *cough* with her rival Ethel – you can see what it’s all about here should you also be partial to seeing animals wearing funny outfits.

I rebelled and plumped for using it to top my tart instead, and mightily glad I did as it was properly lush.

1. Pre-heat the oven to 200C. Grease a baking sheet and unroll the puff pastry onto it. Cut into quarters and then fold the edges of each portion in to from a 2cm border.

2. Melt the butter in a pan, add the leeks and soften over a gentle heat for five minutes. Add the sweetcorn to warm through for another minute then remove from heat.

3. Mix the creme fraiche and mustard together in a small bowl then spread evenly across the four tarts, then scatter a layer of the buttery leeks and sweetcorn over the top.

3. Place two discs of goats cheese on top of each tart, brush the borders with a little milk and then bake in the oven for 20 minutes until the pastry is puffed and golden. Remove and serve with watercress and a drizzle of balsamic vinegar. If you’ve got some chutney knocking about that also works a treat.