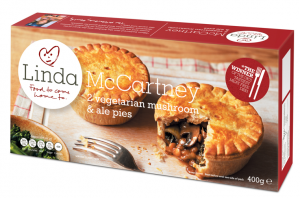 I’m constantly on the look-out for tasty meat-free meals that I can whack in the oven on a busy weeknight. It’s certainly felt like pie weather lately, so I was delighted to be sent a sample of Linda McCartney Mushroom and Ale Pies.

They are the result of the ‘Search for the UK’s Tastiest Meat-Free Dish’ competition run by Linda McCartney foods and won by home cook Kate Ford who came up with the delicious recipe.

You can find them in Sainsbury’s and cost £1.99 for a pack of two, which I think is pretty good value as they are pretty substantial offerings.

They come frozen in little foil dishes, you simply brush with a little milk, beaten egg or milk alternative and then bake in the oven for 30 minutes. They puff up beautifully and turn an attractive golden colour.

The pies were easily removed from their foil cases and once sliced open revealed a hearty amount of mushrooms and lentils in a really rich looking gravy. The over-riding flavour was the ale, perhaps a little overpowering, but really very tasty and so filling I didn’t even consider a snack for the rest of the evening.

Because of the pastry I’d just serve with plenty of steamed greens, as mash would just be too much stodge.

Are you a meat eater trying to eat less meat?

It’s not just the ethics of eating animals, it’s also about the cost of your weekly shop, not to mention the impact of meat production on the environment.

Environmental group Greenpeace estimates that every kg of beef we eat represents roughly the same greenhouse gas emissions as flying 100km and the group, Compassion in World Farming, estimate that if the average UK household halved its consumption of meat, this would cut more emissions than if they cut their car use in half.

Compelling stuff. If you want to find out more head on over to the Meat free Mondays section of Linda McCartney’s website…

Thanks to Linda McCartney for my delicious samples

p.s. I am still eating meat, just a lot less!