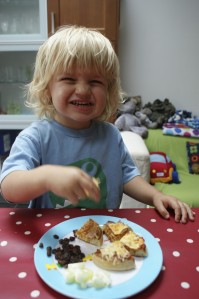 Feeding toddlers is rarely a treat for an enthusiastic cook like myself. It really doesn’t matter what you decide to make you’re always on the back foot.

You can never possibly make it quick enough – once the hunger-bellowing-rampage kicks in it’s a full-on scramble to assemble  a balanced array of food.

Arlo’s lunches are rarely anything that resemble a normal meal – more a collection of ingredients chopped up small and thrown at a plastic plate.

And you can pretty much guarantee that moments later it will be peppering the kitchen walls and floor, and for the final flourish it will be rubbed with great gusto into my son’s white blonde locks as if it’s hair gel.

It’s often hard to get a grip on what he’s actually managed to eat. So with this in mind I’ve come up with a great little lunch idea that’s mega quick to put together. If you’re feeling particularly brave you can get your toddler to help you make it as it’s very simple. 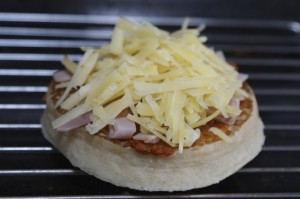 The concept is basically using a crumpet as a pizza base, spreading it with tomato or sun-dried tomato paste or even pesto, a scattering of chopped ham and then a liberal sprinkling of grated cheese.

Whack it under the grill for a few minutes until the cheese is golden and bubbling. 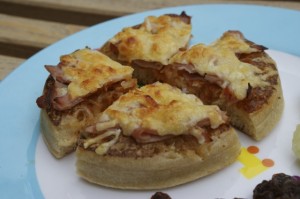 It’s totally up to you what you stick on there, and is fab way of using up leftovers or cheese that’s going a bit hard.

Crumpets are lovely and soft, so easier for littlies to get their developing teeth into rather than hard pizza bases. I also use muffins as pizza bases.

It depends what’s on offer at the supermarket – crumpets are currently half price at Sainsbury’s 🙂 30 of your English pence for an entire packet of 8!

So what to serve on the side? I usually default to chopped cucumber and cherry tomatoes, but this time I opted for some raisins and celery with a twist.

As salad items go it can be a bit stringy and chewy, so I slathered some cream cheese up the middle of a stick of celery then cut it into thin slices. 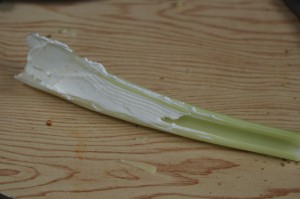 Arlo thought they were delicious and ate at least half of them, which I was mightily chuffed about because he can be a tad tricksy when it comes to greenery. 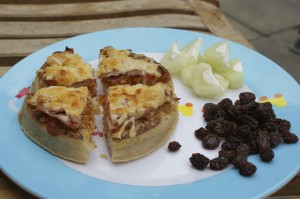 « Win Morphy Richards Compact Breadmaker worth £99.99!
Cherries and berries jam, and the joy of scum! »